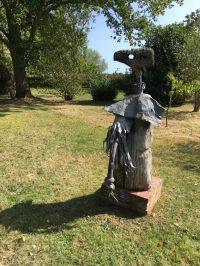 When Ami Bouhassane, now co-director of Farleys House and Gallery, was born, her mother’s quest to find a family likeness led to the discovery in the attic of 60,000 negatives of photographs taken by her grandmother Lee Miller – muse and model turned war photographer, who documented the horrors of World War Two.

The treasure trove transformed the life of the family.  It set up the Lee Miller archive in 1977, followed by a family trust.  Ami’s father, Antony Penrose – Miller’s son with the artist Roland Penrose – embarked on world tours to talk about his mother’s extraordinary life and work.  The team also curates exhibitions of her work to be shown internationally.

In turn, the international exposure generated interest from those captivated by the Miller story to travel all the way to Muddles Green to discover the Sussex farmhouse, where Miller lived with Roland Penrose and entertained such illustrious guests as Pablo Picasso, Man Ray, Max Ernst and Leonora Carrington.

In pandemic times, the world tours are on hold and the Farleys House visits, always small-scale, have slowed to a trickle, throwing the economics into jeopardy.  Previously, well over 100 visitors a day could visit the family home.  Now, the daily intake is below 20, Thursdays and Sundays only, and booking is essential.

Those who manage to get to the front of the online queue for the handful of tickets are transported into a world of life intensely experienced and seen through a surrealist prism.

The tour begins in the kitchen, where Lee Miller, in part to keep warm in a cold farmhouse, in part to recover from the horrors of war, discovered another talent: cooking with a hint of the surreal – Muddles Green chicken, for instance, gold fish and blue spaghetti.  She cooked on an AGA beneath a Picasso wall tile, which Patsy, the devoted housekeeper, who largely brought up the young Antony, cleaned with Vim.

The other rooms we see are the lounge, dining room, hallway and study, all packed with art and memories.

The dining room is remarkable for its yellow walls – the yellow of Farmers Weekly magazine to which the household subscribed and which complements the sun of the painted fireplace – a surrealist interpretation of the significance of the Long Man of Wilmington, a chalk hill giant figure that can be seen from the farm.

Roland Penrose’s pictures adorn a dining room wall, though we are told he was too modest to display them when he lived there.  Instead, the surrealists collected whatever caught their eye and placed it in a dresser, democratically placing Picasso ceramics next to figurines picked up in junk shops.

The lounge is where we learn how Miller’s career as a model began after she fainted following a near-miss road accident in New York City, near Poughkeepsie in the state of New York, where she was born.  She fell into the arms of Condé Nast, publisher of Vogue, and he immediately spotted her beauty and style.  Her modelling ended just as swiftly when Miller posed in a publicity shot for Kotex, maker of sanitary products, in times when such matters were not discussed.  Suddenly no-one would employ one of the top models of her day.

We don’t know her motivation, but for the convention-defying Miller, the shot proved a way to make a statement and free herself for her even more illustrious career behind the camera.  She learnt some of her photographic skill from Man Ray, who was also her lover and the pair remained friends even after Miller’s thunderbolt meeting with Penrose and move in 1949 to Farleys.  It was there she recovered from the trauma of war reporting and had a difficult relationship with the young Antony.  He was depicted as a lizard in the belly of the pregnant Miller in a painting by Roland Penrose on display in the study.  It sums up the complex emotions that surrounded the dazzling but difficult Miller.

With his daughter and co-director Ami, Antony Penrose has devoted himself to curating the massive archive and keeping his mother’s aura alive.  The task has become far more difficult as a pandemic ravages every part of the economy and its impact on the arts is severe.

Farleys House is relatively lucky as two of the exhibitions that take years of work and planning are on international display in Zurich and Germany, but the crippling uncertainty of our times means another five cannot be toured.  In addition, other smaller contributions to exhibitions around the world cannot be made.

Those who manage the journey to Muddles Green get to see one full-scale exhibition and two smaller ones, as well as to tour the house.

Surrealist Lee Miller, housed in a cattle-shed converted into an exhibition space, explores what we are told was Miller’s desire to look beyond what is “real and readily observable” to find unexpected discoveries.

The photographs on show include two of the most remarkable in the archive.  A Portrait of Space was taken in Egypt, where Miller lived with her wealthy Egyptian husband Aziz Eloui Bey, and is regarded as her expression of how trapped and filled with longing she felt.  It shows a tear in a net, like open lips, through which we look into the desert where, seen through a surrealist perspective, we can imagine eyes in the dunes.  The image inspired Magritte to paint The Kiss.

The other stand-out of a wealth of outstanding images shows Miller in Hitler’s Bath.  It was taken by Life photographer David E.  Scherman, who was instrumental in Miller’s becoming a war photo-journalist.  The pair had just been to Dachau concentration camp and the dirt on Miller’s boots on the bath map is from the camp.  Miller and Scherman had gone to Hitler’s apartment in Munich after receiving a tip-off from the signal corps that the U.S.  army had taken it over as a communication post.  It was “in perfect condition,” Miller wrote, and had electricity and hot water.  In the photograph, Miller is sponging herself, mirroring the action of a kitsch figurine placed on a washstand, and looks up warily as if haunted by everything she has just seen.

Even for the mere gallery viewer, spared direct contact with the atrocities Miller witnessed, there is almost too much to digest.  The surreal and the real are almost inseparable, or as Antony Penrose writes in his book to accompany the exhibition: “On reflection, I realise that the only meaningful training for a war correspondent is first to be a surrealist – then nothing encountered is too unusual.”

Another terrible, magnificent photograph is Miller’s shot of the bombed Cologne Cathedral.  The rubble of the roof covers the floor at the foot of the towering Gothic columns.

The image finds a shocking echo in Miller’s detail of released prisoners in striped dress at Buchenvald in 1945.  The image is cropped so we only see the bottom half of the prisoners in their striped trousers and dusty boots next to a pile of bones, like human rubble.

Mild, when compared with such extremity, the smaller Lee Miller exhibition Grim Glory shows photographs of the British war experience and the Blitz before she covered the European war.  Miller documents the women’s war effort and their bravery.  The female searchlight operators, for instance, were in the line of fire as the enemy aimed at the light and they suffered heavy casualties in the war.

She also focuses on objects that imply the human drama.  Piano by Broadwood 1940 shows a fine grand piano devastated and Remington Silent, marketed as the quietest of typewriters, shows a shattered machine.

While Miller’s images are a cry of pain at the horror of war, the other small-scale exhibition on show until October 29 is a modern-day plea for peace.  In The Home Front, contemporary photographer Melanie Friend explores the link between the military and entertainment in the United Kingdom, with a particular focus on public air shows at RAF bases and above seaside resorts.  The juxtaposition of cheerful ice cream vans and fighter jets, and the sight of a young boy, mother looking on, relishing the chance to hold a gun, is a chilling a reminder we have yet to learn the lessons of World War Two.

Visitors can recover their emotional poise in the farm’s garden, which naturally is full of sculptures, including Antony Penrose’s fabulous Sea Creature made of oak and lead and the fountain designed by his father Roland and constructed by him.

All is open to the public until the end of October.  After that, the future, as for so many small and even large-scale galleries, is uncertain.