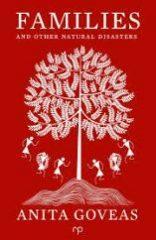 Families and Other Natural Disasters

From the very titles on the five sections of this book, we understand Anita Goveas is going for the “elemental”: Fire, Water, Wind. Also Love and Families, which, combined, might be the very earth of the equation, earth-air-fire-water, the classical elements as proposed by Empedocles and others. These fifteen brief tales describe the “education” of various Indian characters, in the basics of life, the elements, indeed. In the first section, Fire, a girl is leaving home in the story, “A Pilgrimage Can Be One Way.” She inventories the things she brings, including “Roopa’s” ashes. We’re not sure who Roopa is, but we know she is important (Mother? Sister? Grandmother?). And in the very next story, “Defeating the Demon,” we read about a little boy, Charun, whose mother, Aunty Tripta (not really a blood aunt) has left him and his brother with the narrator’s family. It is Diwali. “Mum’s always told the story of Rama coming back after defeating Ravana while she lights the diyas, but this is the boys’ first Diwali with us, and they don’t know how we do things,” the narrator tells us, and “It wasn’t easy, going from being a mostly ignored only child to being a big sister overnight.” Her mum named her Krishna; she obviously wanted a son. In the end, Krishna considers leaving her mother.

In the Water section, it’s serpents and more family lessons. We’re in London, and along with the second-person narrator, we learn about Nana, a benign but vaguely threatening (to a child) person in “Various Histories of Sea Serpents,” and similarly in “Warning Systems,” the Da Sousa family. The last word in that story is the command: Run. “Finding Venkat” likewise illuminates the collection’s title, for this family is another “natural disaster,” though the narrator concludes, “Venkat left most of his money to charity. I didn’t expect anything else, but he’d left me his daughter and a lot of random facts about sea creatures, and somewhere in that is trust and acceptance. That’s more than enough.” Trust and acceptance.

All five sections contain three stories each, an elegant symmetry, cycling often from first- to second- to third-person narratives. Wind has more lessons, from a metaphor about sailing – for which “wind” is essential, of course – to the lesson in “Knowing the Answers,” which concludes, wise but with humility, “Sharing is something I’ve learnt to do.”

Finally, in Wind, in the story, “Let’s Sing All the Swear Words We Know,” another girl comes of age, understanding the mystery of individuality, a hard lesson to learn. “Your mouth says ‘fuck you’ without you having to open it. You’re a girl with grapefruit-shaped breasts and a watermelon bottom. You watch the boys as they watch you. You don’t have the words to make anyone stay, you talk to yourself when no one’s listening. You leave as soon as you can and go back every weekend cos nobody else knows the words to your song.” Now that lesson sings.

These first three sections prepare us for the even more elemental parameters of life – love and families. The stories in Family and Other Natural Disasters involve so many girls coming of age, related with a muted sympathy that is both amusing and heartbreaking. While the Nana character appears in three of the stories (perhaps a different Nana), the various revolving characters in all of them engage our sympathies as they negotiate the “natural disaster” that is living in close quarters with other people.

The penultimate story, “And Reverse,” begins, “Everyone knows that Uno is Mingel’s game. His loving older sister has suggested it specially to calm his nerves after the torment of introducing his gentle Hindu girlfriend to his observant Catholic mother.” You can already see the complications coming in that family! Yet, the final story in the final section, Families, “Virmala Nagra’s Hypotheses on Marriage and Motherhood,” seems to sum up the whole chemical equation that is husband/wife, parent/child, siblings and grandparents. This is a collection whose subtle wisdom stays with the reader long after putting the book down.