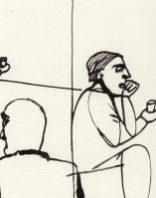 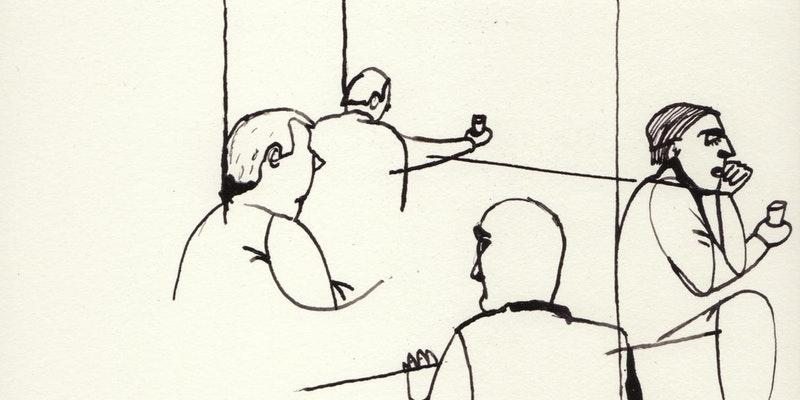 Curated by art historian, poet and experienced curator Simona Nastac, ‘Polyphonic’ is an event that adopted the credo of Romania at the 2018 London Book Fair and European Poetry Festival: ‘writing and making history’. On the occasion of the Romanian Centenary, Nastac appealed to a singular aspect of Romanian social history: the ethno-cultural diversity that Romania, through its crucial geographic location, has come to possess throughout the centuries. She brought together ten poets living and writing in Romania from several different ethnic backgrounds, including Hungarian, Moldovan, Ukrainian and German. They are Michael Astner, Andrei Dósa, Robert Gabriel Elekes, Matei Hutopila, Henriette Kemenes, Claudiu Komartin, Mihók Tamás, Aleksandar Stoicovici, Livia Stefan, and Victor Tvetov. The show was produced by the National Museum of Romanian Literature in Bucharest and presented by the National Book Centre and the Romanian Cultural Institute in London.

‘Polyphonic’ is a representational endeavor, including musical interventions, as the metonym would promise. The evening’s polyphony began with a folkloric piece performed by two violinists Ioana Forna and Adriana Cristea. The liveliness of the twin instruments, braiding notes by converging and diverging, spoke to what had been initially proposed: harmony, in principle, arises from the unification of different notes. The musical pieces are composed by Romanian-born, Jewish-Hungarian György Ligeti, a composer of classical music and a master of micropolyphony. The violin piece, Ballad and Dance, is inspired by Romanian folklore. The second piece is entitled Cello Sonata.

Each poet read his or her poems in the original language, with translations presented on the screen. This gave a quality of double resonance to the poems, opening meaning to an audience that may have had less opportunity to consider poetic nuance from purely oral reception. The animated illustrations that accompanied several poems, created by Raluca Popa, displayed a varied range of styles, appropriate to the tone of each poem, and were so aesthetically pleasing that one was sorry not to see more of them.

Michael Astner’s work demonstrated that contemporary poetry, often so alienated, can still breathe the simplicity of pastoral songs: ‘I had forgotten/how long they can be / November evenings’. We include a sweet and surprising poem for flavour:

Andrei Dósa was memorable in his mastery of narrative energy: ‘don’t wish for causality what you wouldn’t wish for yourself’, he advises in one poem that, like his others, is deeply rooted in the quotidian. Readers who prefer sharp-fanged poetry that flaunts its power of imagery will enjoy Elekes:

Bulgarian-British cellist Nikolay Ginov graced the event with an interpretation of the jade-green Sonata 4, a pensive piece that recalls our struggle to patience with its winding undertones. In this sense I dare to say that such a piece speaks to our anxieties – appropriately, given the overarching tonal content of the poems read.

Matei Hutopila’s poems are characterized by Eastern European irony with a singular rhythmic dynamism in free verse. Henriette Kemenes is a poetess with a specific, formed vision, who describes happiness as something which sticks to sneaker soles like bubble gum, ‘the smell of almond skin, / mottled a day before.’

Claudiu Komartin was present as both a talented poet of depth and as a forceful representative of his generation who is known to be one of the most prominent Romanian poets of today. Mihók Tamás’s poetry is intriguing in its willingness to provoke a reaction. Aleksandar Stoicovici’s poems are simultaneously placid and sensitive. Livia Stefan described ‘the way the light runs through the city, almost insane’ in a ‘urban concentration camp of freedom’.

Waves foment beneath the quiet for all of these poets, and it becomes apparent that, despite the diversity of voice and tone, it is the same universe that they write of. Those who believe that humor is our lantern in times of grief can look forward to following contemporary Romanian poetry.

The event culminated with a multilingual recitation in chorus, prioritizing a theme over linguistic or geographic restrictions – in other words, each poet presented a poem in his or her language on the topic of food. Interestingly, a translation did not seem necessary here, as it was in this apex that polyphony came together linguistically, thematically, musically. For practicality’s sake, one cannot discuss each poet here, but it would be an error to omit mentioning that all were memorable – and charming in unison. The medley proves that as well as being a talented poet herself, Nastac is a capable curator. A rare and noble mixture!

Poetry today is emphatically performative, as has been noted in most of the events of the European Poetry Festival. Overall, one might consider that the act of performance is in fact an act of sincerity: it takes courage to lay it bare, with or without a mask. After all, if we are to believe Pound, there is truth in sincerity (as is best exemplified in Pound’s own ‘The River Merchant’s Wife’). The sensibility is genuine, travestied as it may be.

What have we concluded from participating in the European Poetry Festival this year? To be generous with our definition of poetry, to withhold prejudice from contemporary breaches. That the disturbing can be the ingredient that transforms confessional poetry into…remarkable poetry. That for more than one poet, a grandmother is often the worthiest, funniest, most tender muse one can hope to come across.

The event debuted at the Romanian Cultural Institute on the 11th of April. Future events will be held – such as at The Bucharest International Festival of Poetry on the 19th of May.