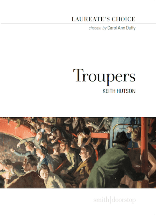 Few collections can have such an inviting start to the ‘About the author’ notes: ‘Keith Hutson has written for Coronation Street and many well-known comedians.’ Here’s a poet with proven experience in timing, the varied rhythm and patterns of everyday speech, the ability to make every word earn its place, and all underpinned with humour. Having already encountered his work in magazines – The North, The Rialto, and Magma among them – I’d been waiting for this pamphlet. It’s every bit as good as I’d hoped.

Hutson’s Troupers are the acts and comedians who, night after night, tirelessly entertained audiences wherever they could be paid for doing so; they were artists who knew nothing else, worked themselves into the ground and, too often, died in harness. Over half of these 28 poems are in memory of once-famous names and acts. What holds them together is their determination to carry on making lightness out of everyday misery, their resilience and refusal to give in. So the opening poem, ‘Revival’, doesn’t directly name the comedian but lets one man stand for all who will follow

Hutson handles the colloquialisms with precision – ‘that look’ is full of hidden meaning; it’s the coded gossip over the fence, the folded arms and nod that prefaces the bad news coming in the next line. And while ‘slap and …’ expects ‘tickle’ as its resolution Hutson gives it a new twist; there’s more affection in ‘cuddle’ but also, in retrospect, more angry reaction in ‘slap’. On the facing page there’s a clue to a possible identity: a quotation from Les Dawson, who’s a good match for the description. He was one of the many who ‘… sweat buckets/ under stress, and make that state hilarious.’ They made compulsive watching and, as Hutson tells us in the closing lines, ‘And why it’s only right/ to raise another smile, to bring them back.’

That’s what this pamphlet does. You may not know Professor Cheer (1879-1938) but the title – ‘The Man With The Xylophone Skull’, where even the excessive use of capital letters recalls the style of end-of-the-pier-show posters – returns him to us, this ‘prematurely bald/ headmaster’ who turned ‘… what/ should have stayed a daft percussion act at school’ into a touring act, beating tunes on his skull with a brass door handle until concussion wiped his memory. He lives again in this neat sonnet, a form that Hutson frequently uses, and uses with sufficient variety in the layout to prevent it becoming predictable. The constraint of fourteen lines (and some are fourteen-line poems rather than more traditional sonnets) suits the tightly-drawn focussed biographies where personal details may be scanty. in ‘Accept No Imitations – i.m. J D Plummer 1846-1901’ the octet races through how JD (not even a full name) reacted after his cast quit after the first night and ‘… played every character/ himself: Dick Turpin, victims, innkeeper/ and black-eyed daughter Bess, Dick’s worn-out horse,/ also called Bess, and black …’ The sestet describes the result

The half-rhymes, the speed (nicely pointed up in ‘at a gallop’), and the use of the caesura to add weight and emphasis to the summing up; like a good comedian, it’s the timing that carries the poem, right through to the last word. ‘Worth it, though,’ – the poet stepping back from his subject, and in that phrase JD’s achievement lives on.

There are more recent performers commemorated, too, comedians my generation still remember. In ‘A Funny Thing Happened … i.m. Frankie Howerd 1917 – 1992’ Howerd, recalls the ups and downs of his career, with Hutson mapping his cadences and some of his catch phrases. ‘No! Missus! Nay! Thrice nay! Titter ye not!’ – that should stir your memory. But Hutson’s word-play and cadence is a match for Howerd’s; here’s the second stanza in full

The camp relish of ‘gossip in a toupé’, the mother/son relationship, and the pain in Hutson’s play on ‘bitter out’ (better out) creates a more complex character than the stage persona. The reminder of attitudes ‘in those days’ casts a chill, lightly sketched but accurate.

There are unnamed performers, too. ‘Straight man’ is a direct address to the reader – ‘You think you could be me, don’t you?/ The nobody who’s only there to prop/ the patter up.’ – showing the skill behind the role, how much support goes into being dull and being the contrast, when the only reward is lack of recognition.

There are venues, too, like ‘Glasgow Empire’. The Guardian’s obituary for Ken Dodd quoted Max Miller who, when invited to play the Glasgow Empire, replied that he was a comic, not a missionary. As Hutson notes (or reminds us – after all, you might have been there)

Writing about Troupers, Carol Ann Duffy pinpoints the heart of this collection: ‘These poems illuminate something timeless about ambition and the human spirit.’ They do, and with skill, word-play of a high order, humour and sympathy. One word of warning: don’t read this pamphlet on the bus unless you like weeping with laughter in public.

One for the Road Polyphonic: Animated Poetry and Music