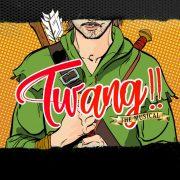 As far as 1960s audiences were concerned, Lionel Bart – famed for the musical Oliver – had lost his “twang” when he came up with the box office flop “Twang!!”, with two exclamation marks.

But if the audiences of the swinging sixties weren’t ready, the 21st century theatre-goers of London’s Union Theatre – renowned for alternative, low-budget, high-entertainment musicals – are.

Julian Woolford and Richard John have updated Bart’s original, but in fundamental ways, very little has changed since the 1960s, or even since the 1160s when Robin Hood and the extremely merry men, who are the subject of Twang!!, roamed among the trees of Sherwood Forest.

Britain’s beer is still warm and the nation is still famous for Morris dancing and a ruling class that rules from above while rich and poor alike delight in cross-dressing.

Directed by Bryan Hodgson, a young, wildly exuberant cast takes the male art of donning blond wigs and silly tights to new heights of the ludicrous.

First it has to warm up any members of the audience who are not quite sure what they’re in for.

They are accompanied on their emotional journey by Joe Rose as a non-plussed Much, who blunders into Sherwood Forest as yet unaware that the best way to live life is as a musical and that the correct response to why anyone should burst into song at any particular moment is not why, but why not.

Much initially is the polar opposite of Kane Verball as Will Scarlett, a character perfectly adapted to life on the boards. But Verball’s charisma admits no room for detractors and by the end, Much is in danger of stealing the show.

He has competition, however, as not a single character gives any less than their all.

Lewis McBean is dry and derisive as the evil Prince John, in contrast to the reluctant camp villainy of the Sheriff of Nottingham (Christopher Hewitt).

Jessica Brady’s lavish Delphina is a true sport as Much’s tart-with-a-heart love interest and Kweeva Garvey is a feisty Marian.

The only character who is a little lacking in twang is Robin Hood, played by Peter Noden. That, however, is a function of the plot and no criticism of his performance, which just like that of all the other merry men is deftly choreographed, slickly rehearsed and relished by cast and audience alike.