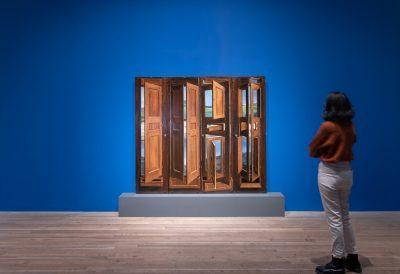 Until August 29 at Tate Modern, London
Exhibition organised by Tate Modern and The Metropolitan Museum of Art, New York.

Surrealism has never respected borders of any kind.

As a movement, it crystallised in 1924 in Paris, and, even then, some artists questioned whether they could belong to something that by definition defied easy categorisation.

The argument in favour of embracing a cause that André Breton’s surrealist manifesto could only attempt to pin down was sharpened by the convulsion of World War and the still recent work of Sigmund Freud on dreams and the subconscious.

A century on, the inadequacy of conventional ways of seeing is again glaringly apparent.  We’re filled with existential angst and if pandemic and war are not constantly on our conscious and subconscious minds, they should be.

“It’s making me think of the images from Ukraine I saw this morning,” I heard one gallery-goer comment.

She was standing in front of Egyptian surrealist Samir Rafi’s 1945 nightmarish Nus (Nudes), which you could read as a laying bare of humanity’s ruthless powers of destruction and upheaval.

It’s possible, she was talking about something else, especially in an exhibition that makes us puzzle over what we’re looking at.  In part, it’s a result of the artists’ intentions, but it’s also because the positioning of some of the labels is one of the more surreal aspects of curation that combines great sweep and intellectual ambition with what seem to be mere oversights.

The overheard comments could equally have pertained to the 1951 work of Erna Rosenstein Ekrany (Screens).  Born in Lviv in 1913, when the now Ukrainian city was part of Poland, Rosenstein witnessed the brutal murder of her parents in a forest in the middle of the night.  Ekrany is her expression of that unbearable pain.  It places screens where there should be heads and the heads are tossed into air that takes the form of a deep blue screen.

The strength of surrealism is its elasticity and tolerance.  It can be a scream with political force, it can be a crazy joke, it can be both at once.

In the more light-hearted category, Salvador Dali’s Lobster Telephone sits waiting to ring near to Dorothea Tanning’s highly suggestive Pincushion to Serve as a Fetish.

The joy lies in the incongruity, or, to quote 19th-century Montevideo-born poet Isidore Ducasse, as the surrealists did, it’s “as beautiful as the chance encounter of a sewing machine and an umbrella on an operating table”.

For some that’s just odd rather than aesthetically pleasing.

Depending on your viewpoint, the juxtaposition of Belgian René Magritte’s 1938 La Durée poignardée (Time transfixed – or literally, Ongoing time stabbed) and Koga Harue’s 1929 Umi (the Sea) is thought-provoking and highly appropriate or awkward.

Magritte’s unsettling masterpiece depicts a steam engine emerging from a fireplace in an empty room.  Above the mantlepiece is a mirror, which reflects a clock, only one of two candlesticks and not the room.

While Magritte is at the European heart of modern surrealism, Harue was part of a Tokyo branch that gave machines and industry the same prominence as the human subconscious.  Umi brings together a submarine in cross-section with a giant human bather, a shoal of fish and a half- submerged factory.

The exhibition’s big claim is that it traces surrealism’s wide, interconnected impact for the first time, taking us from the early mood of experimentation to its harnessing as a force against racism and colonialism and as an exploration of gender fluidity.

As it leaps from continent to continent and epoch to epoch, U.S.-born jazz poet and surrealist Ted Joans effectively sums up the extraordinary reach.  A prolific traveller, who fled his native America to escape racism and the constraints of national boundaries, Joans’ Long Distance is an extreme example of the surreal exquisite corpse format that asks each contributor to add to a sequence of drawings based on being able to see only the end of the previous image.

Joans began his exquisite corpse in 1976 and it ended in 2005, two years after his death.  It includes the work of 132 invited contributors spread around the world, some illustrious – such as Dorothea Tanning and Allen Ginsberg – and it stretches along nine metres of the kind of perforated paper used by the dot matrix printers that preceded laser and ink jet printing.

We’re also treated to Joans’ Bird Lives in which he seems to effortlessly capture the essence of Charlie Parker as part man, part saxophone – although that was reality, as much as sur-reality.

Bird Lives was for me one of many of the happy discoveries among the 150 works on show.  We are also gratified by familiar and yet still disturbing and exuberant classics of surrealism: Leonora Carrington’s self-portrait with a mane of wild hair, a hyena, a tail-less rocking horse, Pablo Picasso’s Les Trois Danseuses and Joan Miro’s Mai 1968.

We end with Wolfgang Paalen’s Le Messager and Pierre Alechinsky‘s Central Park – once again a juxtaposition that disorientates as Paalen’s 1941 experiment in the automatic technique of fumage (painting with smoke from a lighted candle into wet paint) could easily be contemporary with Alechinsky’s 1965 work in acrylic and ink.

I’d have more happily concluded this epic journey with a return to one of the first works in the exhibition: Marcel Jean’s three-dimensional Armoire surréaliste (1941) – a magical, liberating blend of the trompe l’oeil, of the real (the keyholes) and of the almost, but not quite possible – that I could happily revisit time and again. 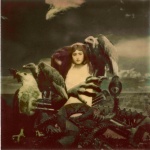 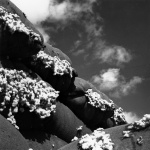