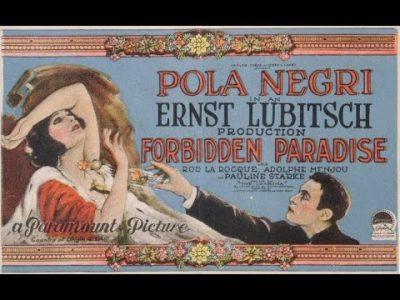 Last Saturday Forbidden Paradise was screened as the final film in this year’s Polish film festival, Kinoteka.  It was at the BFI Southbank and its glowing new print was accompanied with a live score by Martin Pukaluk.  It starred the great Polish film star, Pola Negri.

The plot of Forbidden Paradise is a bit of fluff and the politics are a silly adventure.  Yet its comedic mise – en – scene is wonderful.  It’s executed by Ernst Lubitsch, one of Hollywood’s greatest directors.  Billy Wilder so admired Lubitsch that he had a sign on his office wall that said “How would he have done it?”

I’m sure, as young man, he must have see Forbidden Paradise and loved it.  Of course he then went on to write scripts for Lubitsch.  But Wilder knew he was only providing (brilliantly) the raw material for the famed Lubitsch directorial touch.

“Lubitsch was never blunt, you know – it was never right in your face.  It was something, you know, where you add it up and then it carried you.  Very,very good.  To still have him round would be a very fine thing.” Billy Wilder put it so well.

If Wilder had been able to return from the dead to attend the screening he might just have asked how did they manage to restore it so well?  Colour tinting of silent films can be problematic.  Inappropriate tinting can weaken the dramatic flow and even when it works it still has to be cleaned up so as not to blot out or drench the detail of a scene.  Yet not so with Forbidden Paradise which has some of the best and most subtle tinting I’ve ever encountered.  Some digital recreation of shots was necessary and there are a few continuity glitches but about 90% of the film has been beautifully preserved.

To briefly return to the fluff story that Lubitsch transcended.  A young military officer Alexei (Played by Rod La Rocque, not in the Rudolph Valentino league, but he acquits himself well) rescues Queen Catherine 11 (Pola Negri) from revolutionary members of her army who are plotting against her.  She seduces him and Alexei falls for her.  But unfortunately his first love is Anna (Pauline Starke) a maid at the royal court.  Alexei learns that the queen has been regularly seducing soldiers in her army.  Alexei turns against Catherine.  He joins the rebellion.  But the queen’s cunning chancellor (Adolphe Menjou) intervenes to restore order.

If the politics cannot be taken seriously the comedy can be seriously enjoyed.  Again and again Lubitsch allows his camera to reveal small details that delightfully undermine all the political and amorous behaviour.  This is played out by his direction of actors who are made to appear balletic and spontaneous.

“He made me do simple scenes” complained Marie Prevost, “just coming in and out of rooms fifteen or twenty times.  At first it seemed as though there wasn’t any sense in it all.  Then it began to dawn upon me what the art of acting was all about, and it seemed intolerably and impossibly difficult.  Then I began to see it as he saw it…he deals in subtleties that I never dreamed of before.”

Prevost is talking about her work on Lubitsch’s The Marriage Circle (1924) but it can also be applied to Forbidden Paradise.  He was working with Pola Negri again.  They often argued on set.  But artistically they shone for each other.  She was Hollywood’s great vamp of the 1920’s.  A former dancer who could raise her eyes or simply move a shoulder and deliver those undreamt of subtleties Lubitsch desired to accompany his attention to the pinpointing of objects.

The manner in which Catherine stands on a footstool to kiss Alexei; the chancellor producing his cheque book as a revolutionary’s hand hovers over his sword; those champagne corks fired into a bucket as if they were pellets from a gun and how the queen’s decoration for Alexie turns out not to be special only something she pins on the uniforms of all her sexual conquests.  All is delivered with faultless timing and superb editing: judicious shots that Lubitsch holds for exactly the right length.

Forbidden Paradise is a funny, enchanting comedy of manners from a master.  How did he do it?  We still keep asking that question.