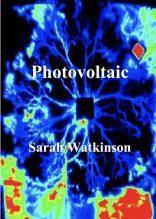 It is so good to witness the emergence of poetry by scientists, especially poetry in which science plays a vital part. With this book, Sarah Watkinson joins the growing number of poets who take science seriously, indeed revel in it.

The trouble with the vague label ‘science’ is that it covers an extremely wide variety of disciplines, and no one poet scientist is likely to satisfy all the areas that can be included in that term. Watkinson’s academic career was as a plant sciences research fellow at Oxford, so most of the scientific references in her poetry allude to that particular discipline. But as well as botany, plenty of animals also make appearances in the book.

Watkinson shares with us her enjoyment of botanical names so, for instance in the poem “Field Study on a Rainy Day”, she writes

Similarly, in “British Mosses and Liverworts”, having suggested that it’s worth learning the Latin terms for plants ‘when it’s wet’, she offers us some botanical examples:

Scientific names clearly appeal to this poet, and as I had to look some of them up, reading this work has filled in some of the gaps in my education a little! Adiabatic, for instance, was a new one to me, but as it’s a term from thermodynamics, perhaps it is not so surprising that I hadn’t come across it before. Fortunately, the poet kindly defines some of the more unusual terms in the Notes at the back of the book; so we read that teosinte is a grass that is probably the wild ancestor of maize. And a medusa, apart from its normal meaning, is the adult sexual phase in the life cycle of jellyfish. Who knows when that piece of information might come in useful?!

While I was familiar with the word petrichor, I hadn’t come across the alternative term geosmin; and it’s good to know that a paper was published by Dacke et al in 2013, that proves that dung beetles use the Milky Way for orientation. So yes, scientific vocabulary plays a substantial part in what makes Photovoltaic an example of scientific poetry.

But of course what matters is not just the scientific vocabulary or subject matter, but the quality of the poetry, and the reader will not be disappointed here. “Spring Equinox”, for instance, is a shining example of achieving poetic beauty in few lines:

Having admired the economy of this example, however, I am not sure that an ultra-short poem such as “Naomi to Ruth” would not have benefitted from being developed a little more.

The first poem in the book, “Darwin in the Galapagos”, is a wonderful introduction to the subject and to the book – a bright example both of scientific observation and of accomplished poetry.

Other examples of Watkinsons’ powers of observation include “Seeing hares”, “Oxford Canal” and “Off Seahouses”. This latter poem is about dolphins seen off the north-east coast of England – ‘They come / as if from a mediaeval navigator’s map / slicing the hilly waves’.

Moving on to the poetry itself, Watkinson is clearly comfortable with various forms including haiku, villanelles and cinquain as well as free verse and regular rhyme and rhythm, as in “Sacrificial Mortar”

I was not quite as sure about the prose poem, “Norham Castle, Sunrise”, where the poet’s play with words in different languages makes for a rather dense example of the form, though I do understand the joy she finds in wordplay. More successful, in my opinion, is “The First Green Human: The Observer Interviews Clorinda”, which is also playful. And this playfulness is sometimes used to a more serious end, as in “A Paradigm Shift in Ornithology” where she contrasts ageing birds with humans:

There is warning as well as playfulness in Photovoltaic. For example, in “Have I Spoiled the Birds”, the poet warns against an uncritical anthropomorphism in relation to non-human creatures. And the dire warning in “Neonicotinoids” is one that should be taken very seriously in our fragile, threatened world before it is too late:

In conclusion, this collection is a refreshing attempt to bring scientific understanding and perception into the arena of poetry. There is more work to be done in this area, and the non-scientists among us may have to catch up with some of the lesser-known terms in order to fully appreciate the beauty of the poetry. Such a minor challenge will be well worth the effort.