The Norwich School of Painting at Norwich Castle.

Founded in 1803 by John Crome (1768-1821) and Robert Ladbrooke (1768-1842), the Norwich Society of Artists, later joined by John Sell Cotman (1782-1842) was the first English artistic movement outside London.  Of far greater than merely regional influence, it can be credited with establishing the views of unassuming countryside and windmills we associate with the Norfolk landscape and with extending its influence over generations as the founders had children and pupils who carried on the tradition.

Much of the resulting work was bought by the Colman family (as in the mustard) and bequeathed to Norwich, where it hangs in the Castle Museum and Art Gallery, currently undergoing a £13.5 million renovation that promises to restore the Keep’s original Norman layout, from the basement to the battlements.

In the interim, the experience is haphazard, especially for visitors who have missed a summer exhibition dedicated to revealing why Crome deserves more renown than he has and overcoming the confusion caused as pupils copied his work and he failed to sign it.

Visitors must also navigate weddings, which during the renovations are being held in the room where some of Crome’s work hangs, together with John Opie’s famous depiction of him as a young man, with rich, dark hair, looking purposefully out of the frame.

You can nevertheless enjoy a non-curated experience of discovering there was more to the first half of the 19th-century than Turner and Constable.

Crome, the son of a journeyman weaver, focused his attention on ordinary life and provides an antidote to Gainsborough’s pompous aristocrats, represented in the Castle collection by a portrait of Sir Harbord Harbord, who, we’re told, was in his private life “a kind of rustic despot” regarded by his tenants as “tyrannic and lofty”.

For Crome, the Dutch masters, especially the golden age landscape artist Meindert Hobbema, were a major influence.  Reputedly, his death-bed words were: “Oh Hobbema, my dear Hobbema, how I have loved you.”

Norfolk had many connections with the Netherlands.  The places shared ties of trade, as well as flat landscapes, big skies and ever-present water, sometimes in the form of a stormy, life-threatening sea and sometimes a tranquil river, as in Crome’s Norwich River: Afternoon. 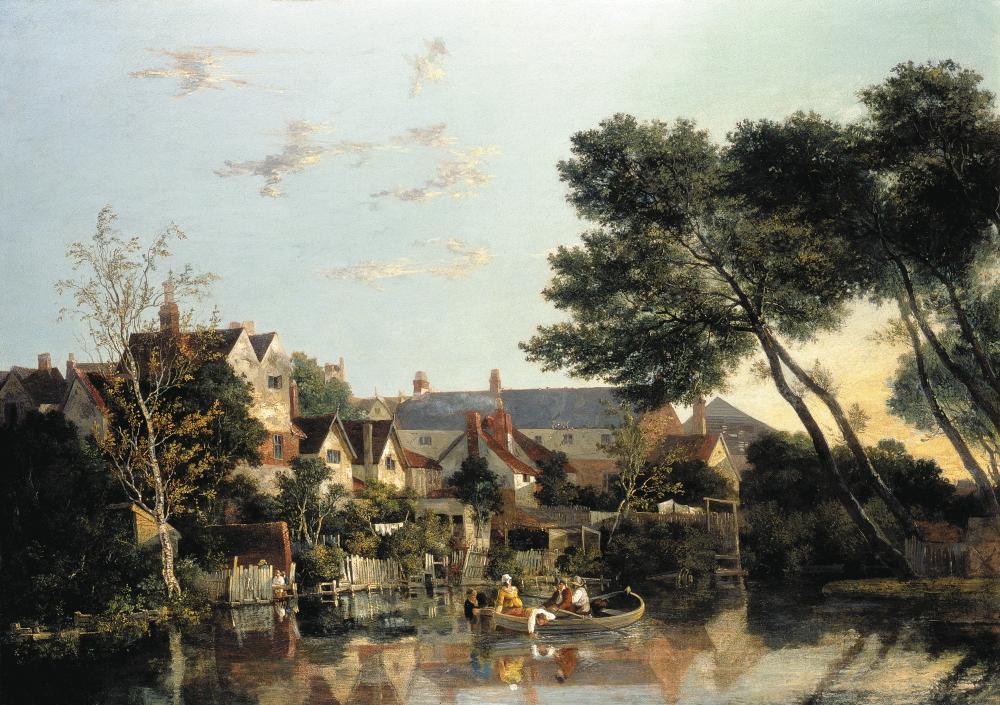 Considered one of his best works, it depicts the still waters of the River Wensum, with the only movement, the ripples around a rowing boat and smoke from the chimneys of houses, reflected in the glassy river, along with their uneven fencing and lines of washing.

Crome similarly elevates what could be ordinary details in the works painted on a rare trip away from Norfolk to the Netherlands and on to France in 1814 after the abdication of Napoleon.

Bruges River, Ostend in the Distance – replaces afternoon serenity with moonlit calm.  Trees, rather than people, are the main presence, and this time the rowing boats are empty. 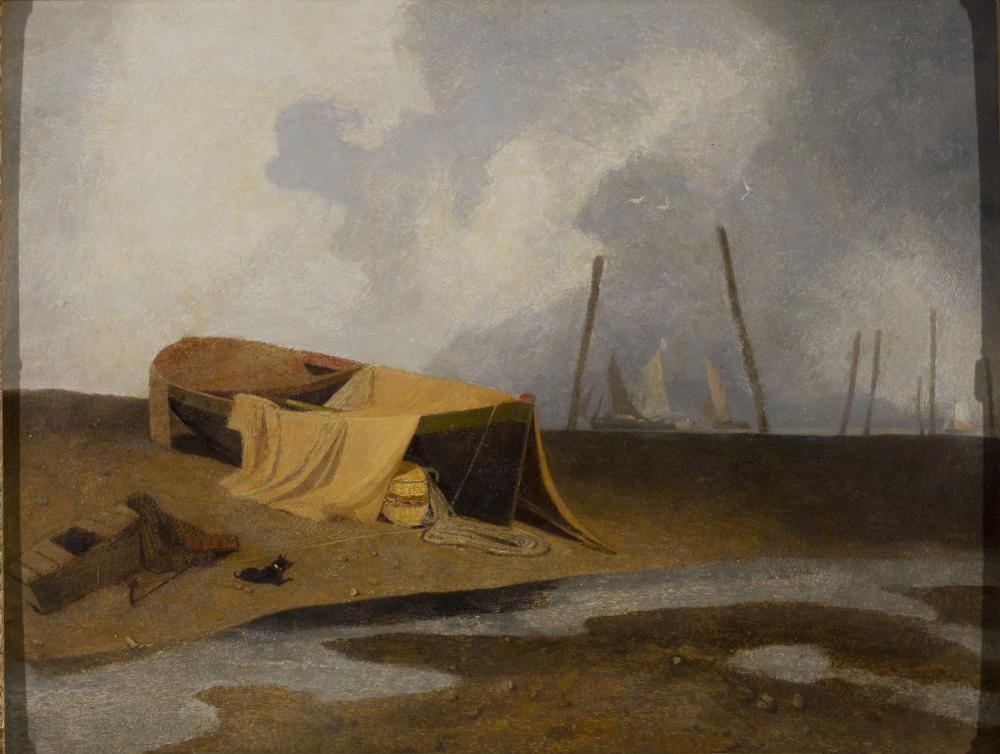 Other records of his travels are The Fish Market, Boulogne, where people jostle for a share of the catch and Boulevard des Italiens, Paris, made rustic by Crome’s trademark depiction of trees, worthy of his beloved Hobbema.

John Sell Cotman, who joined the Norwich Society’s exhibition in 1807, was the group’s other major figure.  He is known especially for his watercolours, which have been locked away because the Colman (as opposed to Cotman) Watercolour Gallery is too narrow for social distancing.  It should reopen soon.

For now, his oils are on display and give a hint of the differences in mood and atmosphere from Crome.  Cotman is said to have been a depressive and, to an extent, Crome’s rival.  His works lean more towards the abstract, unpeopled and melancholy. 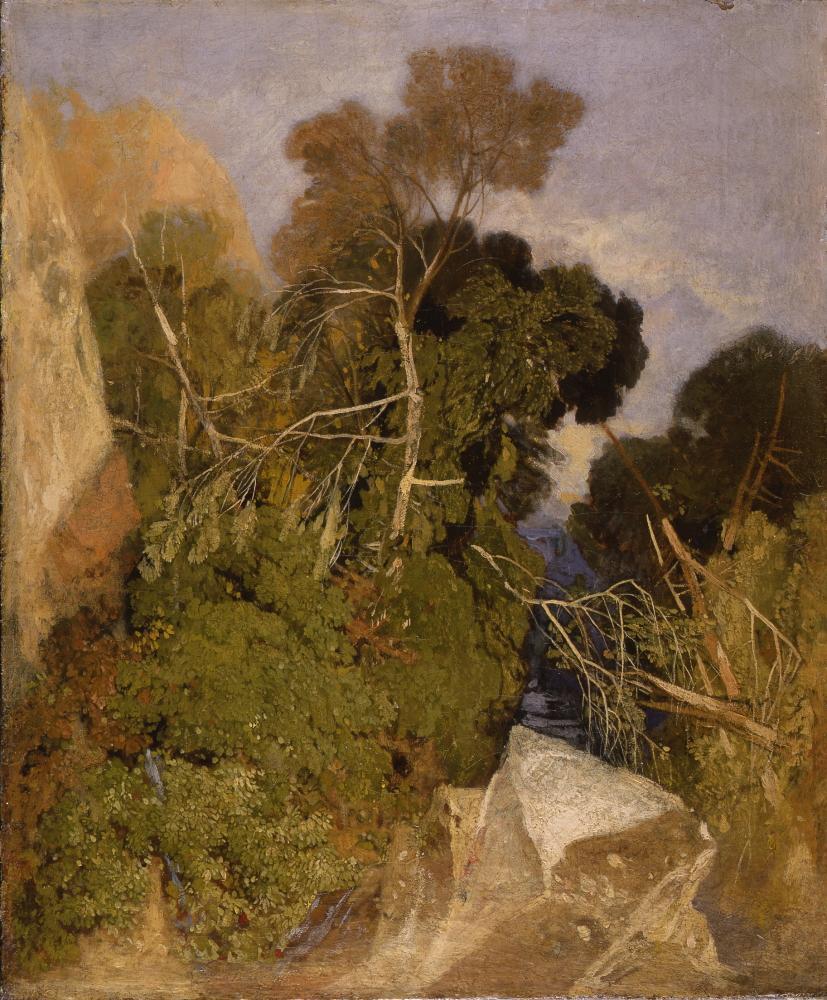 His Silver Birches rise out of harsh rock and leafless, dead limbs contrast the foliage.  Old Houses at Gorleston focus on the timbers showing through broken plaster, while his The Baggage Wagon suggests a lonely traveller making their way along a precipitous route.

Beyond the Norwich Society, the Castle Museum also has a fine Dutch collection, including the Tower of Babel by Tobias Verhaecht (1561-1631), which still strikes a chord for those feeling gloomy about the state of contemporary decadence.  The Paston Treasure, meanwhile, is a rare record of a cabinet of treasures commissioned by the Paston family of Norfolk in the early 1670s.  Painted by an unknown Dutch artist, it depicts an eclectic collection full of intriguing juxtapositions – not so dissimilar from the experience of visiting Norwich’s extraordinary Norman Keep.