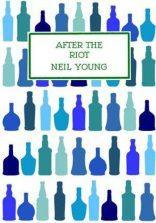 Neil Young is based in Scotland now, but grew up in Belfast in a working-class Unionist community during the Troubles. His childhood environment was ‘Orangedom’. His mother had brought her Dickens novels from England, and the women he knew tried hard to stitch ‘a beauty from existence’. But the men were obsessed by ‘the land’s fierce history’, remembered their fighting ancestors and they sometimes got into fights themselves, against their neighbours. The title poem indicates that Young has come closer than most Brits to violence and tribalism. As a child he knew that something bad had been going on but he was not supposed to know too much.

‘Brewing Up’ suggests the awful poverty of what boys from his background could expect (reminiscent of a scene in the film ‘Kes’):

He got out. This way of life is almost history:

But Young’s past has left him with a deep hatred of those who glamourise war. The sons of Ulster on the Somme, the Haig Fund, the Falklands, Iraq, are all contemplated with horror. ‘The Rewrite’ is a Sassoon-like poem in which the mangled bodies of dead soldiers disrupt a Remembrance Day ceremony with ‘a personal show’. ‘To the Lit-Fest Organisers of an Event by Alastair Campbell’ is particularly scathing, making the point that we flatter and celebrate the wrong people.

And by contrast, why don’t we celebrate the right people? In ‘Rise and Fall’ he turns his attention to statues, so often knocked down or vandalised in our time:

Young would prefer to see the commemoration and celebration of poets, the Unknown Miner, two great Marys (Shelley and Wolstenholme) and two great Rosas (Parks as well as Luxembourg). In this very personal collection he also remembers his birth family with love and nostalgia, and the book is dedicated to his hard-working unpretentious parents. This is an angry, but nevertheless very moving, slim volume.