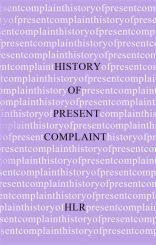 As far as I can remember, HLR’s History of Present Complaint is the first book I’ve reviewed that comes with a content warning, due to its ‘explicit’ references to mental illness and all its consequences. The book documents the history of a young woman’s tortured experiences of breakdown from age 16 onwards as a way of understanding and perhaps dealing with a ‘present complaint’ or trauma.

Through a mixture of documentary prose and verse, we witness an individual in need of help but in receipt of systemic abuse and cruelty at the hands of the police, hospital security and medical personnel. At the books core is an episode that opens the book:

As a result of calling the police to the incident, the narrator is subjected to violent detention against her will and with no legal basis. The text returns to this incident woven through other episodes of trauma.

It’s tempting to ask what happened really, but that’s the wrong question, I think. What this book does is to underscore the fact that for the person in mental breakdown the lines between objective and subjective reality are entirely blurred; what they experience is real, utterly real; to quote a later episode “it’s all real to you”.

Interestingly, this is not a single narrative of mental illness, although all the other narratives are drawn into that central vortex. The death of the narrator’s father and the bitter ending of a relationship with a man who is the only one to show any real care for her become key elements in her distrust of all men, a distrust justified by her treatment. This is hammered home by some of the casual sexism of those charged with a duty of professional care recorded in a section titled ‘Out of The Mouths of Doctors’:

No wonder her constant instinct is to escape from “care” or to lie her way out. And when she is discharged into the care of the community, the reality that emerges is that she has no community, no supports and nowhere to turn. It’s not just the professionals that fail in their duty, it’s society as a whole.

In the end, there is hope of a kind:

In truth, HLR has a good deal more than that, primarily an ability to capture visceral experience in language that enacts as it describes.

This is truth, but it is truth made into art. It’s a book you won’t forget in a hurry.

EVERY SEVENTH WAVE The Norwich School of Painting at Norwich Castle. Review by Barbara Lewis.