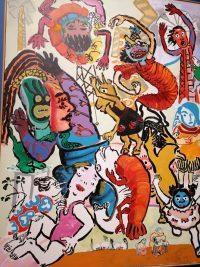 The retrospective comprehensive exhibition of Paula Rego’s work spans sixty years of her career and shows her multimedia approach as well as her multi-faceted view and political commitment.  She was born in 1935 under Salazar’s dictatorial regime, which lasted until 1974 and ended with the Carnation Revolution, a non-violent military coup.  Rego’s liberal and Anglophile parents sent her to London to study at the Slade School of Fine Art, where she won the first prize in the Summer Composition Competition in 1954 with ‘Under the Milk Wood’, which was inspired by a scene from Dylan Thomas’s radio play.  Rego was rightly proud of this achievement.  It recognised her skills as a painter from the early stage of her career, in terms of how she used the media and the theme she chose.  The scene she depicts highlights the emotional interaction between the characters and the importance of relationships.  She went on to develop such topics throughout her career, especially those related to the criticism of Salazar’s oppressive regime and to the condition of women and children in a repressive society.  In her paintings she often exposes persecutions, torture and abuse suffered by women and poor people due to social and political oppression and exploitation.  In the first room of the exhibition, the painting ‘Salazar Vomiting the Homeland’ (1960) criticises in a provocative way the dictatorship that regularly inflicted torture and imprisonment on dissidents.  The woman in the painting is depicted with a huge hairy vagina, pointing to the artist’s belief that women’s response to the repression was the liberation of their sexual desires.

The exhibition is divided among eleven rooms that trace Rego’s career chronologically, and it thoroughly explains the different techniques and themes she explored and developed.  Each room focuses on a topic and on the pictorial techniques the artist used in that period, starting from her experience at the Slade, where she experimented with collage in the 1960s and 1970s.  In the 1980s she started a psychological journey, revisiting her childhood memories from a Jungian perspective in bold acrylic paintings in which animals have human characteristics.  The exhibition also displays illustrations of nursery rhymes as well as the magnificent large pastel pictures from the 1990s that address the abusive social constraints imposed on women.  The artist’s ongoing commitment to speaking out against injustices is also highlighted in her final works, which expose female genital mutilation and the trafficking of women.

In her compelling career that affirmed her reputation as one of the most revealing and innovative contemporary painters, Rego used different media in a skilful, inventive way, developing all the potentials of the chosen technique, from oil to acrylics, watercolours, soft pastels, ink, etching and aquatint.  Her work is usually done on a large scale, and she sets out her narratives in bold and defying yet precise strokes and bright colours.  Her paintings tell us a story in dramatic ways, such as the story of Julieta, who witnesses the death of her husband, a technician who died after being electrocuted.  His contorted body expresses pain and symbolises the exploitation undergone by the working class.  Some of her works are composed in fragments, such as the ‘Vivian Girls’ series, inspired by the story of enslaved children who rebelled against their taskmasters, and the paintings influenced by operas such as Aida and Rigoletto by Giuseppe Verdi, whose images work like a film or a storyboard.  Rego said that she was often inspired by cartoons, films and folktales in her work, as well as by the exploration of her unconscious side.  Her characters are sometimes represented as animals, revealing a dark side of humanity and highlighting sexual desire and the potential to be aggressive.

Large paintings can represent a particular scene, as in ‘The Maids’ (1987), in which two maids murder their employer and her daughter, and ‘The Family’ (1987), in which the women dress the father.  Her famous painting ‘The Dance’ (1988), painted while Rego’s husband, Victor Willing, was dying of multiple sclerosis, represents different relationships the artist is engaged with.  In the painting, Willing is dancing with Rego but also with another woman.  Three characters, a mother, a grandmother and a young girl are dancing hand in hand in a circle on the right-hand side of the picture, symbolising the bond between and the legacy of women.  On the left-hand side of the painting, a woman dances alone, probably Rego, emphasising the artist’s independence and solitude.

Some of the large paintings focus on single characters, such as ‘The Policeman’s Daughter’ (1987), who is polishing her father’s boot, ‘The Cadet and his Sister’ (1988), in which the girl is tying her brother’s shoelaces, and ‘The Soldier’s Daughter’ (1987), in which the girl is plucking the feathers of a goose.  The paintings have a background that gives a deep perspective that reveals a wide view, but the pieces actually concentrate on the single life-size figures, exposing the constrained domesticity women are subjugated to.  The limited and caged condition is imposed by societal rules and causes anxiety, frustration and anger, which are revealed in the stark expressions of the protagonists.  In other disturbing portraits of girls, similar sentiments of anger and revenge linger, such as in ‘The Little Murderess’ (1987) and ‘Snare’ (1987).

Woman’s condition is especially revealed and depicted, and in a masterly way, in the pastel portraits and compositions, where complex feelings such as sexual desire, emotional dependency and self-empowerment mingle; they are compelling depictions of contradictory personalities that struggle to find fulfilment and recognition.  The marvellous use of soft pastels on paper with an aluminium backing reveals a multi-layered technique that builds up the figures in different steps and ends in fierce final marks that leave a wound of sorts on the surface.  Rego’s pastel works are probably the most fascinating pieces on display; the masterly and innovative use of the technique and the exploration of the themes show maturity and a deep awareness of what she was doing.  The use of the whites and greys, for example, in ‘Bride’ (1994) and ‘Girdle’ (1995), have no equal in the oil and acrylic paintings.  The exposure of abuse and primal needs in ‘Bad Dog’ (1994), ‘Dog Woman’ (1994) and the untitled series referring to the aftermath of abortion confirm the artist’s commitment to protesting about injustices and to exposing abuses against women.  Abortion was only legalised in Portugal in 2007 after a failed attempt in 1998.  Rego’s pictures contributed to the pro-choice campaign, confirming her ongoing political commitment.

Differently from her oil and acrylic paintings, the pastel works don’t give a precise idea of their effectiveness in reproductions such as photos or printings.  They need to be seen in real life, where the viewer can appreciate how the multi-layered use of pastels constructs the character and communicates the message in an artistic wholeness that Rego used as a political tool to propose changes in society.  Her women are both weak in their doomed condition and strong in their endurance.  She does not use irony or caricature in these pictures, as she sometimes does in other paintings, but a direct approach that witnesses and exposes abuse of power and various cruelties.

As we walk towards the end of the exhibition, we wonder how we can bear so many injustices that are suffered by the most vulnerable subjects in our society that Rego identifies as women, children, refugees and the poor.  The final rooms reiterate these concepts and end with ‘Escape’ (2009), which depicts a woman who is a refugee and her children fleeing from some calamity.  This is a hopeful message that suggests a more equal society where injustices would be addressed.  This thought-provoking, enthralling and unsettling exhibition widely and thoroughly explores and represents Rego’s work, revealing her highly skilful use of different techniques that she developed throughout her career.  She can be considered one of the major artists of our time who used her artistic talent to relentlessly fight injustices in our sometimes repressive and often limiting society.