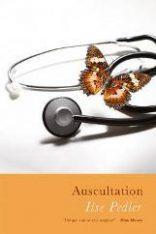 To read Ilse Pedler’s collection is to be fully awoken to the concept of our ‘stewardship’ of the Earth. This means to hear and touch and smell the creatures over which we hold dominion and to rasp, for the moment of a poem, the full extent of our ignorance, arrogance and brutality – and indeed our real responsibility. To feel in our hands the cool probe, the blade, while through our mind there is a flash of steely resistance to our intimate animal self. This is something the pet-owner may cloak in sentiment, but which, for the veterinary surgeon, is considered a necessity, a learned skill. Pedler refuses to acquire it, expressing in her poetry the vulnerability of her position with all the tenderness and control required of her profession.

‘The consulting room,’ she writes in a recent blog post, ‘is a privileged place and the role of veterinary surgeon can feel like a balance between healer, confessor and counsellor’. And of a practitioner of euthanasia… ‘These are the animals that wake you in the dark hours and make you question what you do’. Stating the fact that hers has the highest suicide rate of any profession, she quietly adds that ‘this is explored in a few of the poems’. Just how powerfully and viscerally is demonstrated in the second poem of her collection, “Teach Me to Kill”:

And so to “Every Time a Performance”, in which ‘We emerge – stage left – like ghosts/in our pale green gowns/bowed at the back’ and ‘transactions occur,/blood beads urgently/from the lines we draw’.

There follow reveries on surgical instruments, lined up for ‘solving the problems/of the soft persistence of tissue’. And we get a gently wry commentary on differing approaches to the job. In “Miss Freak’s Whelping Forceps”, whose delicacy, slim shanks and ‘small angled loops to cup the head and ease it through, lie displayed ‘wrapped in cloth in a Gladstone bag/boiled in second best saucepans’ on velvet in the museum vitrine’. They sit alongside far more robust tools used for the same task:

The birthing of beasts is rendered graphically and poetically in “The Calving”, where vet and cow ‘both strain to birth/this new life – and only she/and I are warm,/and I am at the warmth’s core.’ In this poem, and also in “Neighbours”, what comes across is the deep respect with which the poet regards this recurring miracle, and her anguish at the travesty of treatment often involved in livestock breeding. Agonising too is the conveyor-belt that brings our bacon to the table; crate after metal crate of doomed creatures, intelligence and sensibility denied, stripped of any modicum of dignity or comfort…‘Piglets deprived of teats scatter,/duck into the creep and safety of the lamp’.

“The Importance of Air” begins with early evening sun on pastureland as the herd is ushered to the milking parlour. Here ear tags are checked, each cow

The cow ‘breathes in calf all night long’, until

(This is so unrelenting a depiction of modernity that the mind flees for consolation to the personal history of dairy farming documented by Janet Sutherland in her recent collection, Home Farm (Shearsman Books, 2019), an exquisite memorialising of a not-so-distant landscape studded with water meadows where she called the herd home by name through drifts of wild flowers, and once, ethereally, when only their heads were visible above the mist.)

Pedler reminds us of creaturely innocence, and tenderness, again and again. She tells us that the sow sings her sucklings a lullaby (“Grunting Up”); and that the testicles of ‘sweet-breathed calves’… ‘silver glazed/pulsating with the last of their lives’, end up in a bucket, a treat for the workhouse collies, last morsels chucked to the chickens. How faithfully, how humbly they serve us; how neglectful we of the debt owed.

The first formal experiment comes with “Ploughing”, in which the word ‘turn’ closes each line of a two-paragraph prose poem describing the ploughman’s art retrospectively. The poem glances back from today’s precision farming using GPS-driven tractor to a time when

This repetitive, meditative poem ‘turns’ finally and inevitably from consideration of ‘the importance of other things’ towards the ploughman’s ultimate goal of ‘the Earth’s rim’; the inflection of loss and desolation perfectly judged.

Reflections on human parenting, childhood, pain, sickness and lost life form a fulcrum for the collection, where at a hospital bedside members of a waiting family ‘let our eyes drift from the window to our cups of tea’ while somewhere else a magpie reconnoitres a blackbird’s nest, seizes a fledgling as the parent birds with a ‘frenzy of raucous screaming in dive after dive batter the thief with their wings…small fists beating against your chest’.

The title of the eponymous poem, “Auscultation”, means listening and the poem depicts the origins of sounds and how they reach the ear, both naked and through a stethoscope. Externally generated noise mutates into those subtle waves emitted by the body from its inner truth and are again translated out towards the world… ‘murmur/it/ whisper/it /butterfly/ butterfly/butter/fly/ but’. The tempo, volume and frequency of sounds is evoked by syncopated, rhythmic, often broken or echoing lines.

In “All this accumulation of knowledge” Pedler casts a jaded eye over the totality of her expertise: ‘how to duck under barbed wire without breaking stride’… ‘where to find the sweet spot behind an old boar’s ear/and by scratching it – bring him to his knees’…

In “Roadblock” the unspoken grief of the job finds release in curt couplets. Pedler is called to a wounded horse, whose leg ‘is like a child’s drawing/bones angled all the wrong way’ and, not having with her the required implement, she rushes back to the surgery to fetch it then makes a hurtled return through the roadblock

Others to join the ghost creatures preserved in a “Cabinet of Curiosities” are the spectral rescued owl that arrived in a cardboard box, and a migratory wood snipe blown off course into ‘a grey town’. Other spectres arise out of the poet’s own childhood and that of her children and stepson and from the roles of motherhood and step-motherhood themselves. In “Mothering” a ewe is tricked into accepting an orphan lamb by rubbing it with the real mother’s glair, ‘The best way to acceptance is disguise’, but the villanelle ends up asking ‘can this conceive the love that ties?’ This is an excursion into formal technique that works better here than in the earlier “Behind City Doors”, where the pantoum seems forced and contrived.

The collection’s closing section, Fairy Tales and Step Monsters recalls separation from a much-loved child while custody is contested through the courts – an experience rendered as a fairytale as though transmission into myth might serve to soften the agony. But no disguise can work here either. No wish persuades the judge to use ‘words that would snip like scissors on her tongue,’…’and the silence would break her spell’. No salve for the impotence of the one so very close but yet not next-of-kin:

Nor is there relief for “The Father in the Weeks Between Seeing his Son”: ‘I feel the place in my chest/that you flew to when you were born,/that each day you hollow into a deeper hollow…’

We’re told that the brothers Grimm faced such an outcry for making mothers the evil figure in their stories that they invented the stepmother, but

Such compassion, courage and conciliation are the hallmarks of this lovely, unaffected and affecting first collection.