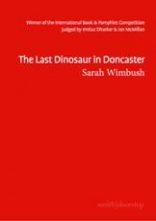 The cover of this nicely-produced Smith|Doorstop pamphlet is fire-engine red – certainly attractive, with its white title and faded orange author bio, but also a useful guide to the political hue, and cultural impact, of the twenty five poems inside.

Though she starts small, with a fractured haiku introducing images of radical potential (“One pink match. One black”, ‘Strike’) Wimbush is clearly at home on a larger canvas – looser free verse poems running to a page and a half, two pages, which are evocative, deeply rooted in finely-worked detail and explore the colour and punch of local speech. ‘The Lost’, for instance, charting the unveiling of a restored statue, ranges far and wide around this moment of cultural pride, from

The varying moods, modes of perception and registers are dazzling, but the poet keeps them under tight control, cinching up her amble across the scarred face of the city with an image of complex beauty, invoking passed time, falling on

It is a threnody, yet a work of celebration, too. In similar vein, ‘Our Language’, a great block of a prose poem deliberately hefty with packed lines, sits on the page like a single seam, both mourning and calling back to life the vivid culture of the mine.

Like many of these poems, ‘Our Language’ is angry – “It is not dole-wallahs, nor the never-never, not the light-fingered … It’s friendship. It’s fuck the bastards!” – and tender in the same moment: “This is the language of the pony riders and jumped-up check-weighmen, of Davy lamps and Dudleys, the oncostlads and gaffers, of black-nails and snap-tins, and names like Arthur passed down through time until it’s more than a name”. She visibly works this seam throughout the collection, from the puzzled, dented masculinity of men queueing up outside the M&S lingerie department as their wives attend to the mysteries (‘Inside Lingerie’) to the fleeting dazzle of wildlife, burning brightly against the dark valley, which reappears throughout:

As this resonant image attests, landscape is powerful both on the largest and smallest scales, and Wimbush similarly is not restricted to broad canvasses. At the level of line and phrase she also excels. In ‘The Pencil Sharpener’, for instance, contrasting technology and tradition-based means of sharpening a writing implement produce “a skin-fresh pencil” and “peel a pencil like a pear”; in ‘Ripper’, a worn-out relative whose face still “wondered at every sunrise” crouched by the fire, “grey-jowled; the world/was a sack of nuts on your back”; and proving rage at past political neglect doesn’t preclude a nifty sense of humour, the crabs of ‘Things My Mother taught Me’:

It is another wide-spread social canvas, only for crustaceans.

In almost all the poems within ‘The Last Dinosaur’, we are invited in – to history and vivid cultural tableaux, to the various communities through which the poet moves, to rage and despair and tenderness. No piece, even the ostensibly lighter poems, is without some small freighted meaning along these lines, and is all the better for it. The ex-miners meeting on street corners, for instance, in ‘Markham Main’:

Even in a blasted post-industrial landscape – barren, culturally, as tamped down slagheaps grassed over and called wildlife parks, or here, playgrounds – where decent employment founded in community and deep utility has been ripped apart by Thatcherism, then remade into consumer paradise, the miners remain miners, together.

Overall, the book packs a punch for a slim volume. Its heart, gritty lyricism and commitment to the preservation – and creation – of culture are a winning combination, and presage great things in any full collection to come.