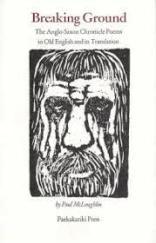 Have you ever stood in an Anglo-Saxon or Viking museum and longed to reach out and feel the weave in your hands or stroke a thumb across one of the coins?

“The Anglo-Saxon Chronicle” is one of the two most important sources (along with Bede) of information about life in England between the Romans and the Norman Conquest. Among its annals and riddles are six poems. In The Word Exchange, a comprehensive, bi-lingual collection of Anglo-Saxon poetry edited by Greg Delanty and Michael Matto (Norton, 2011), Seamus Heaney said in his foreword, ‘Anglo-Saxon poetry isn’t all stoicism and melancholy, isn’t all about battle and exile and a grey dawn breaking’. The Word Exchange often falls open at female voices lamenting the absence of loved ones or expressing anger at infidelity and the like. The poems from the Chronicle stick to the history textbook with four about kings and two about significant battles.

Paul McLoughlin is known for wry, understated poems set in the present. His two earliest publications What Certainty Is Like (Smith/Doorstop, 1998) and What Moves Moves (Shoestring Press, 2004) were followed by further Shoestring collections Forgetting to Come In (2007), The Road to Murreigh (2010) and The Hungarian Who Beat Brazil (2017). He taught at comprehensive schools in London for many years and in semi-retirement developed the Isleworth & Syon Jazz Big Band, proudly joining them in performance at Ronnie Scott’s. His website contains an eloquent memoir about the flaws in his own education, starting with the moment when, at the end of his fifth year of secondary, he walked ‘diagonally across the playground … with nothing concrete to show for having been at the school’. One member of staff commented to McLoughlin, who was on his way to sit an O-level exam, ‘The only thing you’ll ever pass, boy, is water’. Perhaps somewhere in the preparation of this beautifully produced, scholarly volume is a glance at that teacher.

Breaking Ground is exquisite to hold, with its cream dustjacket, scarlet cover and fine woodcuts by Alan Dixon. In the spirit of William Morris who set up the Kelmscott press in 1891, Paekakariki Press began in 2010 (in Walthamstow where Morris was born) ‘to continue the tradition of letterpress printing that is in danger of disappearing in the digital age’. Their website is a feast for engineers with pictures of wheels and cogs in their mighty machines with names like the Furnival 20” Guillotine, and the Heidelberg KS Cylinder which apparently emits a ‘soft breathing sound’ when in action.

McLoughlin offers an almost self-effacing explanation of how he, a non-Royalist, unreligious person, and not an Anglo-Saxon scholar, came to translate the six Chronicle poems. It was simply that he was invited to contribute to The Word Exchange project and (complimenting Robert Hass’s versions of the poems there as ‘very fine’) felt drawn to completing the set himself.

Translation can be a tricky art. Most poetry translators go for versions rather than strict accuracy and it is some time since translators have tried to emulate the Anglo-Saxon taste for alliteration. Most do hold to the meter though, with two beats in each separated half-line, Heaney’s Beowulf being the most masterful recent example. McLoughlin’s versions bring an elegant combination of rhythm, easy flow and a musician’s phrasing.

The best known of the poems is probably “The Battle of Brunanburh”, possibly because Lord Tennyson and Borges both had a crack at it. It is a panegyric in the warrior tradition about the 937 battle when brothers Aethelstan and Edmund (grandsons of Alfred the Great) combined to defeat an army of Scots, Vikings and Britons and unite England for the first time under the House of Wessex.

McLoughlin’s skill lies in building emotional momentum while staying close to the text:

“The Death of Edgar” commemorates the life and death of King Edgar ‘the Peaceful’ in 975. His reign from 959 until his death had been remarkably stable, something the poem credits to his close relationship with the Christian Church, in particular with Archbishop Dunstan who crowned Edgar in the first ceremony of its kind, elements of which survive in British coronations today.

McLoughlin has revised his version in The Word Exchange in both layout and text. In Breaking Ground most of the poems have each half-line standing as one while The Word Exchange presented “The Death of Edgar” in four-line stanzas of full, four-beat lines. So, here is the 2011 version:

But in the present book this becomes:

It has been argued (Jost, 1923) that “The Death of Edgar” is not poetry at all but alliterative prose, probably composed by Archbishop Wulfstan to convince Christian believers that good relations between Church and State are what bring God’s peace. But it undoubtedly becomes poetry in McLoughlin’s hands:

Similarly, in “The Death of Edward 1065”, McLoughlin is not afraid to go for the emotional sense of a section, while preserving the rhythm and phrasing. This poem celebrates Edward the Confessor’s reign of ‘twenty-four/ and one-half winters’. Edward is praised for surviving years of ‘exile widely/ across the earth’:

That use of ‘leaching’ is clever, contrasting with Edward ‘distributing wealth’, with lovely repetition around it of the ‘ea’ vowel.

McLoughlin does play with the text. “The Death of Alfred” mourns poor ‘innocent’ Prince Alfred in 1036. Alfred, only 30 or so when he died, and one of Aethelred’s eight sons, had tried to reclaim the throne after Canute’s death but, betrayed by Earl Godwin, he was blinded and killed. The conventional interpretation has Alfred blinded at the moment their ship landed. McLoughlin increases urgency by altering the timeline:

Another ploy gives us the book’s title. “The Battle of Brunanburh” closes with praise of the Wessex warriors’ love of blood – ‘Never before/ had there been greater/ slaughter on this island’ – and likens them to those who defeated the Welsh and took their land. In the final lines of McLoughlin’s version he writes:

Not only did these battles break new ground politically as well as literally but McLoughlin himself is moving to new poetic ground where he thrives. Congratulations, McLoughlin and Paekakariki Press, for taking us among the crowns, spears and linden-shields, and for honouring the heart of these ancient poems with such sensitivity and grace.

Rosie Johnston’s four poetry books, published by Lapwing Publications in Belfast, are Sweet Seventeens (2010), Orion (2012), Bittersweet Seventeens (2014) and Six-Count Jive (2019). Her poems have appeared or featured in Hedgerow, London Grip, Culture NI, FourxFour, The Honest Ulsterman, Ink, Sweat & Tears, Mary Evans Picture Library’s Poems and Pictures blog, Words for the Wild, From The Edge magazine and in Live Canon’s anthologies ‘154: In Response to Shakespeare’s Sonnets’ (2016) & ‘New Poems for Christmas’ (2018). She has read her poetry widely, including Hungerford Literary Festival, Watford’s Big Word festival, Winchester’s Loose Muse, the Poetry Cafe in Covent Garden, the Troubadour, Torriano, Margate’s Pie Factory, In-Words in Greenwich and Whitstable’s Harbour Books. Rosie was poet in residence for the Cambridgeshire Wildlife Trust until she moved to live by the sea in Kent. www.rosiejohnstonwrites.com