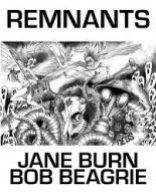 This collection takes the reader on an exhilarating and exciting journey with two talented poets. It is the second collaboration between Beagrie and Burn, who clearly inspire each other, in which they pick up threads and themes to run with in surprising directions. In a recent interview, Bob Beagrie described Remnants as: ‘a futuristic sequence of post-apocalyptic dream visions based on the notion of a small tribal community struggling to survive after the next Great Flood.’ The result is an ambitious and often unsettling collection. It is also a little exhausting.

Part of my exhaustion came from constantly adjusting to the context of each of the sixty-four poems. Myths, folklore and different religions are interwoven in the narrative, giving the poetry depth and resonance but also adding to a feeling of disorientation. Perhaps this is deliberate. After all, the Old Order has been destroyed and the New World is uncertain – sometimes threatening and dark, sometimes full of hope. Humans are ‘children of the Flood’, mere ‘surf-scum and flotsam’; their modern world of superficial gadgets and materialism is gone forever. Time and gravity are fluid concepts, enabling each poet to explore liminal states in poems such as ‘Foraging the Weightless’ and ‘Omen’. The numerous Irish, Norse, Buddhist and Greek mythological figures that appear will be unfamiliar to many readers. You can simply feel yourself marinaded in the rich vocabulary and enjoy the overall mood of each poem, but it might enhance appreciation of the text to understand the cultural references.

The language is wonderful, varied and inventive. It sounds even better spoken out loud in order to savour the shape of the words and to hear the inherent music, particularly that of the North East dialect. For example, the opening poem (and the one that gives the title to the collection) begins:

The survivors must learn the songs and psalms ‘the Olders sang / on board ship throughout thor Great Floating:’. There follows a list of four of the later poems in the collection, all of them songs of creatures with different symbolism: the raven, the boar, the stag and the whale. ‘The Rhapsody of Hrafen’s Skull’ places the bird as the:

It is spine-chilling stuff and the image of the black raven presaging the Deluge ominously reverses the story of the white dove from Noah’s Ark.

Both poets use portmanteau words to convey texture as well as powerful visual images and no-one could fail to recognise ‘snot-slippy’ as a brilliant description of wet rocks exposed at low tide. In a later poem, Burn creates the lovely ‘wonty-tump’, to describe a molehill.

Remnants contains much experimentation with form and rhyme. In ‘The Canticle of the Whale’s Lung’ the shape of the poem is like a lung and the repeated phrases and words, sometimes slightly altered, mimic a whale diving and then resurfacing. ‘The Spring and the Lambs’ is a hopeful poem on the theme of resurrection in which the spacing suggests the text can be digested in a variety of ways:

The words on the right can be read vertically and make sense without their accompanying left-justified companions. The repetition of ‘I am’ in the centre of the page draws attention to the speaker lying underground with moles and worms and finally receiving life-giving rain in the striking image of ‘Angels cry me waterfalls of light –‘.

Other poems, such as ‘Out of the Wood’, combine alternate lines of Old Norse in italics with their translation. The repetition works like an invocation and the use of unfamiliar words adds to the magic and mysticism:

Some poems are more straightforward in their lyricism and form. ‘Searim Seior’ is an evocative song of survival or prayer in which:

Heart-seeds seem to suggest memory, hope, and rebirth all at the same time. The poem ends with this instruction:

Some choices puzzled me. Why were some poems written in a mix of grey and black font? Was there a hidden code? In the two poems ‘Tree Speaks I & II’, lines from a factual source appeared to be interspersed with the voices of the trees involved. Why not reference this source? It would have been helpful to have a glossary at the back of the book to explain the origin and significance of the Gods and mythological beings mentioned to provide cultural context.

The price of the book at £18.00 reflects that fact that this is a large volume in every sense. It contains two poets’ work, visual and written, and its subject matter is huge. It was disappointing to find at least two misspellings of the possessive ‘its’, reproduced as ‘it’s’. But apart from that niggle, this collection deserves reading and re-reading many times to enjoy its dream visions and marvel at the versatility, originality and skill of Beagrie’s and Burn’s writing.