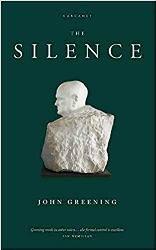 John Greening’s latest collection combines three long poems (in the case of the title poem, “The Silence”, very long) with a selection of shorter ones. All are worthy of comment, but this review will focus predominantly on “The Silence”, because, while all the poetry is good, this one is outstanding. I don’t think I’ve been quite so excited to read a poem since I first discovered Alice Oswald’s Dart, in 2002.

Greening’s extended poem, “The Silence”, which runs to 32 pages, is ostensibly about the last thirty years of Jean Sibelius’s life, in which, though already famous throughout the world, the composer produced no music at all. He was rumoured to be working on an eighth symphony, but this never appeared, and the manuscript of it was quite possibly burned on the fire in his cottage in Finland, where he lived with his wife and family.

I say ‘ostensibly’, because the poem is clearly about far more than Sibelius, fascinating though that subject is in itself. In particular, the poem is about the process of creation, and will inevitably resonate with poets. There will, for instance, be few writers who don’t identify with his dilemma when he writes:

The autobiographical slant is further strengthened when, earlier on that page, we find the lines:

But withering is certainly not something that is affecting this Greening. Daring to write in rhyming quatrains (abba) throughout, he plays with rhythm, half rhyme, internal rhyme and enjambment. In the hands of a lesser poet, it might well not have worked; but Greening rarely puts a foot wrong. Just occasionally the restrictions of the form produce a less successful verse:

The enjambment between the third and fourth lines here is, to say the very least, uncomfortable. But there are few such instances.

There is emotion and pathos in the poem, but also joy, childlike playfulness and a real understanding of music.

Writing an extended poem often gives a poet the necessary space to explore an idea deeply, and to develop a style more fully. I have certainly found this with my own longer poems, which have often turned out to be among my best work; and this is without doubt the case with “The Silence”. Greening’s other long poems in this collection are also successful: “Nehamun’s Tomb”, “Heath”, “From the Peak”, “Chalk” and “Airmail for Chief Seattle”, though the last of these has an enjambment that while some may approve of it, others will find uncomfortable, if not positively ugly:

I couldn’t help wondering whether there was another playful autobiographical hint in the poem “Chalk”, where we read

Is the choice of words here a small bow to his friend and co-poet, Penny Shuttle, with whom he has recently collaborated in the collection, Heath? Greening values other friends and poets in his writing too: his “Evensong” in which he meditates on what happens after death, is in memory of Dennis O’Driscoll; and the epigraph that introduces the whole book is by Seamus Heaney: ‘Silent, beyond silence listened for’.

Among the shorter delights in this collection, I would recommend “Compleat”, in which Greening describes a fishing trip in minute detail, “Woden”, and “Tree Rings”, with its beautiful final lines:

That ‘torquing to itself’ is deliciously cheeky, and absolutely spot on!

This is an intelligent, satisfying collection and, appropriately for poetry where one of the main subjects is a musician, it is consistently musical.