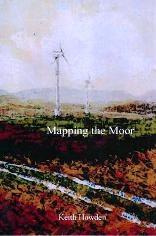 Michael Bartholomew-Biggs tries to keep up with Keith Howden’s poetry as it covers the landscape, the history and the people of the Lancashire Moors

This is a collection largely made up of five quite long sequences. The first of these – which is not quite the longest – gives the book its title and is notable among other things for its particular form of word play which involves recurring variations on more-or-less enigmatic assertions. Thus “Maps draw their makers’ mind” is a face-value persuasive statement; but “A map dances its maker’s mind” is more mysterious, as is “My map stutters its maker’s mind.” Similar progressive repetitions occur throughout: we are told in the opening poem that

after which we learn that the same familial lineage

and then, a couple of pages further on, it is said to have

Some examples of this rhetorical device might strike the reader as being more successful than others; but the overall effect of these broken echoes is rather haunting. But all the same it comes as a welcome contrast when human speech or human emotions break into these more abstract speculations about place and time – as in the unambiguous resentment of “Mercedes / commuters tart mill cottages” or the bleak certainty of ‘I’m not much use at dying /I’ve never done it before.’

Similar linguistic / stylistic elements are to be found in the subsequent, shorter sequence ‘Familiar Landscapes’. But these are accompanies by a new note of unexpected threat as in

‘Team Photographs’ is the major sequence in the collection and it is essentially a domestic drama – in contrast to the foregrounding of landscape and history in the previous poems. It is a story of illness, injury and infidelity told against the background of local football and the local pub. The tale is convoluted and is told – as real stories often are – with a certain amount of repetition and non-sequential introduction of important facts. Landscape fades into the background as we contemplate some of the main male characters in a team photo of a side “that never won anything” and “specialised in relegation.” Significant events in the story are sometimes introduced with shocking brutality as in the casual mention of “the accident / that scraped his wife to leglessness”. Other episodes are semi-revealed in guarded conversations:

Howden has a good ear for the pleasing rhythms of natural dialogue and he gives the reader a realistic sense of eavesdropping on local gossip (disclosure: two of the poems from this powerful sequence have appeared in a recent issue of London Grip New Poetry).

The next group, ‘Seven Lost Chapels’, might have benefited from some background notes to give context; and these poems seemed to lack some of the energy of ‘Team Photographs’. There are some telling lines however such as “She was the moor’s merchantman, / a Flying Dutchman riding at harbour / under the fell” or “Silences / of a pumped harmonium swell / umbilical in her belly’”.

Several individual poems continue the collection in their own gritty way, seeking to tap into ‘ a language for rough land’ – one which embodies itself when it declares that

We are back to story-telling with the final sequences ‘Cracked Mary’s Mill’ and ‘Barley Top’. Cracked Mary sets her own scene in a way that echoes some of the long-remembered family lines that figured at the start of the book

Ideas of heritage and inheritance also run through ‘Barley Top’ which seems to be a kind of ancestral history – although not one that involves special pleading for kinfolk. It begins “I wear them, ranting bastards, / my blood forebears, children / of unforgiving creeds, acid within their moor.”

At the end of all this I must admit to having felt rather overwhelmed by the weight of local history and regional lore and place-names. The poems are certainly powerful and the language is rich; but I could not help feeling that Howden sometimes revisits ideas about the past a little too often. It is when he engages fully with people in the here and now – as in ‘Team Photographs’ – that his poetry seems to be most successful.