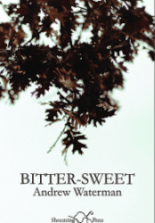 This is a sequence of seven poems, only one of them more than a page, about a long-distance relationship taking place in Norfolk, the Fens, Sicily, Romania (where the partner’s mother is dying), and Florence (where the couple also meet). The poems carry a depth of feeling in short episodes over several years, the occasions being described with a restraint that makes the poet’s personality appear both passionate and buttoned-up. But the sharing of the experience with the other person is a great need, and in the final poem about a full moon in the sky opposite a sunset, he says:

This makes the sharing of experience in poetry into the point of the pamphlet, but it is harder for strangers to respond than it is for the addressee of the poems, because it isn’t our own experience, and we are barely offered the kind of mechanisms of sound and image generally employed in poems to help us feel such magic. Restraint is a powerful tool in itself, and an image like the combined moon and sunset is striking enough on its own to hold the meaning of the two people in their relationship (which isn’t made explicit): but the description falls into cliché – “the western sky a flood of red and gold” – and though a sunset in anybody’s poem will be hard to keep from failure, this happens too often in the sequence. There are in fact very few metaphors in the poems, which is part of the admirable restraint; but too many of the few, and other non-metaphorical descriptive phrases, are clichéd or simply dull, like “snowflakes dancing”, “Etna’s great hulk’’, or Ely Cathedral’s “niches with delicate carvings”, stained glass “vividly lit”, and “kempt Green”. “Swans’ necks like question-marks uncoiling” is a little better, but doesn’t create any new level of meaning for the experience described. This problem makes the plainness of the style much more of a drawback than the advantage it could have been.

There are other things I could say, but my disappointment with the pamphlet will be obvious by now. Andrew Waterman is a poet with a reputation, though I didn’t know his work (he has published eight books with Carcanet) and I was expecting to enjoy this much more than I have.