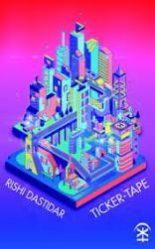 Michael Longley, in his preface to Louis MacNeice’s Selected Poems, suggests that most ‘true poets’ relish ‘making catalogues’. Although we might query the notion of the ‘true’ poet (who exactly is a fake one?), there’s clearly something in this. Rishi Dastidar, like MacNeice, relishes making catalogues; like MacNeice, Dastidar is also fascinated by idioms, clichés and the hidden codes behind them.

There are a huge number of poems in Ticker-tape, and it’s exciting to see a poet throwing shorter pieces, aphorisms and visual puns into a first collection. The poems are marketed as a ‘maximalist take on 21st century living’: facing the digital age, and its effects on language, full on. In this vein, the title piece, ‘Ticker-tape’, is an eight page list of modern metaphors, euphemisms and codes:

The individual images, as well as the way in which images are collated and contrasted, are ingenious: ‘colour trooping’ and ‘monarchtopolis’ suggest a sort of techno-monarchy in central London. But there are over seventy identikit stanzas, and my millennial concentration flagged a little.

The playful, purposeful interrogation of Englishness of the title poem is present throughout the collection. Dastidar is also concerned with the relationship between money and art. In George Orwell’s 1930s novel Keep the Aspidistra Flying Gordon Comstock is a hard-up young-ish poet who hates his job writing copy for a small advertising firm. The job, in Comstock’s mind, is a simulacrum of the superficial society in which he lives, one which worships the ‘money-god’ at the expense of more noble things like poetry.

Ticker-tape, engages with the same problem: how do you make art in a world dominated by money? Largely set in London, the collection swarms with images of ‘love and capitalism’ in the capital, the two forces depicted as both manufactured and manufacturing one other, but ultimately productive of something hopeful.

For instance, in ‘Making a cheese soufflé rise’, a celebrity chef called David Ogilvy appears in a dream to persuade the poet that the job of an advertiser is, in fact, worthwhile:

The conversationalism and humour is characteristic; ‘acts of persuasion’ and ‘a poster campaign for life’ are nice slogans for poetry. There may be some tongue in cheek here: as I understand it, advertising doesn’t sell ‘life’, but particular products to particular groups of people. Still, the sentiment and style make you feel like a scrooge for dissenting.

Many of these poems are lists. Aside from the title poem, subjects ranging from a man on TV, #MyEngland, the metaphor ‘gunmetal’, Premier League footballers, a date and various aspects of digital life are all given similar treatment. This is a bold repurposing of contemporary culture, where lists are ubiquitous, from clickbait to spreadsheets. But cataloguing comes with its own set of ethical problems: I’m not sure making generalisations about footballers, for instance, is a particularly good look for poets.

Technically speaking, meanwhile, lists are a deceptively easy habit to get into, and the incessant drip, drip, drip of the form places an even greater burden on the poet’s other resources to add variety and interest. Ticker-tape reveals the list’s wit and relevance, but also its constraints: it will be interesting to see where Dastidar takes the form in the future.