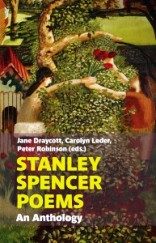 Themed poetry anthologies are not always successful. Sometimes the chosen theme turns out not to lend itself to a sufficient variety of poetic responses; and even when the theme does prove to be a rich one there can often be an unevenness of quality. I am glad to report that the present volume avoids both these pitfalls: since it contains poems inspired by the life and work of the painter Stanley Spencer it draws upon material of almost inexhaustible strangeness and originality; and since it has been compiled from entries to a competition the editors have been able to select the seventy or so contributions from a much larger pool and thus to ensure that the quality is consistently high.

Most of the poets are represented by a single poem; but some make two, or even three, appearances. For the record, Rosie Jackson was the eventual first prize winner in the associated competition; and she has two poems in the book. The runners up were Richard Robbins and Ross Cogan. Jackson’s winning poem is ‘The Heaven that Runs through Everything’ with its detailed observation of “small everyday miracles”; but  her other poem ‘Sewing on a Button’ caught my attention just as powerfully. It is based on Spencer’s observation that “acts like sewing on a button are religious things”. From the beginning, her poem wonderfully draws on the optimistic Biblical imagery in the artist’s work

Spencer himself is given a walk-on part in the later verses.

Cogan’s poem is based on the picture entitled ‘Zacharias and Elizabeth’ and its opening sentence “An English offering” relates to Spencer’s habit of transposing Biblical events to his own location. The strangeness of this painting is captured in arresting images such as

After duly acknowledging the prize winners, this reviewer finds his task becoming more difficult since there is only space to mention a few of the many other poems which deserve praise. If I am to limit myself to around half a dozen personal favourites then I must include Carole Bromley’s treatment of Spencer’s ‘The Lovers’, in which a resurrected dustman(!) is restored to his delighted wife. Bromley gives a beautiful evocation of unconditional love that is also utterly down-to-earth

Lorraine Mariner enters wholeheartedly into the spirit of Spencer’s strange representation of The Last Supper which places unusual emphasis on the disciples’ feet:

Rather than considering a single painting, Alwyn Marriage works with the eight picture group entitled ‘Christ in the Wilderness’. Here is her powerful conclusion to ‘The Scorpion’

Many of the poems focus on the painter as much as on the paintings. Miranda Day cleverly imagines Spencer at work – perhaps embarking on the Wilderness series just mentioned.

A particularly interesting piece by Shez Courtenay-Smith is a ‘found poem’ distilled from one of Spencer’s own letters by judicious selection of words and artful insertion of line breaks. Other contributors may have imagined Spencer’s thoughts, but here we have the artist’s verbatim reflections in his own playful words

(We must assume that the mis-spelling of the last word is Spencer’s own, since it is highly improbable that the editors of this fine collection would have let such a typo get through!)

In conclusion, the London Grip poetry editor might like me to mention that he is also represented by a workmanlike poem in which the presence of a group of cricketers at the unveiling of a war memorial triggers false memories of how “the tail held on to force a draw at Passchendaele” or when “the sun first slipped behind the sightscreen on the Somme.”

This is a fine book and I can think of only two things that might have made it better. One – impossibly expensive in terms of permissions –would have been to have the poems paired with the relevant paintings. A second, more achievable, improvement might have been to arrange the poems in something other than alphabetical order of author since this would have allowed the bringing together of different responses to the same picture and perhaps avoided some needlessly abrupt changes of mood. But this is a minor quibble about one of the most satisfying anthologies I have read for a very long time.