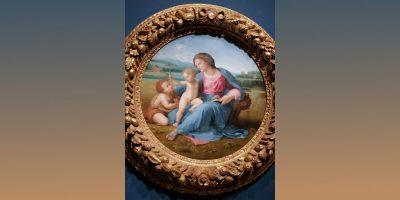 The comprehensive exhibition at the National Gallery on Raffaello Sanzio’s career is an impressive and exceptional display of his most famous paintings as well as his achievements as a printmaker, architect, archaeologist, sculptor, entrepreneur and chief architect of the new basilica of St Peter.  Raphael started working at his father’s workshop in Urbino when he was very young and by 17 he was already famous.  His artwork was influenced by Pietro Perugino and Piero della Francesca at first and later on by the great masters of the Renaissance, such as Leonardo da Vinci, Michelangelo and Donatello.  When Raphael left Urbino and Perugino’s workshop, he spent some time in Florence and then moved to Rome in 1508 where his career flourished under two popes, Julius II and Leo X, and he worked for the richest man in Italy, the banker Agostino Chigi.  He was only 37 when he died after a sudden fever, leaving the art world deprived of one of its most beloved artists, who was a prodigy.

The influence of Leonardo’s background landscapes is visible in Raphael’s paintings, but his colours are brighter and the rendering more even.  Raphael was also familiar with Michelangelo’s frescoes in the Sistine Chapel, that is, the way the Florentine artist shaped the human figures.  However, the poses of Raphael’s bodies are less dramatic than those in Michelangelo’s work.  The balance of the compositions and the elegant shapes of his figures convey a sense of harmony that prevails over the power of the body.  The colours are vibrant; they reflect daylight in a positive vision in which the human figure is central.  Raphael’s capacity to absorb and reinterpret the works of the major masters, who were his contemporaries, in an innovative way increased his popularity and reputation enormously.

According to art critics, he created idealised figures that are realistic at the same time.  Taking inspiration from nature, he improved it without losing its vitality, creating a certain idea of serenity that was extremely successful and attracted commissions.  Looking at his wide-ranging work, his extreme precision and stunning expertise in several disciplines, we can understand why his way of making art became so influential in western artistic culture in the centuries to come.  He was ‘a gift to the world’, as Giorgio Vasari remarks in The Lives of the Artists.

The exhibition traces all the crucial moments of this magnificent career, from altarpieces to portraits and self-portraits, various studies of figures, images of the Madonna and child and of saints, prints, tapestries, a reproduction of the fresco called School of Athens, designs for sculptures, and drawings of ancient Roman buildings; it is an exhaustive vision that looks like a supernatural achievement given that it was attained in only twenty years of Raphael’s artistic career.

Confidence, ambition and the ‘multidimensional nature of his creativity’ are highlighted in the exhibition as well as the ‘apparently effortless’ nature of his paintings.  Examples are his compositions of the Madonna and child and of saints, which are all different from one another.  He improves the traditional iconography of the monumental altarpieces, such as in ‘Crucified Christ with the Virgin Mary, Saints and Angels’ (1502), in which the figures are so perfectly composed against an idyllic background that depicts pure daylight and where there is no sign of violence or blood; the heads of the figures look upwards or are slightly tilted.  The crucifixion seems to have already transcended in the form of the resurrection.  A similar monumental composure can be seen in ‘Virgin and Child with St John the Baptist and St Nicholas of Bari’ (1505), in which the perspective of the throne and the archway conveys a sense of a steady sculptural setting.

Among the beautiful images of the Madonna and child on display, ‘Virgin and Child with John Baptist’ (1510–11) and the so called ‘Bridgewater Madonna’ (1507–8) show the interesting dynamic movement of the figures.  The Virgin Mary is looking obliquely as if contemplating her child’s future destiny; she is caring and meditative at the same time, expressing the tenderness of the relationship between mother and child but also the commitment to the salvation of humankind.  Her robes are depicted in bright red and blue, symbols of the purity of the sacrifice.  A similar dynamic torsion is apparent in ‘St Catherine of Alexandria’ (1507), which is reminiscent of ‘Leda and the Swan’ (1505–7), which was inspired by a lost drawing of Leonardo da Vinci.  The twisted pose of the saint suggests heaven in a serene atmosphere in which the soft tones emphasise the spontaneous acceptance of the martyrdom.

‘St George’ (1505), ‘St Michael’ (1505) and ‘Vision of a Knight’ (1504), an allegory of virtue and vice, reveal a different approach.  The disturbing beasts that surround St Michael and the dragon that attacks St George seem to break the harmony for a moment.  The knight, who is asleep, appears to be unaware of what is unfolding around him.

The numerous studies in pen and ink as well as in charcoal and red chalk clearly show the detailed and innovative preparatory work behind the major pieces.  The observation of the movement of the human body, the drapery and the different foreshortening of heads and limbs show Raphael’s continuous experimentation and analysis that led to his masterpieces.  The portraits and self-portraits, such as the self-portrait from Uffizi dated 1506, completed when Raphael was in his twenties, the self-portrait with Giulio Romano (1519–20), who was his main assistant, ‘La Muta’ (the silent one, 1506–7), ‘La Donna Velata’ (the woman with the veil, 1513–14), ‘Lorenzo de’ Medici Duke of Urbino’ (1517–19), ‘Baldassarre Castiglione’ (1519), ‘La Fornarina’ (1519–20; the young woman in the portrait may have been one of his lovers), and the portrait of the elderly Julius II (1511), testify to the artist’s rapid evolution in rendering the close-up depiction of the sitter so as to reveal their most detailed features.  The poses look solemn and yet convey a moment of intense humanity; the subjects are present in the direct gaze that engages the audience in a relationship with the artist that created it and with the viewer who keeps looking and scrutinising the subject.

In this creative process nothing is left to chance or is marginal; everything is inscribed in a tradition that claims the heritage of Greek and Roman classical style which was reflected and developed in the artistic achievements of the major artists of the Italian Renaissance.  Raphael’s diverse artistic practices established these ideas, setting examples of perfection and influencing the art world for centuries.