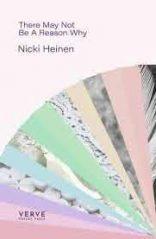 Poetry Review – THERE MAY NOT BE A REASON WHY: Julie Hogg is deeply impressed by Nicki Heinen’s debut collection

Nicki Heinen’s collection There May Not Be A Reason Why is a debut of substance. This is powerful work of prominence and accomplished sass. Heinen’s voice is graceful and searingly honest, making its mark here in no uncertain terms.

In a letter Keats wrote to his brother, he described ‘The Vale of Soul-making’- that is the idea of suffering and the state of melancholy being catalysts for soul creation. In a similar vein, Nicki Heinen fluidly harnesses great sadness and resilience in her Keatsian ‘Vale,’ creating elegantly significant poems such as ‘Melancholia’ in which

The speaker metaphorically travels to, ‘The Mouth of the River Grief’:

From this collection’s biographical background we learn of the poet’s own experience of sectioning and hospitalisation under the Mental Health Act. Poems of weight and gravity are finely balanced throughout the sequence which is satisfyingly ordered, achieving an effortless and intuitive equilibrium. A variety of forms include delightfully polished and proficient prose poems such as ‘Summer at St Pancras Hospital’ which describes personified stifling:

Recurrent sensations flood Heinen’s poetry; ‘The Houseplant Has Come Alive’ has its own unique flavour and rolls like waves:

Particular and exact imagery flows cohesively throughout each poem, stimulating the senses; NHS monograms, feathers, ‘Lebowski’ a much-loved cat, striking colours entwinned with soft trails of cigarette smoke. In the title poem, ‘There May Not be a Reason Why’ the poet declares “I put my hands into/the steel pail of soaked raspberries / just to feel the blood/dab the juice on my breasts”

In testimony to Heinen’s skill, ‘Solent Ward’ is an unforgettable and chilling poem where she exposes and calls out sexual abuse:

‘La Gironde’ is one of many hauntingly natural poems here. Lines in the first stanza provoke a sharp intake of breath: “white into oil-spill into stop-sign into rain ¬– / grey falling over everything like a spotted trout sinking.” Then, “The night is wearing its heat tight – / close-cropped like topiary” In the final stanza; “… it is cold across the universe, / I feel it”

This poet is brave. Heinen is unafraid to write in direct, matter-of fact manner when this is called for by particularly strong poems such as; ‘Quarantine in a flat at the cradle of the station’, ‘Fire-eating in Waterloo’, ‘Functioning’:

and also, ‘The Night Before’, an intense poem regarding the cruelty of heartbreak which snaps in two at an open wound ending.

Dresses float through this collection. ‘Lace’ acknowledges unsaid truths, at more wedding dress fittings than one might care to imagine, by flying in the face of expected protocol:

and a dress is conjured, ‘Don’t Obsess Over Things You Can’t Control’:

A treasure discovered in and through adversity, Nicki Heinen’s debut stirs the soul. Her poetry is transformative and creates a lasting impression. I’m curious and intrigued to look out for Heinen’s future writing.

God in a Can Raphael, National Gallery. Review by Carla Scarano.