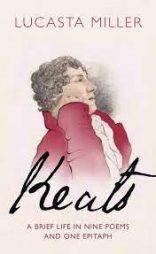 I adore Centennials – better yet the bi, or tri, centennials of a birth or a death – as they give us the necessary ‘distance’ from which to unpack our appreciation of some-or-other ‘Great’ (often, now, ‘iconic’) figure from the past. They perform, too, our most enduring test as to whether that figure is still marketable; how much their stock has risen or fallen over time. Last year (2021) marked the two hundredth anniversary of the death – from tuberculosis, aged only 25 – of John Keats and it occasioned (as it seemed to me at least) small recognition from the wider, non-literary, world. Perhaps we had our hands full with something else?

The two books by Jonathan Bate and Lucasta Miller, though very different, cover much of the same ground – though Bate’s dual-biography deals additionally (and perhaps more successfully) with the life of the American novelist Scott Fitzgerald. The latter was a devoted ‘fan’ who could declaim (a records is still extant of him doing so) large chunks of the poet’s work from memory. Fitzgerald also referenced a number of Keatsian phrases, most notably in the title of his late novel, Tender is the Night (1934). Bate has produced some extraordinary scholarship over the years (one thinks in particular of his biography of John Clare) but here you get the sense of a man writing ‘on auto’. Though he tries manfully to elicit parallels between the two writers, little of true significance emerges save that they were both talented, marginalised in their own time – and died tragically young.

Lucasta Miller sheds rather more light. Her ‘brief life’ is structured around a close and biographically-orientated reading of Keats’ oeuvre. Although she herself uncovers little which adds to the existing record, Miller’s reading has been both thorough and up to date. She borrows from modern commentators such as Helen Vendler – whose graphological insights (on how, for instance, the manuscript of the ode ‘To Autumn’ stretches out the word ‘winnowing’) highlight Keats’ own intense physicality. Miller continues:

There is also, one notes, a species of verbal syncretism sometimes associated with the diagnosis of bi-polar affective disorder.

Miller’s Keats will, to many, be a rather more human figure than that portrayed, somewhat ethereally, by Ben Whishaw in Jane Campion’s (2007) film, Bright Star. She shows us an authentic, sometimes pugilistic, man: a Keats as apprentice surgeon performing a life-saving operation on a woman shot by her jealous husband; a Keats as antisemite (playing a “tasteless practical joke” on the Jewish tenant of his friend, Charles Armitage Brown); a Keats doubling as Abolitionist and, half-heartedly, anti-capitalist; a Keats as would-be roué. She speculates on his possible laudanum use (case not proven) and his recreational use of alcohol.

There are a few longueurs here (why is it that so many biographers feel they have to reprocess their own personal anecdotes?) and Miller’s narrative style, like Keats’, can occasionally be guilty of wooliness and/or wordiness. That said, if you are looking for a short biography of this major Romantic poet, together with a (usually) lucid appreciation of his ‘Greatest Hits’, you could do worse than this one.

In a way that is perhaps only enhanced by the charismatic Whishaw, John Keats has come to personify the archetypal poetic genius: possessed, smouldering, doomed. We stand with him, agape and Agape, ‘silent upon a peak in Darien’. It is hard now to conjecture what he might have become had he lived, like Wordsworth, to eighty. Though he was demonstrably gifted, his philosophy – on closer inspection – can appear half-baked. Beauty as Truth – as a joy ‘forever’; no ‘irritable reaching after fact and reason’… just try conducting a life along lines such as these! The verse, too, can present as both trite and coy with its puffed-up ‘poeticised’ diction (archaic even at the time of its composition) and its unnecessary, distracting inversions (‘travels rude’ and ‘prelude soft’), created – as Keats himself was more than aware – solely to serve a rhyme-scheme. It would take another half-century before Thomas Hardy, a committed Keatsian himself, could begin to disassemble the whole gaudy edifice, to do what Wordsworth aspired to do but so seldom achieved and compose in ‘a plainer and more emphatic language’ nearer to that of the ‘middle and lower classes of society’ -or, as most of us would say, ‘nearer to that of common speech’.