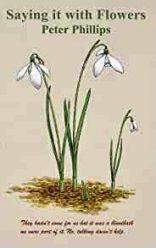 Poetry review – SAYING IT WITH FLOWERS: Thomas Ovans reviews a new collection by Peter Phillips and finds its title to be deceptively gentle

Flowers come in at least two main varieties in this new collection by Peter Phillips. Firstly, there are those which are to be found in places where ugly events have happened – battles, betrayals and massacres. In spite of their own recurring beauty, these flowers cannot distance themselves from the ugliness of human behaviour. Snowdrops report that “hooves ripped the earth,/ then came the cries… They hadn’t come for us but it was a bloodbath, / we were part of it.” Sunflowers recall an airliner brought down over Ukraine when “pieces / of the plane were scattered, some crushed us.” In ‘Ash Dieback’ the trees at risk admit that “yes, we’re terrified, / this is selective” and mention a chilling parallel involving “the yellow stars, groups rounded up.” Even artificial flowers can be tainted by war memories as in ‘Poppy Parade’ where a veteran at a memorial ceremony is shocked to find “my pinstripe suit stinks from battlefield / sweat …” Afterwards

By contrast, there are other plants which display lighter, more playful attitudes. Bindweed attributes its energetic and intrusive behaviour to genetic anxiety, saying that “meditation, mysticism…, that kind of spiritual thing doesn’t work.” Elsewhere a buttercup greets us with “Allo mate. I’m the water meadows wide boy” while mistletoe urges guests at an office party to take advantage of the licence to kiss:

Phillips sometimes includes himself in the poems, often with a wildflower-like simplicity and charm – as when he expresses delight to find there are daffodils in the garden of his new house that match the ones he left behind around his old home. More heartfelt self-disclosure comes in a poem which imagines an impossible meeting with a lost loved one:

Phillips writes clear accessible poetry illuminated by effective imagery and word-choice. Crocuses are “blue and yellow flames … like gaslights / burning in the chilly air.” An opportunistic buttercup is pleased to have learned to “grow my fortune by sleight of petal”. A winter flowering fuchsia is eloquently described

In ‘Cactus’ Phillips plays with similarities between the spikey cactus plant in a care-home window ledge and the irritable elderly patient whose “words, but not my thoughts, are like / a jumble of clothes in a black sack” and who is well aware that “no one wants to touch me” and that “I need a shave. My face is prickly”;. Yet he still has hopes of a more positive comparison with the cactus plant “God, if there is one, let me bloom once more” – meaning that he wishes he could recover an ability to be gracious to his carers. This illustrates the poet’s knack of providing strong, and sometimes unexpected, resolutions to his poems. He is particularly good at payoff lines (but these are hard for a reviewer to illustrate since they naturally depend on the build up provided by the entire poem).

It is only in the second part of the collection that we encounter plants that pose any kind of threat. It comes as a shock therefore to learn of newcomers that

“You won’t find us,” they say – but nevertheless “we’re in your garden.”

The knotweed’s implacable threat is a kind of early warning of what is to come in the final pages of the book. The closing poems deal with the grim prospect of global warming and its consequences. As an object lesson to climate change deniers, Phillips invites readers to imagine taking a ball of ice from a cocktail glass and watching it drip and disappear as they hold it between finger and thumb. “That’s the world melting” he tells them. He then develops that parable in a sequence called ‘Heat Wave’ which spells out a possible chain of events in the familiar and deceptively safe spaces of the UK. On day 10 of unbroken sunshine

By day 19 the narrator observes that “Ice cream was treasure. I found two cases of Evian, / padlocked the shed” and by day 23 he confesses frankly being “glad I had no children.” As the situation continues and worsens he seeks refuge on the other side of the world and we last see him waiting on board an airliner:

In this collection Phillips has addressed serious issues – first on the small scale of the flowerbed and hedgerow and eventually from a world-wide viewpoint. It is rather a remarkable achievement.