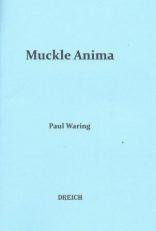 We have to start with that title don’t we? The word ‘muckle’ generally refers to something large, and ‘anima’ to the soul or that part of us which is unconscious. The author tells me that in writing this pamphlet he had something of the ‘collective unconscious’ in mind and wanted to let his imagination run wild as he explored the ordinary as well as the extraordinary. I think that, the more times you read and re-read these poems, the more that ambition shines through.

The first poem ‘Unfinished’ reminds us how all our lives and relationships leave things undone, unsaid, incomplete. The poem ends with the haunting image of “Laika in space”, the poor Soviet dog left to her awful fate floating high above planet earth. The next poem ‘Melt’ follows a similar theme of loss and eternity as the poet invites us to “watch ourselves melt and trickledrift/apart”. We are then forced slap bang back into focusing on the here and now in ‘No Prizes’, which looks at our fatuous attempts to improve our appearance, be seen on social media, live a perfect life:

Waring recalls characters who are probably his parents and grandparents, muses on how we “carry once belonged to ancestors, their dust / recycled…blood a soup / of hand-me-down genes”. He clears a flat after one of these ancestors has died and just one photograph “is enough to flood memory”. There follow other poems that time-travel the reader, none more so perhaps than ‘Love In The Time Of Power Cuts’, which is littered with images of an all too familiar family home and “everything on the never-never”.

Other poems in a similar vein draw on popular music and cultural references, or feature literary characters such as Gabriel Garcia Marquez or Dylan Thomas, taking the reader back in time, even as far as the nineteenth century with the Scottish painter Henry Raeburn. The poet plays with the reader, dangling all these clusters of nostalgia and collective memory like sign posts on a strange journey. There is definitely a psychological element to the exploration, and you can end up feeling as if you’ve been hallucinating or have been to one party too many.

What better way to chill after all this than to dip into one of the poet’s more gentle poems that ponders the natural world. Here he finds an antidote to all the buzz and chaos, as in ‘Night Swimming On Windermere’, where he is “tuned into nothing / but night music – / wind strings and rain”. However, the soundscape of daily life in a more urban environment always breaks through as in ‘When All This Is Over’,as he hears “banshee car and ambulance alarms / the backdrop, soundtrack to my new life”.

The poet ends with a clever mash-up of cliché proverbs in ‘Proverbially Unfinished’, perhaps a metaphor for how he has used all the familiarity of our lives in this body of work to help us realise how much we have in common after all:

Throughout this collection, the reader cannot help but notice the care and craft in the writing, the eloquence in evoking the past and wondering what life is all about. You get the feeling that many of the poems deserve to be heard in the voice of their author, such is the musicality and muscularity of the sounds they embody.