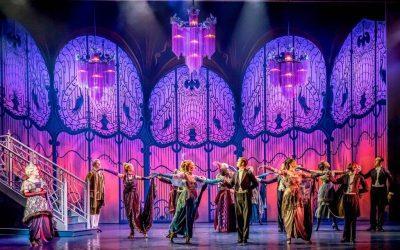 My Fair Lady, the musical version of George Bernard Shaw’s 1912 play Pygmalion is staged at the English National Opera this summer.

The nostalgic vision of Dickensian London, as a city of pea-soupers where the poor know their place and toffs leave the city to parade at Ascot, is never challenged in Bartlett Sher’s 2018 Lincoln Centre production.  It could be argued that Lerner and Lowe’s Broadway musical My Fair Lady is agreeable shlock and that to queer the gaze is to deform the 1956 original.  Certainly there are terrific numbers with stand – alone hits.  Who can resist I Could Have Danced All Night and On The Street Where you Live?  However this is 2022 not 1956 and the production takes place at English National Opera where we have seen so many radical productions that this interpretation appears as Museum Theatre.

The problem starts in the first scene where the stage is an underlit – it’s foggy – get it? – naturalistic representation of Covent Garden.  The use of naturalism within the design of Professor Higgins’ apartments is visual dead weight and an overuse of the stage revolve, mires the first part of the production in mindless movement and endless clutter.  Naturalism rarely works on the giant Coliseum stage.  Only when the narrative moves to the races does the director strip down the mess to a bare stage.  However the Ascot scene merely celebrates, rather than critiques, an aristocratic English society in love with its own power.

There is no distance to the production, no sense of the backstory of British politics so strongly expressed in Shaw’s original text.  At one point two women cross the stage with placards demanding ‘votes for women’.  This offers a momentary nod to the outside world but that’s it.

The audience was full of American tourists, many of whom should have purchased two seats.  I had to fight off one mid-Westerner who spent most of the evening asleep, with his layers of body fat spilling onto my legs.  It is hard not to imagine that this kitsch production was meant as a post-pandemic palliative to attract this particular clientele.

I pitied the cast whose gallant efforts to make this antediluvian theatre production engaging deserved the most credit.  Bravo to them and to the orchestra and conductor who valiantly gave their all.