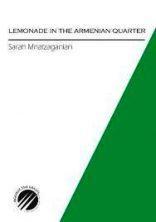 Poetry review – LEMONADE IN THE ARMENIAN QUARTER: Rennie Halstead welcomes the messages of love and forgiveness in Sarah Mnatzaganian’s pamphlet

Sarah Mnatzaganian’s debut pamphlet delves into a store of memories from her background of visits to the Armenian quarter of Jerusalem. In many cases, food is a trigger for memory. The title poem, ‘Lemonade in the Armenian Quarter’ combines these two themes in a recollection of Uncle Hagop, who planted lemon trees outside his house:

Auntie made the lemonade, ’soothed the juice with syrup and iced water’ to Uncle’s great delight. But time moves on, and Uncle Hagop, now needing care, delights when his niece “put a smooth yellow oval into his hand / and helped him lift it to his face to smell the zest.”

‘Cake Again’ picks up the importance of food in family life from a different perspective. Here food, in the form of cake, is the perennial way to express love for the family:

to make a cake to celebrate love, and to send it to distant family, so that both the making and the sending are acts of love. The cake:

‘In Praise of Armenian Cooks’ looks at the idea of cooking from an entirely different perspective. Mnatzaganian recalls the expulsion of Armenians from Anatolia in 1915, with casual murder and forced marches into the Syrian desert. The title of the poem gives no hint of the horror that is to be unfolded. The poem opens with three lines

But the next three lines switch to horror:

The horror continues in the next stanza, referencing the actions of Djevdet Bey, who in his persecution of Armenians is said to have nailed horseshoes to his victims’ feet:

The poem then transitions to remembrance and realisation of consequences:

and the tone shifts away from the horror and loss to hope and the future. The cooking may be done in silence, but it has purpose, it is for someone, not merely a remembrance. Life goes on and the poet manages something positive even out of this horror by observing “Our children are coming home.”

The theme of casual indifference to minorities is picked up in ‘Intifada Street’ where the shuttered shops in Hebron rarely open, where “Black nets veil the streets to trap the rubbish settlers throw / down onto their hosts” and again the reality of discrimination is accepted and the poet moves on, finishing with the anticlimactic line “Uncle Hagop used to catch bus 231.”

This is not just a collection of poems about food. Mnatzaganian has more to say about love, memory and family history. In ‘Ursula’ she focuses on the brief moments growing children allow their parents to share their lives:

The poet traces the different ethnic strands that make up her daughter: Armenian forehead, Jewish eyes, English mouth and nose; and she sees her as no longer a child in her fashionable dungarees that “grin tightly round her hips with shiny, / square teeth.” She shares the mix of loss and pleasure to see a child grow up and become independent:

The delightful ‘My father taught me at night’ picks up the theme of parental love from another angle. The title runs straight into the poem:

True to the child’s mixed heritage, the father whispers his love in many languages: Armenian, telling of love and beauty; Arabic from the West Bank to “make my heart / strong enough to live”, a smattering of French to assure her of his love. But as in other poems in this selection, the conclusion edges us back into the reality with the recognition that along with life and love comes uncertainty:

This is a memorable pamphlet. Some poems have that sticky quality; like earworms, they remain in your mind and can’t be dislodged. The brutality and forgiveness in ‘In Praise of Armenian Cooks’, the practical love of ‘Cake Again’, and the huge sense of parental love in ‘My father taught me at night’ create an overwhelming impression of the importance of love and forgiveness. It was a pleasure to review this pamphlet. Highly recommended.