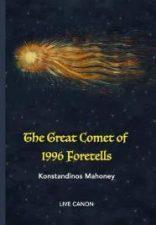 The Great Comet of 1996 Foretells is Konstandinos Mahoney’s second book of poems and it won the 2021 Live Canon Collection Competition. As his name suggests, Mahoney has a mixed Anglo-Irish and Greek heritage. The collection opens with a sequence of richly evocative poems that reflect on his Greek background, recalling childhood visits to Greece, his baptism into the Greek Orthodox church and a trip to the vertiginously located monastery at Athos. In ‘Total Immersion’:

Mahoney’s sense of connection to the soil and the importance of family is beautifully expressed in ‘Mother Olive’, about an ancient olive tree which is flanked either side by its younger offspring. This poem is a wonderful example of how a poem can work effectively at two levels at once:

Mahoney currently divides his time between Greece and England and the collection moves back and forth in time as well as geographically. In this way it resembles an autobiographical film, such as Andrei Tarkovsky’s Mirror, with complex interrelationships of time, memory, people and places.

Parallels of time are compressed to striking effect in ‘Lingua Franca’ where the blinkered and xenophobic nature of British society is highlighted. The first stanza is set in 1948 when the poet’s mother is abused on a bus for speaking Greek while the second takes place in 2018 when a Spanish speaking nurse is abused on the bus for speaking Spanish, sadly illustrating that, in this regard, little has changed.

The spirit of Brexit Britain is skewered in the final poem in the collection ‘Missing the Bongs’ where the poet (on the night of the referendum result) walks mournfully along the Thames from the Globe to Waterloo Station, observing the Thames, which is ‘in no mood to pose for a photo, just wants to flow the hell back / out to sea away from this lunacy.’ Reaching the station he observes an ecstatic leave voter arrive: ‘a red-faced reveller fresh off a train, wrapped in a nylon / union flag…’ hurrying to Parliament Square to celebrate to the sound of Big Ben.

This a rich collection of poems that celebrate living life to the full. The title poem wittily recounts donating sperm, so that two friends (a lesbian couple) can conceive a child. In this poem the clinical process is given parallels in mythological terms:

Other poems recall visits to New York City when it was a dangerous place to stay: ‘cabbie won’t stop outside the Y, drops us a safe distance away we pay through a bullet proof screen’, or snorting cocaine in the toilets of a London discotheque in the brilliantly tilted ‘Hermes in Heaven’. In ‘Peace Pipe’ he tries, unsuccessfully, to connect with his estranged daughter through sharing a bong but the smoke makes him choke; ‘He asks what she remembers. A film you made me watch when I was six, a man / gets eaten by ants, everything except his glasses.’

The poem ‘Did You Write This?’ has a nightmarish quality; the poet is confronted in the bathroom by his dead mother who chastises him for writing his first book of poems: ‘She materializes in the steamed up / bathroom mirror brandishing a book. / I recognize the garish cover.’ Mother and son argue and there is no resolution; but there is no escaping the fact that the truth often hurts and finally he goes to sleep

As the title might suggest, this is a book of revelations expressed through poetry with a fierce honesty and a huge amount of compassion. It reflects a complex life lived in many locations, both geographical – in London, Athens, New York City, Hong Kong – but also at a psychosexual, imaginative and interpersonal level. It’s one of those books that leave you wanting more. But the great thing about poetry is that you can always go back to the beginning and discover new meanings.