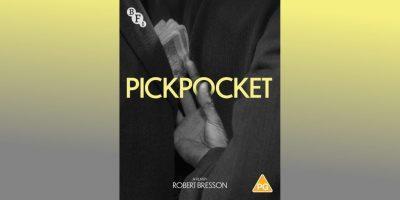 “What no human eye is capable of catching, no pencil, brush, pen of pinning down, your camera catches without knowing what it is, and pins it down with a machine’s scrupulous indifference.”

Published in 1975 Bresson’s tantalisingly philosophical book Notes on the Cinematograph consists of notes, fragments, observations, wise lists about life and the difficult challenges of filmmaking.  Bresson’s remark about the camera’s ability to indifferently record life happening un-dramatically, in front of the lens, feels more than appropriate for his 1959 film Pickpocket.

In Bresson’s melancholic and limpid film we experience a sense of the interaction of the passive crowd and individual anxiety as a handful of persons (thieves, friends, possibly lovers and an investigator try to intimately relate.) They appear conforming and tired; not free but trapped by habit to act out banal responses:  caught in an existential contingency leaving them in a state of indifference.  Almost as if they were half-conscious.  Almost as if they were automatons.

And this very matter of fact behaviour whether collecting money from the bank, watching a horse race, buying a train ticket, sharing a drink or playing cards is only shaken when pickpocket Michel (Martin LaSalle) is caught in the act of thieving or gets angry with his trailing chief inspector.  On screen these moments register like a small explosion.  Bresson is a master of sound design.  He makes the snap of the handcuff on Michel’s wrist or his throwing down of a book, in front of the detective, and loudly crying “never” become part of a spiritual process to reveal Michel’s isolation.

And movingly so when Jeanne (Marika Green) quietly reproaches

Michel “You’re not in the real world.  You show no interest in others.” At this point she’s falling in love with Michel shortly after his mother has died from whom Michel had stolen money.

Yet Michel doesn’t really need the money even though he’s unemployed.  His motivations for stealing are made deliberately vague.  Michel talks of a class of people (Supermen) who are above common morality and if they have a conscience their thieving can be excused.  The chief inspector (Jean Pelegri) who trails Michel, often more like a concerned friend than policeman, refutes the idea.  “That would turn the world upside down” To which Michel replies, “It already is.” Here Bresson implies, like Camus, whose protagonist Meursault in L’etranger is also indifferent to the death of his mother, that the world is absurd and existentially created by oneself in the moment.

Throughout Pickpocket Bresson sets up subtle cat and mouse encounters between the inspector and Michel.  However unlike Dostoevsky’s Crime and Punishment (often referenced by writers on this film) the interrogation becomes equally a means to help, as much as to convict Michel.  When Michel taunts the inspector, as to why he is hounding him, he says “To open your eyes to the way you are.  Pause.  Then enigmatically.  “To get ahead.” That getting ahead implying achieving redemption over ambition.

Both the inspector and the teenage Jeanne are trying to ‘save’ Michel.  Not naively rescue him in a Christian sense but break through, emotionally and spiritually, and get Michel to respond.  All the characters of Pickpocket maintain impassive, un-emotional expressions – so often their eyes, after conversations, look downwards, never shamefully but as if timidly desiring grace.  When Michel’s friend Jacques says to him that because Michel’s never been in prison, he’s no idea what it’s like.  Michel angrily replies that he does know and we immediately realise that he’s creating his own mental prison.

Bresson’s ‘Technical Adviser for the Thieves’ Gestures’ (a unique film credit!) was a real thief simply known as Kasaki who was also cast to play accomplice no 1 along with accomplice no 2 director and comedian Pierre Etaix.  Once teamed up with Michel their pickpocket activities are filmed with marvellous fluidity – packed with almost invisible tracking shots according to Godard and Doniol-Valcroze.

You admire the sheer elegant style of their thieving: those folded newspapers placed over withdrawn wallets or exposed banknotes; a bag dropped in a waste bin; the passing on of their wares to each accomplice or an emptied wallet returned to a victim or was it an accomplice.  All executed in silence or sometimes accompanied by the formal eighteenth century music of Jean-Baptise Lully.

Hands always play an expressive role in Bresson’s films: their movement effortlessly transitioning into a spiritual gesture.  I love how Bresson films Michel’s hands moving up a man’s jacket.  How he can make that appear holy instead of furtive amazes me.  I think of Durer and his great drawing of praying hands – but in Pickpocket they’re now unclasped and probing.

Not that Michel is praying to God (After Michel’s mother’s funeral he’s asked by Jeanne about his religious inclinations and angrily declares, “I believe in God for about three minutes!”)  Somehow it feels like Michel’s more ‘praying’ that his trained fingers get his pickings and perhaps three minutes is the time, with an allotted grace, that he and his accomplices need to accomplish the first stage of their steal?

The purity of filming in Pickpocket is astonishing.  Of all Bresson’s films it probably has the finest economic storytelling.  Very few directors could ever conceive of or achieve Bresson’s rigorous and poetic compression of image and sound.  Everything is said in a sparse 75 minutes.  Nothing is superfluous.  And Pickpocket has one of the most sublime endings in cinema, with prison providing the setting for the passionate, yet still constrained, expression of Jeanne and Michel’s love.  This beautifully directed scene both reveals and holds back their affection.  Observe how they kiss.  I will say no more.

Pickpocket is a great soulful film.  And I can see why directors like Paul Schrader and Werner Herzog hold it in such high regard.  For Bresson is a directors’ director.  If I were to choose my favourite Bresson masterpieces they would still be A Man Escaped, Mouchette and Au Hasard, Balthazar.  I find them more moving than Pickpocket.  But the power of Pickpocket grows and grows on me.

If you’ve never seen Pickpocket then be patient.  On first viewing it can feel too austere, even forbidding.  But quickly re-watch it and its apparently concealed feelings, ideas and muted passion are revealed.  Pickpocket’s imagery, framing (So many left-open doors to freedom (?) through which characters enter, exit or hesitate by) superbly precise editing and a documentary- like ‘realism’ should make you re-engage with the film’s remarkable spiritual stealth.

On a Blu Ray technical note although this 2k restoration print appears to be somewhat darker, than the film I remember, it soon feels atmospherically right.  And the BFI release also contains some enticing extras.