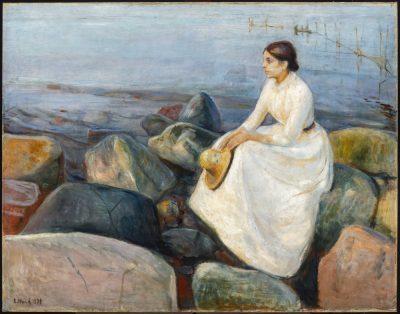 The Courtauld, London
Until September 4.

“Disease, insanity and death were the angels that attended my cradle,” Edvard Munch wrote.  They went on to haunt him for the rest of his life and to become the driving forces of his art.

While the conservative citizens of Kristiania, now Oslo, dismissed his work as “bizzarro”, Munch was quickly appreciated by the Norwegian industrialist and philanthropist Rasmus Meyer.  His acquisitions produced one of the world’s most important collections of Munch.

We in turn can gain precious insights into how much more there was to Munch than The Scream as 18 of these works, on loan from present-day custodians the KODE Art Museums in Bergen, are shown together for the first time outside Scandinavia in an upper gallery, next to the Courtauld’s impressionist and post-impressionist works that informed Munch’s early experiments before he graduated to the expressionism for which he is best known.

A pivotal work is Summer Night.  Inger on the Beach (1889).  The model is his youngest sister, and, in a foretaste of Munch’s later practice of making personal mood inseparable from its surroundings, the rocks of the beach and calm twilight-blue waters suggest Inger is suspended in a state of melancholy.  The almost luminous white of her dress, like so much in Munch, at once implies the positives of youth and life and the overwhelming negative of death.

It’s the colour that shrouded his elder sister Johanne Sophie, who died in 1877 of tuberculosis, and is remembered painfully and vividly in By the Deathbed (1895).  It’s also the colour of the ashen-faced, bereaved relatives as Munch brilliantly conveys the shock, anguish and disorder of raw grief.

In Evening on Karl Johan (1892), Munch again gives his characters corpse-like white faces, but this time, they reflect not so much their own disturbance as the nightmarish turmoil of the lonely, dark figure seen walking away as he searches in vain for a woman with whom he is infatuated.

The painting is a precursor to the explosive anxiety of The Scream and it’s the negative to the pointillist Spring Day on Karl Johan (1890) when the mood is light and airy as the crowd flows along in a happy swarm of brightly-coloured dots.

The motif of the unrequited individual is in full focus in Melancholy (1894-6), inspired by Munch’s friend the writer Jappe Nilssen.  While he broods in a foreground that is a darker, more morose take on the rocks of Summer Night, far in the distance are the figures of another woman in white walking with a man, who is perhaps the lover who has stolen her from Nilssen.

A period of treatment for Munch’s emotional stress produced Self-Portrait in the Clinic (1909).  It could be read as a triumph of an upbeat Munch, who paints himself against a yellow, purple, turquoise backdrop, staring steadily, even energetically from the frame.

The same verve is evoked in Youth (1908), a near-life-sized depiction of a naked young man on the beach.  He dominates the composition but is not alone as the colourful waves behind are surely filled with happy, naked abandoned figures.

The cumulative effect of all this shuttling between potentially happy summer evenings and solitary, wintry despair is that however much Munch is drawn towards the bright and healthy side of life, the dark angels, for him, infuse everything, within and without.