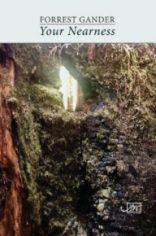 The first thing that struck me as a reader new to Forest Gander was his astonishing power to communicate attentiveness to the world around him. The next was how quickly attentiveness becomes something more probing. ‘Aubade’ is the first poem in Your Nearness:

The extremely sensitive, precise language creates volatile and complicated effects. On one level there’s an active, verb-driven sensuousness to the opening. But it’s sensuousness of an unstable, dreamlike kind. With ‘edging close’ we almost see dawn tentatively edging towards the sleepers, but what the question asks us to do is to hear dawn and hear light. Moreover, there’s an extraordinary empathetic projection into the imagined bodies of dawn and the light: edging close and gripping the bedroom wall, they seem as alive, as sensuously conscious and purposeful as any animal or person. As the poem proceeds, bedroom and garden seem to crowd with separately conscious lives interacting with and blurring into each other. The synaesthetic images of hearing light, of a voice being flecked with sleep, or of hearing something feelingly, reflect this constant interplay of energies. What Gander is drawing us into here is an idea that runs through the whole book, which he expresses in more abstract terms in the ‘Author’s Note’: the notion that ‘our identity, all identity, is combinatory’.

I don’t know whether this is deliberate or even conscious on Gander’s part but the questions in this passage strongly remind me of some lovely lines in Ezra Pound’s ‘Canto CX’:

One great difference is that Pound’s stag and sheep, coral, turquoise and oak remain wholly external to man. Gander’s book, in contrast, is suffused with a belief in the way identities absorb life from and flow vitally into each other. Another difference, of a more technical sort, is that Gander draws extensively on his grounding in science. His first degree was in fact in geology, though it’s biology that particularly informs Your Nearness. This background informs his sensibility in a way that enhances the value of his work. There’s a peculiar calm grandeur to his writing. I think it derives from his seeing things, including his own subjective reactions, in the light of the universal and durable laws of biological, chemical and physical process.

Admittedly, scientific terminology can create difficulties for the non-scientist. In ‘Twice Alive’, I had to keep pausing to look up words. Here are its first four, almost wholly unpunctuated stanzas (I haven’t yet understood why each stanza in this poem has one or more words in bold):

The lexical problem is undeniable, but the precise, meditative movement means that grappling with meanings and even looking words up doesn’t jar against a swifter involvement. And the difficulty brings considerable rewards. One, of course, is simply the information itself. From a more literary point of view, there’s a beauty and strangeness to the way the poetry swings between different linguistic registers and images, layering aspects of the poet’s consciousness over each other, each not blurring but sharpening the others. This enhances the sense of wonder at the phenomena described. By demanding careful reading, the difficulty of the writing heightens attention and makes one see things with fresh eyes. The poet himself draws no conclusions from the material he assembles, but a multitude of thoughts and connections suggest themselves to the reader. I’m particularly struck by the odd tenderness released by the anthropomorphic language of the third stanza (especially coming after the sinister ending of the second) and by the extreme sensuousness of the fourth, in which he seems to be speaking to the wife or lover accompanying him on his expedition. (The entwining of violence with sweetness produces its own tantalizing suggestions about the inescapable violence of life.)

The first stanza of ‘Twice Alive’ looks at symbiosis in lichens. However, in the passage from the ‘Author’s Note’ that I’ve quoted before, Gander also relates it to human love:

Many of these poems are implicitly or explicitly about a love relationship, presumably that with the person addressed in ‘Twice Alive’. So ‘Forest’ begins with an erotically charged description of an oak forest:

At the end there’s an explicit swerve to the human:

‘Sea: Night Surfing in Bolinas’ ends with a poignantly explicit declaration of shared love between the speaker and someone who waits for him on shore while he surfs. What’s most remarkable in that poem, though, is the brilliance of the descriptions of the sights and sounds of the waves in darkness. When I first read it, I saw those descriptions simply as evocations of the scene in which the night surfing takes place, and of the state of mind of the surfer. Now, it seems to me that those stanzas vibrate with implicit analogies for the relationship itself and his feelings as he entered it.

This, it seems to me, touches something fundamental about the way the book works. It’s saturated in a sense of analogies between different aspects of human and non-human life and the symbiotic relationship of the two. I almost said that when he seems to be talking about one thing Gander is often really talking about another, but I think that would fail to do justice to the reciprocal way analogy works in his writing. He’s really talking about both, and seeing each reflected in and illuminated by the other.

I’ve emphasized the love theme running through the book. I might have focused instead on its profound concern with the environment. This produces a number of superb evocations of different aspects of the Californian landscape, all too often darkened by reflections of environmental catastrophe. The richness of this book means it can be approached from many different angles, and each poem sets the mind moving in many directions.

I found the form of some poems alien and in some ways bewildering. I still don’t know what to make of the raised dots (indicated here by asterisks) punctuating ‘Aubade’ and several other poems. I presume they indicate something like a pause in reading aloud, but I’m not sure. The one poem that failed to speak to me on this account was ‘The Redwoods’ with its strange device of slashes slanting left and right in the space between lines. Elsewhere, I felt that formal strangeness was acting as a positive spur, both loosening up my reading and enlarging my sense of formal possibilities.