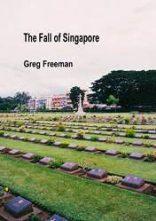 Greg Freeman’s short collection The Fall of Singapore, published on the 80th anniversary of the British capitulation to the Japanese in 1942, is drenched in history and family memories as well as in social and political references. More recent events such as the fall of the Berlin Wall, the Falklands conflict, the Bataclan terrorist attack in Paris are embedded in the narratives as along with some refugee-related issues. The focus is on civilian casualties during the First and Second World Wars and the consequences for British troops of the surrender to the Japanese.

After the surrender, Freeman’s father was subjected to forced labour alongside all the other Allied prisoners working on the Burma–Siam railway, also known as the ‘Death Railway’. A great number of them died because of the horrific conditions and unbearable weather. Freeman’s father managed to survive, though in the ‘Notes to the Poems’ his words are a stark and unforgiving remark about the experience: ‘It’s the law of the jungle son […] None of us matter at all.’

His dad is described as an ordinary man with strong feelings and a singular determination that make him unique:

He is ‘no hero’, and a better description is an anti-hero if he is compared with traditional heroic figures. He is not devoted to useless sacrifice but to wise survival. His personality stands out because of his clever ordinariness that enabled him to navigate his way through life successfully.

The central section is dedicated to the fall of Singapore and Freeman’s father’s role in the event. Retracing the story, Freeman emphasises the suffering of the prisoners and the civilians and the shortcomings of the powerful rulers who decided on the destiny of so many people. The events are precisely described as they really happened, with honesty and insight. Prose sections alternate with poetry, giving a voice to the father’s storytelling. He resists the humiliation and the hard labour by recollecting family memories in the midst of ‘relentless rain / seeping into bones’ and also in the ‘ravenous darkness’ that entraps the soul. He does not lose heart despite the dysentery, cholera and malaria that ravage those in the camp. The conditions that the prisoners had to live in were similar to those in the Nazi concentration camps, although Japan gave sick people some medical attention and did not carry out a genocide or send the prisoners to gas chambers. When Freeman’s father returned to England, he ‘hid indoors for days’ as he was aware that people would not understand what he had suffered and how much the experience in Burma had changed him.

The poems build up the context in lists and enumerations that allow multiple views:

This technique involves plenty of imageries that are used in a sparing style that is a trademark of Freeman’s poetry and opens up to the imagination in a dialogue with the reader.

‘Cherry Blossom’ is one of my favourite poems in this collection; it cleverly takes the tragedy of death, evoking the ‘unknown soldier in the mud / and blood’, and merges it with the delicate quality of cherry blossoms, the Japanese symbol for beauty and decay. The ‘heroic’ mission of Japanese pilots who were prepared to deliberately kill themselves by flying their planes into the enemy’s ships is connected to the flowers that were painted ‘on the sides of planes.’ They ‘symbolised clouds’, bright and shadowy and ‘the ephemerality of lives.’ It is a striking and ambiguous image which connects sacrifice to beauty and shows how this affects the culture of an entire nation.

The last poem conveys a positive message that is also enigmatic:

As Freeman acutely remarks, the little green man works as a logo but also as an ordinary figure that effaces ‘Germany’s blackened history, / offering normality’ and connects to the dictatorship of the GDR. The ending of the poem is controversial:

The poem emphasises changes but also possible backlashes in a social and political world in which the decisions of the mighty rulers have traumatic effects on ordinary people – which is what happened in Freeman’s father’s experience. Behind the apparent everyday normality there is a darkness that is ruthless and reveals sheer exploitation. It is a tough world in which we need to renew the fight for freedom, equality and peace; Freeman seems to suggest that the struggle is ongoing. He is committed to witnessing and voicing the wrongs, as his father did. However, both father and son look at the positive side of life eventually, as his father shows, having defied the odds of life and survived: ‘when Match of the Day came on, / while eating a banana he danced a jig’.