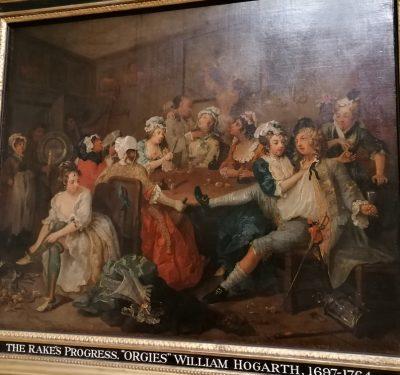 The exhibition highlights Hogarth’s artistic connections with his European contemporary artists and his satirical depiction and moral flogging of Georgian Britain.  We understand from the exhibition that Hogarth was an English painter with a sturdy character, born and raised in London but inspired by, and in turn influenced, European painters such as Giuseppe Maria Crespi, Cornelis Troost, J-B Simeon Chardin, Pietro Longhi and Antonio Guardi.  Their paintings are displayed alongside Hogarth’s to show the mutual influence and how social life in different European cities was similar.  Maps of London, Paris, Amsterdam and Venice are also on display to highlight their expansion, thriving commerce and social exchanges.

The 18th century was a time of change.  Artists started to work independently, rather than just for patrons, so they could express their thoughts more freely and comment on social life.  The subjects of their work shifted as well.  Urban scenes and family settings were substituted for the ancient myths and religious scenes that were typical in previous periods when the Church and aristocrats commissioned the artworks.  The new themes reflected the emerging interests and preferences of the middle class.  London was a cosmopolitan centre of banking and trade; Paris was the second largest city in Europe after London and the centre of luxury goods; and Amsterdam was an important trading centre as well.  On the other hand, Venice was losing its political and commercial importance and becoming one of the major tourist destinations of the grand tour.  The exhibition connects these four cities by looking at them through the lens of ordinary people’s lives and social issues.  These scenes point to the changes in society that were occurring at the time, and the moral and social problems are often expressed and revealed in the dynamic movement depicted in the paintings.  It is a progression that shows chaotic situations but also envisages possible alternatives to the static aristocratic world.  Dynamism and confusion seem to guarantee change and renovation and suggest new roles whose negative sides are often highlighted by the artists.

In this perspective, Hogarth’s moralistic view depicts the depravity and hypocrisy of this society.  He shows unruly mobs in ‘The March of the Guards to Finchley’ (1749-50) and poor people starving and consumed by alcoholism in ‘Gin Lane’ (1751), and depicts the excessive drinking and debauchery in politicians’ gatherings.  Hangovers, drunkards and depravity are ruthlessly and shamelessly exposed, pointing to the vanity, cruelty and, above all, the hypocrisy of the ruling class and of humanity in general.  White people are in the spotlight; they take advantage of the most vulnerable such as black slaves, women and children, abandoning themselves to acts of debauchery and violence.  Hogarth therefore uses his artwork as a weapon against corruption and injustice, ridiculing and satirising his contemporaries’ lack of morals.

Hogarth was famous all over Europe for his realistic, witty depictions of city life and his satirical view.  His masterpiece series ‘A Harlot’s Progress’ (1732), ‘A Rake’s Progress’ (1732-34) and ‘Marriage à la Mode’ (1743) expose the consequences of sexual exploitation and moral downfalls.  Lack of morality causes chaos, the horrors of slavery, sexist and xenophobic crimes and eventually derangement and death.  Economic prosperity does not seem to produce a healthier society; on the contrary, it triggers wrongdoings and depravity.  Hogarth’s art highlights these contradictions and relentlessly comments on their effects.

Though the exhibition points out that Hogarth’s view was ambiguous at times, the viewer cannot help but admire his clever and skilful work.  His paintings and etchings are not only appealing because of their parodic, thought-provoking angle but are also executed in a masterly way, developing the narratives in engaging details that subtly comment on the central theme and reveal the artist’s expertise.  Movement is central in his works and conveys uncertainties but also dynamism.  It is a world in progress that suggests alternatives in the hope of constructing a fairer society.

His most interesting pieces are the portraits such as ‘Miss Mary Edwards’ (1742), ‘Heads of Six Hogarth’s Servants’ (1750–55) and ‘David Garrick with his Wife Eva-Maria Veigel’ (1757–64), in which emotions and personal feelings shape the characters.  They are not stereotypes and do not represent stiff figures, but speak to the viewer with their facial features and their gaze.  The myths of the past and fixed social roles are therefore challenged in an attempt to attain a more equal society, exposing the hypocrisies and wrongs of the reality he observed and experienced.  His view is therefore personal and rooted in the context of his time and the place where he lived, that is, London, but is also universal in his keen study of humankind, whose flaws continue despite the desperate aim to progress and to achieve perfection.