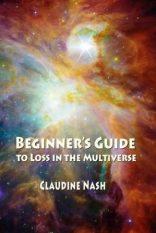 It’s clear from the very title of Claudine Nash’s Blue Light Press Book Award-winning collection that she has a subtle sense of humor. The title, of course, plays on Douglas Adams’ whimsical comedy science fiction classic, The Hitchhiker’s Guide to the Galaxy. But loss is also at the center of this collection, and loss is never funny. It’s the attitude that counts, the perspective! While not necessarily a “how-to / self-help” book, Beginner’s Guide to Loss in the Multiverse weaves emotions throughout a fragmented reality that combines “possible” and “real” in a narrative of wish-fulfillment, fully acknowledging longing but never dwelling in self-pity. Beginner’s Guide to Loss in the Multiverse is, indeed, a sensitive love song.

Each of the thirty-two poems in this book is located in a different numbered universe – one of them, “Unlike Here, Universe 12,146,091,” even requiring up into eight digits! The collection begins in #415. “Beginner’s Guide to Loss in the Multiverse, Universe 415” orients us to the situation:

While the “story” remains abstract, almost theoretical, the sensuality is always immediate, visceral, as in “Pretend that You are Talking Universe 3,082,018”:

And the final poem in the first section? Reading it, we “get” the sly humor that underlies Nash’s tone throughout, undercutting any hint of self-absorbed misery. The images are still so very sensuous, but the suggestion of space-fantasy aliens is vivid and amusing.

The final section, “A Stunning Matter,” begins with the poem, “The Making of Memory Universe 101,177,” and already the situation starts to feel “retrospective,” but then, since we’re always dealing with parallel universes here, in which time is not necessarily continuous, each moment discrete, disconnected, is anything really in the rearview? But still, it all feels “settled” now, in some way.

Nash’s sense of humor comes out again in “How I Lost All Interest in Telekinesis Universe 2,013,051.” The poem ends:

“How Not to Flirt in the Multiverse Universe 771,199,” which follows, continues to bring a smile. This poem ends:

Beginner’s Guide to Loss in the Multiverse is at once tender and speculative, not actually “heartbreaking,” even as it deals with a broken heart; the reader is more sympathetic than pitying, for sure, charmed by Nash’s humor. Face it, when it comes to loss, we’re all rank beginners.