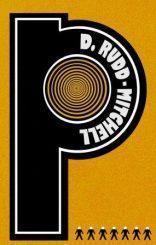 Any novel set in a future Britain under a totalitarian government called The Party risks comparison with George Orwell’s 1984. David Rudd-Mitchell’s short novel P accepts that risk; but initially distinguishes itself from the Orwell’s dystopia by being set more than a century (not just one generation) later than the time of its writing. Hence it can imagine a more drastic transformation of the world today’s readers are familiar with. Furthermore, Rudd-Mitchell seems to be more concerned than Orwell was about the trajectory leading from now to the then inhabited by his characters.

The central character in P is called Norwich Merseyside Milton (everyone in the book has names with a geographical flavour; if there are reasons for this I did not pick them up). Fortunately he is referred to throughout the narrative more succinctly as Norwich. Like 1984’s Winston Smith, Norwich appears first as a fairly contented and compliant low- to middle-ranking Party member employed as a university academic. (Those of my friends who are still employed in Higher Education may feel that some of the complex and authoritarian structures within which Norwich has to operate are not particularly far-fetched!) When the story begins, Norwich is being offered an opportunity to be admitted to higher echelons of The Party which involves him going through a carefully controlled process of re-education. However it turns out that unforeseen events can occur even in a well-established tyranny and Norwich finds himself almost overnight being granted access to top levels of information. As a result, he (and the readers of the book) discover not only what really motivated the original founders of The Party but also the true state of affairs in the world that The Party is now running.

It is not the place of a reviewer to reveal the revelations that are granted to Norwich. It is sufficient to say that the latter part of the book is a quite subtle exploration of how Norwich’s initial loyalty to The Party stands up against the stream of unsettling information that pours from the archives.

The first two-thirds of the book feature a number of supporting characters, including university staff and Party officials. Here the story is fairly event-driven as Norwich is admitted to regions of the city which were previously out of bounds to him and has to adjust to the improved quality of life available there. In the final fifty or so pages, however, there are hardly any human interactions and the plot chiefly advances through what Norwich learns from a computer screen. There is an appropriately claustrophobic feel to this way of story-telling but, for me at least, the book was more of a page-turner when it involved encounters and conversations – even when these were conducted in the stilted language of people aware that they are being monitored and might have to answer for any careless remarks.

P is an enjoyable book whose main story-line combines speculative fiction with possible responses to situations and problems that are recognizable in today’s world. This produces some alarming hints about where certain unwise “solutions” might lead. I did feel, however, that some elements in the sub-plotting were left rather unresolved, particularly as regards the motivations of disembodied characters who address Norwich via his computer screen. The most vividly drawn personalities are Norwich himself and a Party functionary called Henley who is given the job of being Norwich’s mentor. Henley owes his position to family connections rather than ability and he is much too self-absorbed and disorganised to be entrusted with such a responsibility.  I wonder if it is a coincidence that he shares his name with our present Prime Minister’s first parliamentary constituency