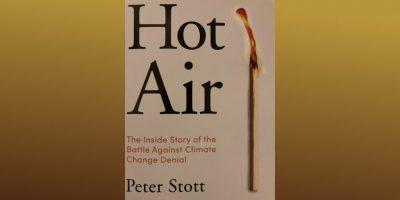 Hot Air: The Inside Story of the Battle Against Climate Change Denial

A year before the Kyoto Protocol committed the developed world to reducing its greenhouse gas emissions, Britain’s Education Act of 1996 incorporated the Thatcher government’s 1986 Education Act that was designed to deal with a perceived issue of left-wing teachers indoctrinating school pupils.

Two decades on, mathematician Peter Stott found himself defending climate science against its deniers, who used Thatcher’s legal legacy to take to the High Court their objections to Al Gore’s climate change documentary An Inconvenient Truth being streamed in schools.

Days before Al Gore and the U.N.’s IPCC (Intergovernmental Panel on Climate Change) team, including Stott, won the 2007 Nobel Peace Prize, those on the other side of the climate divide won a High Court judgment that found An Inconvenient Truth contained errors, dealing a huge blow to its credibility in the eyes of the general public.

Reflecting in relative tranquillity, the episode is a demonstration of the lengths some will go to preserve the fossil fuel status quo for as long as they possibly can.

In his nearly 300-page account of the sceptics’ determined delaying tactics, Stott tells us that scientists were beginning to understand human activity was the cause of global warming as early as the 19th-century and have been amassing increasingly compelling evidence ever since.

Stott does his best to end his narration of the decades of combat between the sceptics and the scientists on a note of hope after the nail-biting victory of U.S. President Joe Biden over arch climate science denier Donald Trump.

The reality, however, is that even though climate science is overwhelmingly accepted, climate change scepticism continues in a subtler guise: almost no one is doing enough about it, which is a form of denial.

In this context, Stott’s book is a passionate wake-up call as politicians fearful of public opinion, corporations clinging to business models that should be obsolete and people addicted to consumption and holidays in the sun create a complex web of inaction.

The science is on one level beautifully simple if we take the trouble to read Stott’s lucid book distilled from 25 years of often bitter experience.  He explains the linear truth that for every unit of carbon released into the atmosphere, there is an additional increment in global temperature rise.

Ever more carbon is in the atmosphere, meaning the amount we can emit is decreasing fast if we are to avert catastrophic temperature rise.

The odds of extreme weather events meanwhile have shortened significantly.  Stott compares it to a loading of the dice, or in other words the abnormal is becoming normal “at a frightening pace”.

In terms of world responses, Britain is in theory a leader.  It may have delivered the Education Act, which managed to hand a victory to the climate deniers, but with the Climate Change Act of 2008, the United Kingdom became the first country to enshrine in law a binding climate change mitigation target.

The concern, as with so much of this story, is how that translates into practice as Britain, following its presidency of the Glasgow climate talks, leads U.N. efforts to increase global climate action until it hands over to Egypt in late 2022.

While Britain and much of the world appear focused on COVID-19, political infighting and short-term economics, Stott reminds us we probably have a year or two left to deliver a strategy if we are going to succeed in capping global warming at 1.5 degrees Celsius.  We barely have time to be thinking about anything else.