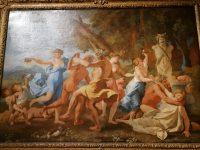 Poussin and the Dance.

Whirling movements, careful choreography and harmonious compositions characterise the works of Poussin that are on display at the exhibition at the National Gallery.  He cleverly combined a rigorous study of Greek and Roman antiquities with Baroque sensitivity.  This association gives a sense of order and harmony to his work together with a poetic quality.  These apparently opposed aspects allow Poussin to revisit the classics through a modern interpretation that points out the instability of the human condition that is always moving and in flux.  In his imaginary ordered world, the juxtaposition of forms, figures and colours is meant to convey the clarity and balance of the construction that refers to Roman friezes and sculptures and, at the same time, to reinvent them.

Poussin started out at the French school of Fontainebleau and is considered the father of the French School of Painting.  He influenced painters such as Jean-Louis David, Delacroix, Ingres, Cézanne, Picasso, Braque and Francis Bacon.  He was considered a hero by Balzac and was often evoked by the French Romantics, such as Chateaubriand, in their writings as an example for other French artists.  Poussin’s characteristic of combining erudition and sensibility in a poetic way is regarded as typically French, and Giovanni Pietro Bellori, his first biographer, remarked that France was his mother and Italy his teacher.  Poussin moved to Italy in 1624; he studied Roman monuments and statues but also visited Florence and Venice.  He sketched and measured Roman statues and friezes and examined the works of the Renaissance masters, especially Raphael and Titian but also Guido Reni and Giovanni Bellini.  Italian Renaissance painters were deeply influenced by antiquities as well.  In their careful constructions, their figures and architecture were not only inspired by the classical artworks in the juxtaposition of the forms but are also meant to express harmony in the use of colours.  The contrast between light and shadow (lumen et umbra) is meant to convey volume in 2D dimensions or on flat surfaces and give the illusion of depth.  The artist was therefore seen as a creator who had similar powers to God (the Summus Artifex) and formed an imaginary world that referred to the narratives of the ancient myths and to biblical stories which were considered the supreme examples for humanity.  Their organised and well-balanced compositions were the artistic response to the unpredictability of reality.

When Poussin arrived in Rome, he had a difficult start and also had health problems, but then he found wealthy patrons such as Cardinal Francesco Barberini, the nephew of Pope Urban VIII, and the antiquarian and philosopher Cassiano dal Pozzo.  He received a large number of commissions on both religious and mythological subjects.  His paintings are modest in size and he did not decorate churches or palaces.  Nevertheless, he became an expert in antiquities and was considered erudite but was also aware of the precarious condition of humanity, a concept that was developed during the period of the Reformation and Counter-Reformation.  Thus, his complex narratives not only depict the apparently static and harmonious world of the ancients but also express the unbalanced nature of our world in the dynamic movement of the figures.  The exhibition at the National Gallery emphasises this aspect, which is probably the most interesting trait of Poussin’s work.

The dance is indeed the peculiarity that depicts the movement in the drunken revels and bacchanals in which the fleeting limbs and floating draperies visualise the dynamic quality of the compositions.  This effect is particularly present in the three central pieces of the exhibition: ‘The Triumph of Pan’, The Triumph of Silenus’ and ‘The Triumph of Bacchus’, executed between 1635 and 1636.  They were commissioned by Cardinal de Richelieu, chief minister under Louis XIII, for his new castle.  The pictures convey the sensuality and even eroticism of the scenes represented.  ‘The Triumph of Bacchus’ is a triumphant procession in which the god of wine sits on a chariot in a pose that is reminiscent of a Roman hero or emperor, and he is preceded and celebrated by his followers and companions.  The other two paintings reveal the unrestrained abandonment of the participants to pleasures and revelries in the woodlands, the home of Pan and his friend Silenus.  The figures in the pictures were inspired by the ‘Borghese Dancers’, a Roman frieze from the 2nd century BCE that belonged to Scipione Borghese at the time, and by the ‘Borghese Vase’ (1st century BCE), which are both on display at the exhibition.  The bodies of the actors and their moving limbs and floating clothes communicate the sensuality of the dance and their inebriated involvement.  Poussin therefore quotes the ancient works but also interprets them, studying the figures from different angles and always changing their position.  To achieve this effect, he prepared wax statuettes that he modelled and draped then positioned in a box open on one side, a stage set of sorts that he called the ‘great machine’.  None of the original figurines survived but this practice is confirmed by fellow painters who saw him drawing his sketches from the wax models in different positions and in different lights.  A video at the exhibition and a reproduction of some wax figurines from Poussin’s sketches explain how he worked.  His practices were both analytical and formal in a combination of poetry and reason that aspired to harmony.

His palette was not very wide; he used two or three shades of each colour and did not apply dark shades for shadows but preferred the contrast between cold and warm colours such as blue and red.  Besides quoting from antiquities, Greek and Roman mythology and biblical stories, he also referred to music composers in his stories, such as Claudio Monteverdi, and popular poets of the time, such as Giambattista Marino.  They drew their inspiration from classics as Poussin did and interpreted them according to the sensibility of the time, for example highlighting the sufferings of love but in a graceful and harmonious way.

The exhibition also displays other works that show movement and dance, such as ‘Bacchus and Ariadne’, influenced by Titian’s painting, ‘The Realm of Flora’ and ‘The Adoration of the Golden Calf’.  The final piece of the exhibition, ‘A Dance to the Music of Time’ from the Wallace Collection, is perhaps one of his most interesting pictures.  It depicts four dancers interlaced in a circle representing the four seasons but also the changing of the condition of humanity, from poverty, which leads to work, wealth and finally luxury, to pleasure, which might lead back to poverty, and the cycle starts again.  The four women are characterised by their clothes and headdresses in the different stages.  In the sky, the chariot of Helios, the sun god, and the Hours symbolise the passing of time, connecting once more movement to the flowing of life and to our unstable state in an Arcadian setting; on the left side, the two-faced statue of Janus emphasises transition, duplicity and change.  In an apparently ordered nature, the ambiguous message of Poussin’s work confirms the importance of the ancients and the artist as an artificer and creator who depicts stories that are reassuring and poetic but that also subtly reveal the uncertainty and wild side of humanity in a controlled setting.