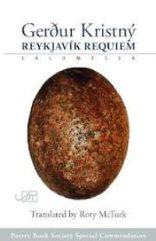 Whenever I read poetry in translation I think of Hughes; and a particular observation of his springs to mind whenever I read Kristný’s work; ‘I think it was Milosz, the Polish poet, who when he lay in a doorway and watched the bullets lifting the cobbles out of the street beside him realised that most poetry is not equipped for life in a world where people actually die. But some is.’

Gerður Kristný is an Icelandic writer who has authored over twenty books of fiction and non-fiction, children’s books and poetry; winning the Icelandic Journalism Award and the Icelandic Literature Prize. Reykjavik Requiem arises out of a true story edited journalistically by Kristný, which received criticism at the time of publication. Now, societal acceptance concedes that this same account of abuse has a right to be told by Kristný in the public realm years later in the genre of poetry.

Reykjavik Requiem is the third in a trilogy of sequences by the poet, the first being Bloodhoof (2012) and the second Drápa (2018). All these volumes are published by Todmorden’s Arc Publications. Each book tracks a woman’s destiny and fate with biting compassion, homage and respect. The original voice of the abused was silenced by culture and language and the original reporting received a reprimand by an ethics committee. Therefore, Kristný places the right of articulation at the heart of the poem; interspersing her work with words particular to some languages and not others in acknowledgment of the impossibility of communication when there are simply no words.

Rory McTurk, Emeritus Professor of Icelandic Studies at the University of Leeds, translates this sequence of Kristný’s books. An approximate guide to Icelandic pronunciation is included with the text should readers wish to closely compare the translation with the original in this bilingual edition.

‘Reykjavik Requiem’ is a trenchant, long, narrative poem which is divided into five sections. Each section is written in sparse form using short stanzas. Brevity completely complements the theme of this work, which is exquisitely incisive and succinct, pared and honed with razor-sharp imagery. White space on each page allowed my mind to wander about each turn of events at the turning of each page, acutely aware that the speaker of this poem did not have the luxury of a voice. Her fate is revealed necessarily quickly in the text, like catching breath in the cold. It is Christmas:

This compelling book is spellbinding, and I read all of it in one evening initially, completely immersed in its essential content. On subsequent slower readings we discover more of what the poet says about language and its limitations. For instance the second section’s prelude tells the reader that, in Persian,

This poem continues hauntingly, softly stirring and awaking the dead in a shocking and arresting way; one verse explains that  ‘Ása has a leather strap’ (where Ása is presumed to be the name of an abuser):

The speaker, gently keening, describes the burial-cairn and then the bitterest of tastes. Kristný’s imagery never fails to cut deeply:

We learn that Finns have … ‘no word for the cold that chills us when/friends choose to die.’ The poet writes of ascension and revenge as truths are relentlessly told:

Reykjavik Requiem is a determined and vigorous book. Gerður Kristný unfurls tragedy with reverent energy and a quest for justice. This title completes a trilogy which has settled securely on my shelf. Kristný: