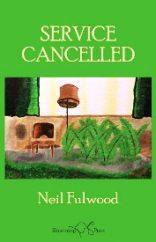 Many of us have probably read quite a few lockdown poems by now. Some of us may even have written one or two. To be honest, however, I have found many of them to be rather samey: perhaps it’s unreasonable to expect much variety in people’s reactions to confinement. I’m pleased to say, however, that the lockdown poems in the first section of Neil Fulwood’s new collection Service Cancelled are definitely out of the ordinary. Fulwood’s observations of his semi-deserted neighbourhood were composed while he listened to Bach’s Sacred Cantatas; and this introduces a transcendental element which informs, illuminates and transforms the everyday scenes he describes. Bach’s subtitles for each cantata frequently invoke God and always point beyond the mundane. This does not cause the poems to become falsely optimistic or detached from commonplace reality: instead Fulwood produces a both/and experience for his readers which acknowledges that the housing estate is bleak and its residents have little freedom yet also invokes a higher state of being that is not entirely out of imaginative reach. Although he is in the same restricted circumstances as his neighbours, Fulwood seems to be released by the music so he can reappraise the situation with compassion or rueful irony or sometimes righteous anger. (I am somewhat reminded of the sequence “Vingt Regards” by Michael Symmons Roberts which appears in his book Ransom and is inspired by the music of Olivier Messiaen. A good part of its effectiveness lies in its exploitation of unexpected connections and interactions between seemingly mismatched elements.)

The first poem in the “Sacred Cantatas” sequence begins in lugubrious tones with the observation ‘The view is losing the charm it never had’. It continuous in a similar vein for two and a half quatrains (using delicate half rhymes) and describes a Midlands housing estate where ‘the lawn’s gone native’ and ‘a neighbour’s car leaks oil’. So far so dismal: but then, and only then, we learn that there is music playing in the background: Bach’s Gott der Vaterwohn uns bei (BWV 317). The poem’s final line repeats that title in English as ’Stay with us, God the Father’, pronouncing the words as a kind of blessing – or perhaps only a faint hope of blessing – upon the poet and his neighbours . This utterly changes the tone of the poem and by extension alters the background against which we will read everything that follows.

The second poem is based on the cantata BWV 108 ‘it is good that I remain where I am’ which makes, of course, a suitable motto of acceptance for a time when pubs, restaurants, bookshops and cinemas are shut anyway. Fulwood is to be congratulated on resisting the easy and obvious ploy of making this the first poem in the sequence.

Many of the eighteen pieces retain the reverential tone of the first poem. Thus “How beautifully shines the morning star” speaks eloquently of the dawn view from a window being welcoming ‘even though the world is boundaried / by the lasso-throw of a postcode area.’ Similarly “God you are praised in the stillness” is a poem of quiet gratitude. It is addressed to a friend who – after the poet’s ‘nth day / stood at the window’ – sent pictures of more spacious prospects like ‘a dead calm stretch of the Grantham Canal, /skyline inverted on its glass-still surface’. But Fulwood can also make more down-to-earth observations which contrast aptly with Bach’s ethereal titles. Thus we are reminded that ‘The heavens declare the glory of God’ – but we can only notice them doing so because ‘The police helicopter must be busy elsewhere’. Elsewhere Fulwood admits that one possible answer to the big existential question ‘where shall I find refuge’ could lie down the ‘rabbit hole of the internet’ with its offerings of ‘A cat video. / A monkey video. Baby pandas on a slide.’

Fulwood mostly alternates between employing the cantata titles as a sort of punch line in the final stanza or as an opening declaration. BWV 156 ‘I am standing with one foot in the grave’ is an example of the latter which is particularly fitting for a poem written during a pandemic!  One exception is Sie werden euch in den Bann tun (They will put you under banishment) which becomes a prompt for a poem about taking an illicit trip in the car, prudently ‘armed with an excuse for driving’ that is presumably better than the truth that a fortnight of lockdown has the poet ‘climbing the walls’. Here the cantata title appears only obliquely in an enigmatic final line which likens the closed businesses to ‘the synagogues they have put you out of’.

I realise that I am in danger of quoting from the entire sequence and so I will leave the rest of these satisfying and well-crafted poems for other readers to discover. The second half of the book is is entitled “These Empty Streets” and also contains lockdown poems which are typically longer and looser than the tightly worked cantata poems (which all have twelve lines or fewer). This section includes hints on how to estimate and maintain the regulation two-metre social distance from other walkers and on how to keep calm and carry on if others fail to take the same care. There are also poems extolling the benefits of alcohol in helping one through the days – plus a comment on the consequences of accepting a little too much help of this nature (‘Drunk and in charge / of an iPad…’). These are all enjoyable poems and “Locked Down Sestina” deserves a particular mention because it wears its six end words very lightly – something that can’t be said of every example of this verse form. In particular it contains the comment

This sentiment echoes the final poem in the “Sacred Cantatas” sequence which gratefully likens to ‘keepers of the eternal fire’ the many key workers ‘who our leaders snubbed as unskilled’ but who effectively kept the country going during the lockdowns.

The fact that I have wanted to squeeze in just one more quote from “Sacred Cantatas” reflects my impression that this section is very much the stronger part of the book. “These Empty Streets” would, I think, have worked better as a prelude to “Sacred Cantatas”; but, coming where it does, it seems not quite to live up to the high standard that has already been set. Had I been editing this book I would have suggested swapping the two halves. But that, in the end, is a pretty small quibble about this short but very engaging and accomplished collection.