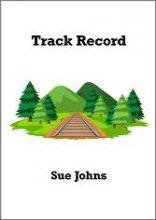 Commuter and long distance traveller, Sue Johns gives us the highs and lows of train journeys now and in the past, in the UK and around the world. All this is in just twenty neatly crafted poems. Her sense of moral justice is always there in the different life experiences of the affluent and the working class and the personae she imagines.

She starts with the beginnings of train travel and the building of railways. In ‘Flight’ the compensated Cheshire landowners are contrasted with the agricultural workers who fled the land: ‘milking at first light/ the inadequate plough,/ poaching in the dank woods’ for the dangerous and dehumanising factories of Manchester. ‘Nature Poets’ takes a swipe at Wordsworth & Co who sought to keep the railways and their passengers out of the Lake District. She turns the tables for our present nature poets though, imagining a kind welcome for them to today’s cities.

There are trains that go to market and to the seaside too. ‘Day Tripper’ depicts two Victorian factory girls and one of their brothers on a day out in Brighton, travelling third class in an open carriage and spending ‘a day and a half’s pay’ for the privilege. They bring their own food and drink, and, not being able to swim, can only watch the well-off in their bathing machines, eating cod, and going first class with foot warmers. It is her keen eye for these kinds of details that gives Johns’ poems fluency and colour.

Three poems deal with different scenarios for jumping from a train. In ‘A Lesson from the Dust Bowl’ a destitute Oklahoma farmer shares his hard won knowledge of such: ‘take a wire and horseshoe to keep the doors open…leave in spring or autumn…take the lemons fate gave you and beg a little salt’. ‘One Under’ is a visceral telling of the consequences of a fatality on the line, ending with horror: ‘we’ll be going nowhere/ until they find the head.’ And ‘When I say Jump!’ is voiced by a child unknowingly taken to the tracks by her depressed mother: ‘she must take me with her/ I am too precious to be left behind.’

History comes in the form of the ‘airless dark’ inside a Nazi transport and in a very affecting Burma railroad poem in ‘A Life for Every Sleeper’, which is both shocking (‘ulcers at very bone’) and beautiful (‘frangipanis scent the night’), achieving this effect in a series of short descriptive phrases.

I especially enjoyed autobiographical poems like ‘Making Up For It’ where Johns applies her make up on the way to work by train: ‘A steady hand is required to define the eye.’ And the title poem, which may or may not be personal to Johns, is a nicely controlled revenge tale, balancing anger with a searing wit. She imagines channelling Agatha Christie’s ‘Murder on the Orient Express’:

It finishes with a gleeful scattering of torn photographs from a train window ‘accompanied/ by a girlish laugh and a splash of cheap, red wine.’

There’s much more to be done with this topic, I’m sure, but the limitations of a pamphlet are what they are, and Johns has done well to give us so much more than a glimpse of the possibilities with her careful and observant words.