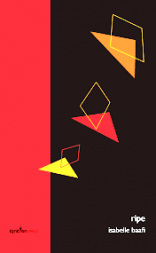 There’s a hunger at the heart of Isabelle Baafi’s Ripe: a relationship between a father and daughter is explored through baked beans; children know the dark is ‘always hungry’; mothers worry about providing for their children and about being good enough. The poems also explore what roots us, how our identities are formed and what informs them.

A short sequence “Gravida”, which is concerned with a pregnancy and eventual birth of a baby by c-section, is followed by “PG Tips” which begins ‘Because she came from me, they all conclude I can be trusted’ and ends,

A lot is going on here. ‘The wheels go round’ echoes a nursery rhyme. The mother is looking for signs that life with a baby gets easier. She’s suspicious of the midwife whose role is to check on both mother and baby, fearing that the midwife could write up a negative report if the wrong things are said. This leads the mother to pretend to be OK and not ask for help. The mother projects, she is drowning. Biting the teabag is an act of defiance. She wants support, a break and reassurance but doesn’t trust the midwife to give it to her, so imagines some random chance will assist her instead. The midwife seems to be oblivious to the dynamics. A working class mother, wary of judgement, turns away from the system of support that a middle class mother with a sense of entitlement would simply demand.

Although the races of the midwife and new mother are not identified in “PG Tips”, it could be read as a black mother and white midwife which would give the mother another reason to be mistrustful of the midwife’s visits. Another poem “paint my shadow white”, does touch on race, although not explicitly:

Children have an understandable fear of the dark: it conceals and makes a familiar room unfamiliar. By extension, associations with the dark are also something to be feared, as is the unfamiliar. The poem’s children see dark in adults’ eyes and interpret it as something to fear; and in this way they learn that people considered ‘other’ or not like them are to be feared. The brown sugar melts into the tea, changing from solid to liquid to merge with the tea. So the poem’s narrator feels that parts of herself are lost in adapting to fit in and become part of the society around her. Unfortunately, shadows can’t be brightened. The associations with darkness and negativity can’t be shrugged off.

“Caul” returns to images of pregnancy, a caul being the amniotic membrane that protects a baby,

Here the caul becomes the protective barrier people create to prevent themselves from being harmed. Keeping a distance or boundary between us and people with malicious intent is useful. But keeping the same boundary between us and someone we want to love and who wants to love us, is destructive. We need to learn to trust and breach the caul for the right people.

The poems in Ripe have been crafted with care. Thought has been given to the space they occupy on the page; some are shaped or use space so that it becomes part of the poem. They explore heritage and identity though relationships of mother to baby and ways in which a child negotiates its independence. Colours feature – particularly black and bruise colours like blue, purple and grey – which appear in ripe fruit or mould, or blue make-up or violet glitter. And the colours are reinforced by shades and shadows. White appears too, as rice, ash, dust, teeth, moonlight, snow, eyes and milk. This use of colour underlines the sense of marginalisation. Isabelle Baafi’s subjects may be those pushed to edges of society but her poems are multi-layered and reward re-reading, giving her marginalised subjects centre stage. The slenderness of the volume belies the weight of the words within.