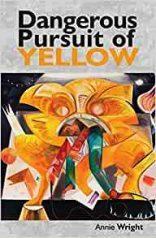 Poetry review – DANGEROUS PURSUIT OF YELLOW: Thomas Ovans gets to grips with a collection of challenging and colourful poems by Annie Wright

One of the many consequences of the Covid-19 pandemic is that new books which might have been expected to get promoted via readings and reviews during 2020 have instead gone relatively uncelebrated. One of these is Annie Wright’s 2019 collection Dangerous Pursuit of Yellow and for me to discuss it now feels like a case of better late than never.

The cover picture, “Lion Eating Its Tamer” by artist Dana Schutz, neatly hints at a running theme of the book – namely the unexpectedly hazardous properties of plants, minerals and chemicals used in the production of materials with the colour yellow. Each section of the book begins with a poem about one particular hue – Indian Yellow, Ochre, Saffron and so on. My enjoyment of some of these would, I think, have been enhanced by a few notes so that the poetically effective opening to “Ochre”

left me wanting the sort of background information that a poet might have offered during a reading. Only in the case of “Gamboge Genuine” is there a footnote saying that Gamboge is collected in areas of Cambodia where there are still uncleared minefields – which accounts for ‘how many suitors have lost / a hand, an arm, a leg’.

One of the best of these signature pieces is the title poem which opens the collection. This is a powerful and extended prose poem in a single sentence which describes (without naming him) Vincent Van Gogh’s ‘prolonged use of absinthe’. This could have ‘manifested jaundiced visions’ and other symptoms sending him ‘staggering into fields under the fiercest suns’ and needing ‘ more tubes of lemon chrome’ because he is ‘addicted to its vibrancy, outrageous hue’. Ultimately he is able ‘to see only stil-de-grain and sulphurous spots’.

Fortunately, Wright is more circumspect in her pursuit of yellow and doesn’t attempt to force a primary colour into every poem. The related topics of painters and painting appear via a number of ekphrastic pieces including one based on Freda Kahlo’s “Wounded Deer” 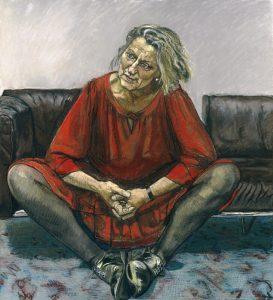 Another poem examines a portrait of Germaine Greer by Paula Rego, homing in on an often overlooked feature: ‘It’s the feet she wanted me to notice…’ before summing up the subject as 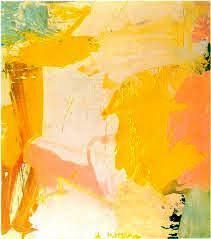 Wright also takes on the more difficult task of responding to an abstract piece: Willem de Kooning’s “Rosy Fingered Dawn at Louse Point”. Perhaps prompted by de Kooning’s own remark that ‘there is Woman in the landscape’, Wright imagines a woman who

A more deadly yellow is present in “Aycliffe Angels” a nine-poem sequence about women workers in a munitions factory during World War Two where the explosive materials stain the skin of those who handle them. ‘Well blow me, if it isn’t a pair of Aycliffe canaries!’ laughs a man standing behind the poem’s narrator in a cinema queue. The women can sometimes do some teasing of their own, however, as when, on the train going home, they outnumber ‘one young lad, green as a willow’ and tease him by ‘singing and blowing big pouty kisses’. The factory work is dangerous of course and the poems are quite graphic about injuries and deaths caused by explosions. Outsiders don’t always grasp the dangers and may unintentionally trivialise them:

For me, “Aycliffe Angels” is one of the strongest parts of the collection. But Wright’s knack for keen observation of the elements of everyday life also shows through in many other poems – for instance in the helter-skelter impressions of family holidays in “Sussex Summers” with ‘gutsy breezes / upskittling blankets and picnic box’. “The Jug My Mother Gave Me” very appropriately has ‘the shape / of a woman, handle a bent arm on hip’. “Relapse” captures the sense of what often remains unspoken in the presence of illness: ‘No one’s saying much to him for fear // of opening what cannot be contained’. There’s a grim reminder that it’s only ‘when he’s gone // to the doctor there must come time for the word /no one utters, but everyone’s heard’. (And, yes, that word/heard is part of a neat rhyming scheme running through the poem.)

As well as being able to capture authentic speech, Wright can also be inventive in her phraseology. Of an elderly woman needing to be moved to sheltered accommodation she says, hauntingly, ‘cogs of her rusty mind ratchet oddly’. A small bird, stunned by flying into a window has ‘eyes two Os of surprise’. And in an orchard we find ‘wasps lurching in and out / of boozy holes’.

This is a very varied collection both in terms of form and content and I can give only a few examples. However one more very striking and bold poem deserves mention.  “Prayers after La Prière” is a two-part poem which responds to a photo by Man Ray depicting a naked woman praying, taken from behind and giving a very intimate point of view. The first part of the poem seems to read the mind of the model in the photo – probably Lee Miller – and begins ‘Afterwards she finds herself praying / hoping she has got away with it’. In fact she fears that, by letting herself be so exposed to the photographer’s camera, a line has been drawn between her and him that ‘she can never re-cross’. The second part then echoes and mirrors elements from the first  in order to imagine similar feelings of invaded privacy experienced by a woman patient who learns she must undergo a particularly intrusive form of surgery.

Dangerous Pursuit of Yellow is a collection that has grown on me as I have read and re-read it. At first I felt it to be rather uneven; but some of the poems that initially seemed obscure or a little insubstantial have revealed more of themselves on subsequent reading. Furthermore the poems also began to inform one another through recurring themes and images. This is a book that amply rewards the careful reader.