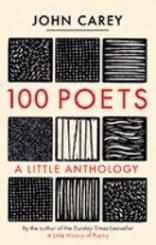 100 POETS. A LITTLE ANTHOLOGY: Kevin Saving considers the selections made and not made for a new anthology compiled by John Carey

As companion piece to last year’s instant classic, A Little History of Poetry, this anthology (from the Greek Anthologia originally meaning ‘a collection of flowers’) has set itself a hard act to follow. Professor John Carey, doyen of The Sunday Times reviewers and an acknowledged expert in his field of English literary history, has “chosen 100 poets, mostly but not exclusively English and American, who seem [to him] outstanding. Some of them [represented] by a single work, [others by a selection] from the whole range of their poetic output”. He adds a personal commentary to each of these choices, whole poems or fragments, 215 in all.

Of the more notable poets mentioned in the previous volume, Betjeman, Berryman, Brodsky, Goethe, Lorca, (Robert) Lowell, Marianne Moore, Neruda, Pushkin, Stevie Smith, Wallace Stevens, Tagore and Walcott (a quartet of Nobels, several other laureates and more than a few ‘National Treasures’) have failed to make it into this one. Poets of the stature of Pasternak and Cavafy could find no place in either book. No living author has been considered. Of those are are included, Edmund Spenser penned a despicable paper, A Brief Note of Ireland (1598) which argued “Great force must be the instrument, but famine must be the mean[s], for till Ireland be famished it cannot be subdued”. He was also a consummate royal toady. George Gordon, Lord Byron, had incestuous relations with his half-sister and, almost certainly, non-consensually sodomised his own wife. William Cowper was a substance misuser as was Samuel Taylor Coleridge. G.K.Chesterton and Ezra Pound were anti-Semites while Edgar Allan Poe was an unrepentant advocate for the institution of slavery. Even poor John Clare turns out to have been capable of domestic abuse, which only goes to show how – to adapt Winston Churchill’s dictum (on warfare) to literature – “you don’t have to be nice, you only have to” write!

Carey’s first five selections (Homer, Sappho, Virgil, Horace and Ovid) are uncontroversial yet he is able to deploy a wide range of interesting translations. After several Anglo-Saxon and Middle-English poets (often translated by Carey himself with his customary thoughtfulness) he moves through the Tudors – though now displaying a scholar’s insistence upon retaining the original spelling, which can feel a tad off-putting. ‘Vrgently’ (for urgently), ‘tymes’ (for times) or ‘powre’ (for pour) make the modern reader perform a transient, detached scan wholly inimical to mood. For me, the finest section of this anthology is found towards its centre, with numerous unsuspected or half-remembered treasures from the early seventeenth through to the mid-eighteenth centuries, frequently accompanied by a trademark exposition both lucid and insightful. Entries such as those on Ben Jonson, Milton (as always!), Dryden, Pope, Samuel Johnson, Oliver Goldsmith and the little-known Stephen Duck are especially illuminating and entice either re-reading or – as with Duck – further exploration. Carey is very sound on both the Romantics and the Victorians but his commentaries understandably grow shorter and perhaps ever so slightly less incisive as we reach more modern times. He never defaults from high standards of intelligence and intelligibility, whilst his prose-style can feel refreshingly tart on the palate (as when he notes of Algernon Charles Swinburne’s ‘The Leper’) “Necrophilia is clearly suggested, an aberration not otherwise present in Swinburne’s stock of deviant practices.” This is currently my favourite-ever sentence of English literary criticism – especially so in the knowledge that it will not have been offered prior to a deep familiarity with the entirety of Swinburne’s oeuvre coupled with a formidable knowledge of his biographical minutiae. Nice one, professor.

A few problems do emerge, however. ‘Calling out’ Langston Hughes (the finest Black poet of his generation) might seem both politically inadvisable and anachronistic, given that he died in 1967. But the following lines from his ‘A Southern Mammy Sings’

step worryingly close to racism. Professor Carey could have chosen several other, in my opinion better, poems from this same writer (such as ‘The Negro Speaks of Rivers’ or ‘I, Too’) but he didn’t. He clearly wishes to expand the canon and this piece – which references a lynching – is definitely forthright, skilful and powerful and may likely do just that. But could the present reviewer (of White, British ancestry) publish verses today which include the lines “sometimes I think that Black folks/ Just ain’t got no heart”? Answer: No ma’m! ALL racial generalisations are, by their very nature, aberrant and, on the human register, would be more appropriately viewed as ‘Silly’ well before they get to be judged as ‘Invidious’. Sorry, Langston.

Striking another discordant gong, I believe it possible that professor Carey – possibly in a well-intentioned desire to be more ‘proportionate’ – may well have over-represented women. Twelve percent doesn’t appear much like ‘over-representation’ though the inclusion here of names such as Lois Clark, Helene Johnson or May Wedderburn Cannan might conceivably occasion only a collective scratching of heads. Of Cannan I can only hope that she lived long enough to see her fine poem, ‘Rouen’, temporarily rescued from obscurity by Philip Larkin’s (and Monica Jones’) Oxford Book of Twentieth-Century Verse. She died in 1973, the year of the latter’s publication. I happen to believe that the ‘moderns’, Christina Rossetti, Charlotte Mew (perhaps a bit of a ‘one-hit-wonder’), Emily Dickinson and Elizabeth Bishop – all represented here – wrote work every bit as accomplished as any by their male counterparts. As to why this isolated but eminent sorority isn’t much larger, I really have no idea – save that, historically, it was much harder for girls to obtain the requisite education. And, when they did, much of their subsequent lives were probably spent clearing up the messes left behind by their spoilt fathers/husbands/sons.

On the subject of ‘one-hit-wonders’ (awful phrase!) why hasn’t Chidiock Tichborne’s wonderful elegy ‘Written The Night Before His Execution’ been included here when Lois Clark’s ‘Picture From The Blitz’ (good, though not outstanding – and her sole surviving poem) was? Similarly, why not Clare Harner Lyon’s ‘Immortality’ (aka ‘Do Not Stand At My Grave And Weep’)? Or Robert Southey’s ‘After Blenheim’? (I can forgive Southey almost all his subsequent twaddle for this one gem which dared to adopt a totally new perspective on what was after all ‘a famous victory’). Finally, I personally would have had to have found space for Vachel Lindsay’s ‘The Leaden-eyed’ (a far greater poem than anything T.S.Eliot ever achieved) but, then, One Hundred is a very finite number.

All quibbles aside, John Carey is fully entitled to select whichever poems he pleases and I would defend – if not to the death, at least to the extent of a black-eye – his right to do so. This is a man who has probably read more deeply and reviewed more widely than any contemporary. He is an ornament to disinterested, non-elitist scholarship and provides a modest voice of sanity within an increasingly fractious discipline. 100 Poets stands jointly with Nicholas Albany’s (1997) Poem For The Day as one of the two best poetry anthologies published in my lifetime: a cherishable bouquet from this quite irreplaceable man of letters.