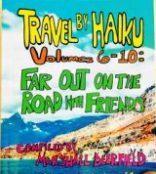 Travel by Haiku is actually a series. Marshall Deerfield published the first collection, Travel by Haiku: Volume 1-5, Still Trippin’ Across the States, in 2016. The current collection, which includes Volume 6 -10, comes five years later and is just as inspiring in its depiction of landscape and wilderness, its sense of adventure, its attitude of awe.

The haiku in this volume were compiled during three different road trips through the American west, between 2015 and 2016. Deerfield (aka, Marshall James Kavanaugh) and three different sets of companions collaborated one haiku line after the next to capture their experience on these journeys. In Volume 6, Deerfield and Augustus Depenbrock travel through the desert area of West Texas, amid ranchers and hippies (“Black scars in pink sand / carry people across land / Cadillac country.”), and in Volume 8, Deerfield is joined by Shane Donnelly and Tara Lynn Faith Williamson on a month-long jaunt up the California coast, LA to Seattle. Volume 7 (“Scavenger Poets Tell Their Tales”) is a kind of glue that connects 6 and 8 in vivid, descriptive prose, often waxing philosophical. In Volumes 9 and 10, he’s accompanied by Stephanie Beattie and Cameron Christopher Stuart on a “deep dive” in the Rockies, from Taos, New Mexico, to Glacier National Park in Montana. In short, a lot of territory is covered, and the settings could not be more varied.

Make no mistake, this is essentially a travel book. Think of Ken Kesey and his Merry Pranksters in Tom Wolfe’s The Electric Kool Aid Acid Test; think Kerouac and Cassady crisscrossing the country in On the Road. Think Steinbeck and Travels with Charley. Think, too, of Matsuo Basho, the 17th century Japanese poet, inventor of the haiku as a form separate from renga, and likewise a travel-writer. As Andrew Galati writes in his enthusiastic Introduction, “I stuffed my backpack and guitar case in among the other belongings crowding the backseat: travel bags, a suitcase, a typewriter….” It’s spontaneous and planned at the same time. They’re all open to discovery. “It’s about the trees, valleys, mountains, moon and clouds,” he writes. “It’s about the body in movement and the body at rest. It’s about the wonder of imagination as it merges with the mystery of nature.”

Haiku is the perfect form for this travelogue. The haiku, a short form of three lines, 5 syllables in the first and third lines and 7 in the middle, presenting simple, vivid pictures, without commentary, offers a kind of direct apprehension of reality. For instance, in the west Texas sky:

These clear, simple images show us all we need to know about the desert, its barrenness, the winged wildlife that inhabits the region, predatory and a little sinister.

The haiku from the Pacific coast volume are far different but no less succinct and imagistic:

Sometimes the haiku are deeply philosophical capturing the essential consciousness of the travelers:

Indeed, these travelers exist in The Now, experiencing their surroundings through the immediacy of the senses, the sights, the sounds, the smells, all without judgment.

High up in the mountains, the experience becomes downright beatific, with references to shamans and Zen. Take this beauty:

Sometimes the haiku are downright sexy in the breathtaking rapture of their pristine, natural surroundings!

The journeys are for their own sake, an end to themselves, but the project of composing haiku to hold a mirror up to that experience, though noble, is doomed. To sum the whole experience up, toward the end Deerfield reflects:

They’ve done their best to capture the experience, but in the end have to concede that the world is essentially ineffable. But they sure make a great, vivid effort to capture the beauty and the ecstasy of being alive. Travel by Haiku is a very satisfying, thought-provoking and above all hopeful and affirmative collection.