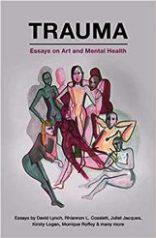 In these uncertain times of isolation, fear and loss due to the Covid-19 pandemic it feels crucial to read this extensive anthology of essays about art and mental health. This book collates over thirty essays of personal and political perspectives on trauma from anxiety, loss, relationship dysfunction, abuse and addiction, to name a few, alongside exploring ways and means of trauma recovery via the arts.

Trauma is a slippery subject for it can elude us – we argue over what it is, whose trauma is worse, we develop hierarchies of trauma and speak of a pervading trauma that others may deem miniscule in light of the events they themselves have endured. Trauma is a complex topic but a necessary one to unravel because it cannot be seen – it lives in our brains and our hearts, it re-plays and worries at us, it shapes the way we respond but it cannot be heard unless someone is brave enough to give it words. This writers in this anthology have boldly and collaboratively done that and in doing so, have also offered up some creative tools for moving towards resolution and recovery using the power of art.

Rowena Macdonald’s ‘Quite Collected…Meanwhile’ is a deftly structured and harrowing piece which juxtaposes one woman’s stream of consciousness during an anxiety relapse against the polished veneer of her middle-class life in London. Third-person is used to striking effect as Macdonald colours in the busy urban lifestyle of a working mother: ‘…she does not look out of place among the other locals walking at a purposeful pace, with recyclable cups of coffee and phones in hand’. And yet, on the left side of page, the rhythm of a panic attack rises: ‘not enough sleep 12pm to 5am onetwothreefourfive only five hours eightminusfiveequalsthree.’ The way the brain flits during panic is artistically shaped out on page. Macdonald uses white space to exhibit the inability to slow the brain and articulate during anxiety: when there feels there’s no room to exhale.

Catherine Taylor’s ‘In the Mean Time’ explores separation anxiety with artistic insight and tenderness. Taylor’s dexterity for moving fluently between the private and political is outstanding in this piece which opens with a forced relationship separation due to the Covid-19 lockdown. From a position of involuntary solitude, Taylor considers the deep and permanent wounds of father hunger with reference to art depicting the trauma of others, namely 1980’s disaster movies and Caroline Salomon’s exhibition of gouache paintings: Life, or Theatre?

We are taken to writing created during forced separations such as Anne Frank’s uncensored diaries and the intolerable horror within the Russian poet Marina Tsvetaeva’s letters to her husband who had been drafted into the Imperial army. Acute pain is studded throughout this piece from the cuckoo clock gifted by Taylor’s father which ‘kept neither the time, nor its temper:’ and the tennis racquet at the foot of Salomon’s bed in her self-portrait, a symbol of a freedom Jews were no longer permitted. Taylor notes the importance of detachment, though, not merely as self-preservation – as a coping mechanism – within trauma, but also as a creative self-discipline necessary for writers.

Susanna Crossman’s powerful hybrid essay ‘The Clown’ explores her role working as a clown therapist with traumatised children in French psychiatric units. Crossman speaks of this aesthetic performance role as a way of building bridges: ‘The painful singularity of an existence is both heard and told. I am here, the clown says, and the child responds, I am here too.’ This clown, though, always loses her red nose, a clown who asks: ‘…How can I be a clown without a nose?’ Identity loss and formation underpin this piece which not only serves up a robust and theoretical framework for recovery but reminds us that following the most atrocious of traumas there is hope: ‘Clown theory states that everyone can find his or her clown.’

In Jude Cook’s ‘Thanks, I’ll Take the Chair’ we find a painfully candid account of step-parental abuse and how this set the path for multiple falls in adolescence, including years of psychoanalytic counselling in early adult life. Cook takes the metaphor for declining the vulnerability of the therapist’s text book chaise-longue and runs with it in a confessional style reflection where wit is never too far away despite the bleakness endured: ‘It was like the set of One Foot in the Grave.’ A stand-out element of Cook’s writing is how he can articulate multitudes of pain in a matter of fact way – no drama despite the drama – and alongside a passion for art which, ultimately, propels the piece forward until the therapist who advises him to do away with the notebooks becomes a mere shadow on the stage. Cook proposes that essentially art is trauma’s saviour: ‘Its alchemy of chaos – its redemption of lost time – its creation of something beautiful where before there was only ugliness, violation and pain made it eternally valid, whether it reached an audience or not.’

‘Endurance: Narcopoetics (Unfinished)’ by Azad Ashim Sharma is one of the few essays in this collection which comes from a perspective of still living within trauma and this lends it vast emotional significance. A beautifully rendered piece which attempts to find answers for bodily addiction, it is a narrative which rushes in pace through periods of erratic tachycardia fuelled by alcohol detox through to the slowness of sobriety, the sudden wanting for speed and colour and the loss of too sharp edges. It tells of one man’s pursuit for anaesthetic in a world too hurtful. Relapse is considered with deep insight – how it isn’t singular, how it might gallop on and on through the longest of times. The nonsensical nature of addiction is held up to the light when Sharma asks: ‘Why do addicts use a poison that they deep down know will fuck them up, like driving off a cliff? I don’t have an answer, neither does The Big Book of Alcoholics Anonymous.’

Anna Vaught’s ‘In Order to Live’ shows how a life-long obsession with reading literature and memorising stories has taken her through nervous breakdowns and the relentless rhythm played out from childhood abuse. In childhood Vaught sought safety in the ritual of the act of reading: ‘I think, looking back, that I savoured scansion or the weight of a line for its mnemonic qualities and the comfort that avoided.’ Reading aloud is presented as a safe place to go, as medicine, as magic and not merely the metre in the words but the layout on the page, the weight of the pause, the spaces:’ I also know textual variants between quarto and folio texts because I was interested in the gaps, the changes between lines; grace notes, elisions, ellipses. Does that make any sense to you?’ And it does. It really does.

Vaught uses a stream of consciousness in the first person to show mental health relapse. At moments of crisis Vaught fuses the present tense with memorised quotes and scenes from books, fragments which accumulate into a glittering mosaic of speed and movement. Change in pace and focus powerfully reveals how the internal monologue feels at the point of crisis: ‘…and now I am falling on the helter-skelter and I cannot control this speed – And the old white horse wants to gallop away into a sweet meadow but he cannot: he is mired in shiny white concrete…’ This is an exquisitely written essay which transports to worlds of storytelling and also prompts consideration of the many ways that literature is buoying. Vaught concludes: ‘…But most of all, I read in order to live.’

This is a collection to return to often, a collection that makes readers feel understood. Here are writers excavating the painful terrain of trauma with honesty and artistic insight, work which provides identification with others and proposes creative methods for moving forward.