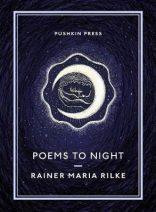 Poetry review – POEMS TO NIGHT: Roger Caldwell reviews a new translation by Will Stone of some of Rilke’s less well-know poems

Rainer Maria Rilke was born in Prague and went to university there but, unlike Kafka (whose work he came to admire), he is not much memorialized there, and the city has no essential part in any of his writings. There is a sense in which Rilke, a German-speaker in Czech lands, was not only without a nation but without a home. His years of maturity were essentially Wanderjahre – mostly within Europe but also extending as far afield as Egypt. The bulk of his work is in German but he also wrote poems in French and managed a handful in (apparently rather bad) Russian. He was dependent on patrons – or, more often, patronesses, aristocratic ladies who were happy to put him up in picturesque surroundings and with whom he had extensive epistolary relationships (the letters form a large part of his oeuvre).

It is easy to see why some are impatient with Rilke. John Berryman described him outright as “a jerk” whilst Auden (who had nonetheless drawn heavily on his work) ridiculed him as “the Santa Claus of loneliness” and declared his work to be “false and unreal”. Certainly we see little in his poetry of the day-to-day empirical world: there are no more buses or trams in his poems than there are in those of Yeats. The protagonist of his poems is usually in the city “solitary / but for myself”. We may be made aware incidentally of “the old men in the hospice, / those strangers who cough gravely in their beds” or a market porter bearing a basket “filled by strangers / from stall to stall”, but for the most part the city streets are populated only by the poet’s self, the shadowy figure of a Beloved, and maybe glimpsed around a corner the figure of an angel.

He tells us that all angels are dreadful (schrecklich), but it is hard to specify what kind of entities they are. So too with the gods who are also invoked. We are admonished for having abandoned them “for mouldering waste”. Yet it seems that their function for us is only that of being there: “Nothing is so mute / as a god’s mouth”. They have “being / and nothing but being”. Here we are inevitably reminded of Heidegger whose work centred on the question of being (Sein) and that mode of being – Dasein or “being there” – which humans are said to have. Heidegger was able to rediscover in the work of Rilke some of his own basic themes (if only in a distorted fashion). But Rilke was no philosopher – he employs no fixed concepts; rather there is a fluidity of significance from poem to poem. We are frequently on the verge of meaning rather than within it, or else faced with a variety of possible meanings without any means of adjudicating between them. Of the poem that Rilke chose as his epitaph (which has been translated as “Rose, oh pure contradiction, delight, / in being no one’s sleep under so many / eyelids”) John Carey wrily remarks that “as usual, it is hard to see what he means”.

It is perhaps surprising that, in days when we are no longer able to credit the poet as magus or seer, Rilke retains his hold on readers. He has frequently been translated, and, for all its extended, sometimes elusive, syntax and obscurity of reference, his poetry often survives translation into English rather better than other German-language poets. That is to say, if Rilke’s poems seem more often to escape the perils of translatorese, this may in part be because in the original Rilke sounds as if he were himself already translating from another language.

Here Will Stone presents us with a translation (apparently for the first time in English) of the sequence of 22 Poems to Night from a notebook which he presented to Rudolf Kassner in 1916, together with other poems and sketches invoking the night – which for Rilke suggests the sublime and the infinite, and possesses potential healing power. In one poem, addressing the night, he says: “Your breath / passed over me, across widening solemn expanses, / your smile entered into me”. Mankind for Rilke is too quick to judge the world, to order it according to its own preconceptions, to impose on it categories alien to it, to prematurely try to hold it fast: “Who has not dragged into his primordial element / fakery, falsified, counterfeit night?” Rather we should learn to be unobtrusive – in the language of the late Heidegger to “let Being be”. In another poem, having gazed at the night in wonder, he feels himself “like a boy, a stranger, at last deemed worthy to join in /yet drops the ball and knows none of the games / in which the others indulge with such ease”.

With writing of such distinction we often forget that what we are reading is a translation. Yet sometimes we may wonder at a phrase. In one poem where Stone has “the calm abatement of the flock” another translator (Stephen Mitchell) has the slightly less odd “the silent comfort of the flock”. Yet, on consulting the original, we find that Stone is in fact closer to Rilke’s German. This is the case too with the ending of the poem where the protagonist prepares the night as a gift to the Beloved. In Mitchell he “treats her to the skies that he has known “; in Stone he “regales her with the deeply felt heavens”. Here again Stone is closer to the German.

The word Welt (world) is an important word for Rilke – as it is for Heidegger who goes so far as to make a verb of it (welten, to world). Here the question is that of the difference between “the world” which is a totality and “world” (without the definite article) which can be experienced quantitatively in that one can have too little or too much of it. In this poem the word “Welt” comes three times in close proximity, referring to the shepherd who in Stone’s version “has only the world” and in Mitchell’s “has only world”. This results in a subtle but (I think) important difference in meaning. The German original has no definite article, and here Mitchell is preferable to Stone in capturing what Rilke is saying. Elsewhere Stone (rightly) drops the definite article. Thus in ‘Night Sky and Fading Star’ the sky is seen as “an excess of world”. In ‘Nocturnal Walk’ we are told that “He who opts for resistance / will not receive world. / And whoever the eternal will slip away from knows too much.” (To know too much for Rilke is to know wrong, attesting to a failure to properly attend to existence.)

This book (which includes some of Rilke’s lesser-known pieces) provides an excellent introduction to Rilke in English, and Will Stone has executed his task with admirable aplomb. Some may nonetheless recoil from Rilkean mystifications. Though he tells us that “even here” (in the “struggling nights”) “where we never / find each other, there are spaces of the angel” we might wonder, perplexed, how quite this is to supposed to enlighten us. But most, I suspect, will find themselves grateful for having entered Rilke’s world, in which there is joy as well as mystery. “Hiersein ist herrlich”, he proclaims: “To be here (on earth) is wonderful”. Those who taste has been whetted will no doubt venture on into the thickets of his major poem-sequences, the Sonnets to Orpheus and the Duino Elegies .

Nero: The Man behind the Myth. British Museum. Review by Carla Scarano. Travel by Haiku