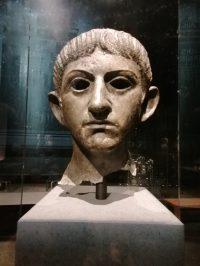 Nero: The Man behind the Myth

Nero, a young Roman emperor and the last ruler of the first dynasty, the Julio-Claudian dynasty, reigned for fourteen years, from AD 54 to AD 68.  His legacy is still controversial and is the subject of this exhibition at the British Museum.  Though Nero presented himself as the successor of Augustus, who had established the principate that ended the Roman Republic after a period of civil war, he is usually depicted as a depraved, mad tyrant who indulged in extravagance and religious persecutions.  According to historians such as Tacitus, Suetonius and Cassius Dio, he ordered the murder of his mother, Agrippina, and the execution of his first wife, Claudia, in AD 62.  His adviser Seneca, a stoic philosopher, was brought to commit suicide together with a number of senators who conspired against him.  He kicked to death his second wife, Poppaea Sabina, and had promiscuous relationships that included a marriage with a castrated man, Sporus.  This image passed down by historians contrasts in part with Nero’s wary and innovative policy that he implemented in Rome and in the provinces of the empire; he used military force, diplomacy or reforms depending on the situation he was dealing with.  He also improved the conditions of low-class people in Rome, gaining their support and approval.  He built new houses, a food market, the Macellum Magnum, baths and an amphitheatre and improved the harbour of Ostia.  The exhibition explores this double legacy inside and beyond the myth that encompasses despotic power as well as Nero’s growing awareness of the subtleties and pitfalls of politics.

Nero ascended to the throne thanks to the marriage between Agrippina and the emperor Claudius, who adopted him.  When he became emperor, aged only sixteen, his mother and his tutor, Seneca, significantly influenced his rule and probably his private life as well.  This brought tensions and disagreements that ended in conspiracies against him.  Nero’s revenge was ruthless and immediate.  Committing suicide was the death usually suggested to his enemies; they were told that if they did not do so, their families would be murdered.

Nero also had to face rebellions in Britain and in Parthia, the present Iran.  The Iceni tribe, guided by Boudicca, were defeated and reforms followed the war.  In Parthia, Nero opted for diplomatic agreements because of the importance and richness of the region, which is near to the Middle East and to Asia, where he intended to expand his power.  In Rome, Nero was popular because he encouraged and funded entertainments and athletic games, such as the Neronia, performed every five years, and he taxed the rich and enjoyed performing with actors.  For these reasons, he alienated aristocrats and the élite, who considered him an enemy and eventually sentenced him to death.  Nero committed suicide on the 9th of June AD 68; he was thirty years old.  A civil war followed his death, with four emperors ruling in only one year until Vespasian, Nero’s general in Judaea, became emperor, starting the Flavian dynasty.

The damnatio memoriae, the official suppression of his memory, that followed Nero’s death involved the accusation that he started the great fire of Rome in AD 64 that burned the city for nine days.  It is reported that he merrily watched the spectacle and blamed the Christians for the calamity.  According to some historians, he started the fire because he needed space for his new palace, the Domus Aurea (Golden House), but he was not even in Rome when the fire began.  However, after the fire he reached the apex of his power; he purged the senate of his enemies and had new buildings constructed, including the Domus Aurea, a lusciously decorated palace that remained unfinished.

After his death, images and statues of him were removed and his story was manipulated.  The objects on display at the exhibition suggest multiple readings; they convey the celebration of this iconic figure as an absolute ruler and a god of sorts as well as his flaws, extravagances and ruthless behaviour.  Nevertheless, Nero was not completely understood, and the condemnation that followed his death was mostly fabricated.  His struggle to have his way while ruling the empire was in constant, increasing, tension with his mother’s intrusions and with the senate; these frictions led to a political fight for power and for control of the resources of the provinces.  His negative reputation is difficult to deconstruct completely but it is interesting to explore how it was created and why it survived for such a long time.

The busts and sculptures on display trace this story of an idealised ruler who was subsequently transformed into a caricature.  Some sculptures have been changed and intend to communicate his cruelty and voluptuousness in the expression and in the hair.  Celebrations of his victories are noted on breastplates and coins; they also illustrate, for example, how the emperor is promoted by the celebration of his reforms and military displays but also reveal the shifting of power after Agrippina’s death, when her portrait disappears from these artefacts.  Therefore, coins were propaganda tools that were used to let people know about the achievements and conquests of the emperors.

The great fire is reconstructed in an interactive video and the world of the theatre is produced in large frescos.  Some precious marbles and silver tableware evoke the luxury of his palaces, and the bust of Vespasian, which is on display at the end of the exhibition, was re-carved from a resemblance of Nero.  This seems to seal his legacy and traces the continuity from the deprecated emperor who was the last in the Julio-Claudian dynasty to the political stability and military successes of the Flavians.  The objects on display and the explanatory captions suggest a reinterpretation of Nero’s legacy that portrays him as a shrewd ruler who fought his battle until the end, sometimes mercilessly, according to the rules of the time but who also enjoyed the pleasures of life resulting from his great power.