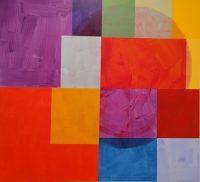 In the wide art world, artists are often inspired by literature and writers write about artworks.  This exhibition focuses on the collaboration between ten internationally known artists and ten renowned poets.  They establish a dialogue in which the written word and the visual work interact, explain each other and expand their perspectives.  The American poet Frank O’Hara celebrated ‘a fine day of seeing’ in his poem ‘Digression on Number 1, 1948’, which refers to a painting by Jackson Pollock and expresses his emotional involvement in the experience of visiting the Museum of Modern Art in New York.  O’Hara’s poem is the perfect introduction to this fascinating exhibition in which different poetic approaches highlight the significance of the artworks, exploring the marks made, the background stories and the materials or techniques used and investigating the subtleties beyond the pieces.  Layers of meaning overlap in the poems similarly to the layers of paint that compose the pictures.  The poets chose the artwork they wanted to write about in a celebration that developed naturally and spontaneously.  Some of the pairs of artists had already collaborated in previous projects, such as Judith Tucker and Harriet Tarlo as well as Mali Morris and Martha Kapos.  Others were new to this kind of experience where figurative and abstract elements mix with examples of traditional and innovative approaches.

An outstanding example of this mix can be seen in the collaboration between the poet Tamar Yoseloff and the multi-media artist Alison Gill.  The artwork, made of metal-plated resin and plaster, is an installation that represents circles of mushrooms where the surface and the area underneath are connected.  The central ring is a negative space where life and death meet and feelings and experiences interconnect.  The close collaboration was inspired by an exhibition on mushrooms at Somerset House.  The fungi are grown in the vaults underneath the House; their roots burrow through the ground, physically connecting them with the busy life on the surface.  This implies both physical sensations and a way of thinking; the latter, in the poem by Yoseloff called ‘Field Companions’, is also in part inspired by the work of the American composer John Cage.  The form of the poem is a mesostic, that is, it has an emboldened text which can be read vertically.  Yoseloff’s poem has four parts, evoking the pattern of a musical composition, and refers to the natural world with its sounds and pauses of silence:

Past and present merge in an apparent uncertainty that nevertheless has some reassuring connections to the ephemeral condition of the body that will disappear in time but will hold its essence in a vapour or in sounds of sorts.

Other compelling examples are the extracts from the film fruit as a verb, 2021 by Michelle Williams Gamaker, which can be viewed in two screen installations.  The work was inspired by the film Black Narcissus by Powell and Pressburger (1947).  The protagonist, Kanchi, embodies the resistance to the British post-colonial indoctrination.  The political statement works at both a physical and a language level where the body and the images are central in their non-binary Queer awareness.  The critique in language is expressed in the reference to the names of the flora and fauna of British woodlands that are taught in school to indigenous pupils.  This fictional activism challenges colonial structures, exposing their incongruencies and re-evaluating indigenous culture:

The connection between the soil and the fruits that grow out of it and the reappropriation of the land is important in this process of healing, and so is the association with indigenous culture and language.

Other compositions are significant as well, such as Mali Morris’s painting ‘Ghost’, 2017’ and Martha Kapos’s poem ‘Ghost’.  A large oval form interconnects with the ‘bright wide blocks and planes’ of the painting, suggesting multiple layers both in the picture and in the poem.  Therefore, the painting and the poem are open to several possible images, ‘a parasol, a bell, an ice cream cone, a crown’ and to emotional responses.

Other works explore the 1980s, as in ‘Cause & Effect, 1980’ by Basil Beattie and the poem ‘Days of 1984’ by Maitreyabandhu, or the natural world, as in ‘Dark marsh: silvered out, 2021’ by Judith Tucker and the poem ‘Winter Saltwort’ by Harriet Tarlo.  The blueness and myths of the Mediterranean world are articulated in the thin silk textile installation by Juliette Mahieux Bartoli, ‘Extrasolar, 2021’, and in the poem ‘Beyond’ by Julian Stannard.

The exhibition is displayed in two rooms in the peaceful environment of Southwark Park.  QR codes are available to access the recording of the poems.  A special event on Saturday 21 August at 3 pm will feature a panel discussion about the collaboration that made this enthralling exhibition possible.  This is an experience that encompasses visual art and language in an interaction that goes beyond partnership and opens up to marvellous, unexpected realities.