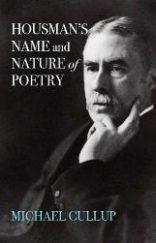 Housman’s Name and Nature of Poetry

In 1933, free at the time to deliver his Leslie Stephen Lecture at Cambridge University on any subject he chose, the 74-year-old Housman chose poetry – a perilous decision, one might think, for a man who, though a brilliant classical scholar, was no literary theorist. And there would infallibly be some formidable literary theorists present at the lecture.

The problem to which Housman gave such a sustained and unwelcome airing was that poetry had become less lyrical during his lifetime. Poetry had become more narrowly intellectual and rationalistic, and more ‘objective’. Shelley and Keats (for example) were despised by the modernists, who were much more interested in ‘difficulty’, Marxism, mockery, and reducing human experience to ‘behaviour’. For example, Auden’s object was to focus his readers’ attention on a society in need of reform. Hence the figurations of fear, dread, remorse, shock, and cancer let loose in Auden’s work. One would think that Auden was attempting to startle the reader into a weakened spiritual buoyancy requiring repentance, and thence cognitive reframing. Empson, too, wrote lines that looked arguably more like applied psychology than poetry. ‘And now she cleans her teeth into the lake’ is a rather off-putting opening line for a poem, especially a love poem. But for Empson and others love seems to have been levelled to physical activity and animal function. The reader feels the need to forget any emotional needs s/he might have had just to keep up with the poet’s cutting-edge cleverness. Empson was admired for his similarity to Donne, who could also be presented as modern in mood and attitude when it came to the nitty-gritty of sex.

The logical positivism of Russell and Wittgenstein formed a significant part of the backdrop. The elegant arrogance of the Bloomsbury school formed another. By the time Housman was to deliver his lecture on poetry, keen, frosty, and well-bred intellectual prowess was widely considered the most important thing. The spiritual climate was unpropitious to dreams, emotion, imagination, and poetry.

Michael Cullup’s book is very timely. Manipulative politics is now more than ever about getting people to face away from their own needs, never towards them. One remote but inevitable outworking of this mechanism is the lack of interest in poetry shown by educators who profess it, which by now in the 2020s has become almost flawlessly normalised.

Now, in an era of applied science and applied psychology, centralised organisation is irresistible and inescapable. It is no longer just in the forlorn utopias of Huxley and Orwell that we find people without love, goodness, evil, and hatred as we have come to know them during our lives and the history of civilisation. Without the poetry of feeling that Housman recommended, there is essentially one less safeguard against our lives becoming more barbarous. We do not know, and we cannot be, ourselves in any human sense as, unmirrored and unupholstered by poetry, we are coerced and micro-managed into becoming categories, and semi-abstractions.

Though his focus is not Housman’s own poems, Cullup does offer a striking and appropriate insight about them (and Housman’s well-founded confidence in them): ‘He knew their validity because he had intimate knowledge of their emotional cost.’

Here is just one little example of the compression of emotion in a few short lines with which a great poet can impart such freshening spirit. Read it. You might recognise yourself, in the first stanza, resolving to make the fresh new beautiful day the first of the rest of your well-lived life. You might also recognise yourself in the second stanza, stoutly maintaining that determination to keep the resolutions you have made and reaffirming that you will use your time wisely. And you might also see yourself, in the final stanza, realising that you have – alas, yet again – failed to keep up with the new, improved, and resolved you that you have just so recently reinvented.

However, reread the poem in the knowledge that its author, Housman, was a man savagely ashamed of his own homosexuality, and in unrequited love with another man, and you will begin to feel the pressure of personal meaning driving this poem of universal appeal.

Cullup’s excellent study of Housman’s Name and Nature of Poetry covers Houseman’s attitude to Dryden, Wordsworth, Coleridge, and Arnold, and offers many crucial insights about other poets and critics (not least Eliot) along the way as well. Cullup has rescued a bustling, traditional, and many-voiced attitude to poetry from oblivion – buried as it has been beneath the still-museums of modernism and postmodernism and God knows what else – and brought it back to life with reenergising immediacy. This is a most readable, most valuable, and indispensable book. Anyone who cares about poetry should read it.

.Andrew Keanie is a lecturer at Ulster University